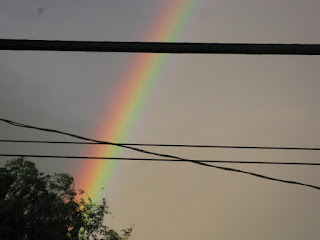 Even on this cold, rainy Seattle June day, the giddy joy of summer was ringing through the hallways of The Boy’s elementary school this morning. As Little Grrl and I made the rounds handing out end-of-the-year teacher gifts, every student, teacher, and parent we crossed paths with had that “visions of sugarplums” look in their eyes.

“Last day of school!” I called out happily to a first grade girl as we passed in the hallway.

“But not the last day of school ever,” she added with a knowing smile.

But for me, there won’t be another last day quite like this one.

Little Grrl and I headed across the empty schoolyard in the rain. I’d planned to walk to one of the many neighborhood coffeehouses, but a sudden wave of nostalgia washed over me.

Our old stomping ground. Of course she did.

We haven’t been there in a very long time, maybe not since The Boy changed schools. But that first year in kindergarten, when Little Grrl only had preschool two mornings a week and we’d drive past Irwin’s on our way home from dropping The Boy off at school every morning, we were regulars. It was just what we needed in those days. 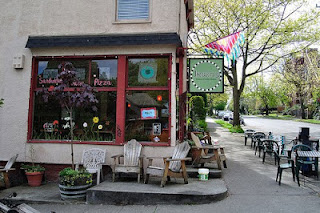 Some coffeehouses are sleek and austere, all dark shades and sophistication. Irwin’s is of the crunchy-cozy variety. Sunny windows, butter-yellow walls, and creaky furniture; lattes in painted mugs and big, lopsided, healthy-looking baked goods. It’s not as toy-intensive as the more intentional child-friendly coffeehouses in town, but there’s a comfy little nook with plastic dinosaurs and a basket of well-worn board books. Laid back hipsters, stroller moms, aging hippies, and work-from-home laptoppers share the space peacefully, without attitude or raised eyebrows.

It used to be the perfect place to unwind after the morning rush to school. Little Grrl would gnaw a plain bagel in contemplative, cooperative silence while I took my gentle deep breaths over the latte foam, releasing all that anxiety from turning over The Boy and all his volatility to school for six eerily silent hours a day. When she’d finished her bagel, she’d dig through the basket to find her two favorite board books and I’d read them to her absentmindedly, one after the other. Aliens. Lions. Then the aliens again. And again.

So much of my three years at home with Little Grrl was all about her brother. That wasn’t what I’d hoped for at all. I thought those three years would be our special time, just like the special one-on-one time I’d had with The Boy before she was born.

And we did have plenty of good times together. There were trips to the zoo and her favorite pizza place, long mornings playing at friends’ houses while the moms had tea, loads of raucous fun and exploration at Teacher Tom’s cooperative preschool.

But there was a heaviness there, too. She’d sit quietly in her stroller while The Boy’s kindergarten teacher and I would talk about the day’s challenges, brainstorming solutions. The following year she’d be tugging at my arm, bored and anxious while The Boy’s reading teacher would air his many grievances. She’d sit sad-faced and still in the principal’s office while her brother wept and squirmed in my lap and I willed myself into strength and silent power, navigating the conversation, staying on top of it even as I was running out of options. She’d be hastily dropped off at this or that friend’s house while I rushed off to yet another school meeting. 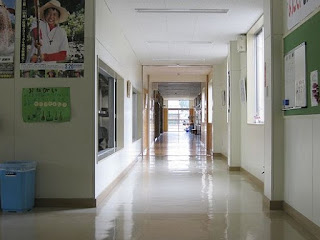 “Mommy, do you still love him?” she asked me one night when I was tucking her in. “Even though he got….a detention?”

And last year, as I was scrambling to hunt down a school district official’s phone number, hoping he could help me sort out the final details of The Boy’s placement at his new school, Little Grrl proudly walked over to my desk and handed me a drawing of a human heart. “Look, Mommy. A heart!” she said, as if she’d found the solution. My own human heart was absolutely breaking.

Things got better, thankfully. The Boy finally landed at a school that meets his needs, and Little Grrl had a fantabulous final year of preschool. She seems to have come out of the previous years’ darkness none the worse for wear, but I guess we can’t really know for sure.

How strange to be back at Irwin’s together, just the two of us after all this time. At five-and-a-half she seems positively grown up compared to the other toddlers and preschoolers milling around. She chooses an asiago bagel instead of a plain one. She pours herself a glass of water and finds us a table while I pay the barista. She sways her head and taps her fingers to a Creedence Clearwater song. And when a toddler in a tutu bursts into tears and wailing, the expression on Little Grrl’s face matches the mild annoyance of a young woman with a laptop sitting near us. “Ugh, too much crying,” Little Grrl remarks under her breath.

“That’s just what it sounds like when you cry,” I tease, and she gives me a teenager sigh. Then the conversation moves on to Irwin’s many varieties of scones and our plans for the summer. 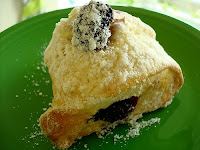 Like the first grader said, this isn’t the last day of school ever. But it is the last school day ever that Little Grrl and I will have the time and luxury to sit around our favorite coffeehouse talking about scones. In September she’ll be starting full-day kindergarten. And I’ll be starting a job.

I’ll be starting slowly at first, as a substitute special education teacher’s aide for the school district. But hopefully I’ll find a full-time special ed aide position before long. And the following year, with any luck, I’ll add part-time graduate school to the mix. I want to get my M.Ed. in special education and do this for real. I don’t know how any of these hopes will actually pan out. But right now, it feels like a calling.

And so ends the early childhood phase, the stay-at-home-mom phase. I have loved every minute of it… Baby Björns and Moby Wraps, tricycles and tire swings, stories and puzzles at the library, cooperative preschool, homemade play doh and shrinky dinks, hours upon hours at the Children’s Museum and Pacific Science Center.

I’ll miss it, but I think all three of us have been ready for it to be over for a while now. The Boy has an IEP and a supportive team at school. Little Grrl spends hours alone with her books and crayons these days; an independent spirit already. And when her brother is home, the two of them play together for hours on end. The Boy reads to her and puts on Simpsons DVDs for the two of them to watch. Sometimes they just sit around in their rooms, strumming Mr. Black’s guitars.

I used to yearn for free time to just sit around and relax. This year, I found myself using that free time to do more work – gardening, cleaning out the basement, volunteering in special ed inclusion classrooms at The Boy’s school. No doubt about it: It’s time to be moving on.

There are new challenges ahead. New ways for them to need me and new ways for me to support them. In some ways it will be better, in some ways not. But we’re on our path, and the path is turning in a new direction now.