Four years old. How did this happen?

There’s always this fear with the youngest child that you’re sort of missing them. It goes faster. There’s still wonder and little reflective moments, but they’re fewer and farther between in our faster-paced, schedule-driven life. Not much time is spent just sitting and gazing anymore. There aren’t as may firsts. There’s still amazement, but it doesn’t command the attention it once did.

Especially this year. Little Girl’s got a real Sixteen Candles thing going on, between her brother’s recent Aspergers diagnosis and some home improvement absurdities (more on that in a future post). We usually plan our birthday parties weeks in advance, including a delightful trip to Display & Costume to lovingly pick out the favors and napkins. Not this year. I don’t have a cake planned. I haven’t even bought her a present! I guess we’ll still find time to do all that, but still. Can’t help but feel a little guilty, being so preoccupied with all this other stuff as my sparkling girl turns four.

Despite our best efforts, she’s lived a fair amount of her life in big brother land. The first princess she knew about was Princess Leia. Baby’s First Laugh happened when he accidentally threw a beach ball in her face. One of Baby’s First Words was “Dine!” – thanks to her brother’s love of dinosaurs. She’d even try to say the actual dinosaur names: “Da-BILL-a-dot!” Potty talk, sass back, and Santa agnosticism all started at an earlier age for her. But man, you should have seen her hold her own that first year in preschool.

She’s been a prominent force in The Boy’s life, too. These last few months, something’s really clicked with them and they’ve become such friends all of a sudden. They act out Pokémon and Captain Underpants (there’s that big brother influence again). But he’s been known to play “hairstyle” with her, too. He reads to her. They build forts. They crack each other up.

It’s a beautiful thing to see unfolding – every bit as beautiful and wondrous as the baby gazing of yesteryear. But now, instead of languidly pondering the velvety eyelids of a sleeping infant, I’m overhearing snippets of priceless dialogue as I make dinner or drive them home from school or (yes) catch up on Facebook. It’s a less intentional kind of wonder. But it’s still there.

I love catching glimpses of her dancing to Imagination Movers in her car seat when she thinks I’m not looking. She’s got this great head-bob/finger-pointing move. I love overhearing her intricate imaginative games with her stuffed animals and Playmobil figures. All those different voices. She keeps changing their names. “Little Foal” becomes “Magical Glitter” becomes “Sugar Grape Pie.” I love her quirky love of florist catalogs and the recipe pages in magazines.

And I cautiously love her ever-increasing feistiness. I’m not sure, to be honest, if I’m ready to deal with the amount of feist that’s coming our way. But I’m glad for her. She’s going to need that strength and spirit. 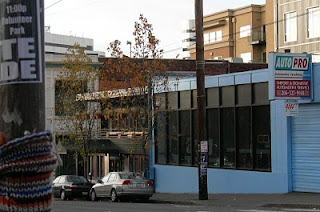 Her office is around the corner from our old apartment building – my first address in Seattle and the first place Mr. Black and I lived together. This can’t be a coincidence…can it? It’s such an unlikely location for an office like this, amid the hip furniture stores and hip coffee shops and hip apartment dwellers. How strange for us to be back here again after all these years, like the Ghost of Relationship Future haunting the younger version of ourselves.

On the days when I come here with The Boy, I try to point out some of the old landmarks to him. There’s our old building. That’s where we used to rent movies. He nods politely, but he’s way more interested in the new ice cream store a few blocks up the hill. Outside, I’m the only one with a school-age kid. But in the waiting room there are earnest, sensitive kids and their earnest, sensitive parents. I try to chat sometimes. Mostly, though, I just sit there reminding myself to breathe. I’m way more nervous than I ever thought I would be. The heart just pounds in spite of all the mind’s best reassurances.

At the end of the month, we officially confirm what we’ve already suspected. First of all, our boy is one “gifted” little dude. Tested off the charts. Literally. She had to map his results in the top margin of the page. He’s so gifted, in fact, that I’m taking the quotation marks off that braggy, antiquated term. I’m going to own it: Gifted. So there.

Oh, and one other thing. Aspergers. I’m going to own that one, too.

Funny how two years ago I was fighting so hard to prove it wrong. His preschool teacher was the one who first suggested it – at pick-up time, with my toddler girl asleep in my arms and The Boy running wild on the playground. Apparently, she’d sprung a last-minute fire drill on them the day before, and he’d had the king of all meltdowns.

A four-year-old melting down over an unannounced fire drill seemed like insufficient cause for this level of intervention. But the teacher was insistent. She had other reasons, too. Like his refusal to be hugged. Or his anguish at last-minute changes in the routine.

I was livid. I thought she was being awfully quick to label, and awfully unprofessional just springing it on me at the end of the school day like that. I was determined to prove her wrong.

Mr. Black, Zod love him, reminds me about it as we drive home together. “You realize this means that preschool teacher was right,” he teases.

“She was right for the wrong reasons,” I answer.

In those days it was all about Being Ready for Kindergarten. No one seemed to think The Boy was “ready,” and it pissed me off to no end. Really, “Is he ready for kindergarten?” was the wrong question. Might as well ask “Has he changed into a different person yet?” I knew something was up with the kid, even then. I decided to do an evaluation before the school year ended so I could send him to kindergarten armed with a diagnosis, naively expecting the school would roll out the red carpet of free services to help him. Isn’t that adorable?

Well…things didn’t exactly work out that way. I picked a therapist who was within our price range and available to do the evaluation immediately. Which is not how to pick a therapist, folks. File that one under “Don’t do what Donny Don’t does.” Her official diagnosis was “anxiety and depression,” which made sense at the time.

But it wasn’t enough to get the elementary school psychologist to take us seriously. The Boy's kindergarten teacher was supportive and tried to help me advocate for him, but to no avail. They chalked his meltdowns up to typical kindergarten anxiety. They said his academics were good, so this wasn’t really a special education issue. The school year was nearly over before we finally got our team meeting. With good friends, an excellent teacher, and a classroom aide (who was there for a classmate with Down syndrome) he still managed to have a good year.

But first grade? Not so much. Never before have his differences been so heartbreakingly pronounced (or, at times, so heartbreakingly misunderstood). I should have seen this coming, but I felt completely blindsided. It’s embarrassing to admit it, but I think all along I was secretly hoping he’d outgrow this. Somewhere in the deepest, most childlike part of myself, I believed that with just the right context, maybe the Aspergersish behavior would just…stop. But in those first weeks of the new school year, it became brutally clear that this wasn’t going to happen.

This time, it was a trusted friend who suggested we have him evaluated. This time, I went to our pediatrician first and got a referral. This time, I’ve had nearly two years to get used to the idea and the label doesn’t feel like a punishment or a cruel misunderstanding. It feels…fine. It fits. In many ways, it’s an incredible relief.

I don’t want to fool myself by imposing a sense of closure on this story, but it does feel like an end of sorts. Or a beginning. Or a really nice rest stop. Something. We have a clearer path and a tentatively emerging support system. I have a new level of acceptance for my son that, I guess, maybe wasn’t there before.

Next week, I’ll be making one last visit to the old neighborhood. I’ll catch a glimpse of our old apartment building and the window where I used to sit and wait for the UPS truck to arrive with my boxes from Philly. Here’s your future, Younger Self, I’ll think. Reader, you married him. You bought a house, you had kids, and now you’re walking down that same street to pick up copies of your son’s evaluation for his school.

And here’s some more good news – the old pizza place is still there. Let’s grab a slice and see what tomorrow brings.
Posted by Floor Pie at 8:39 AM 1 comment: