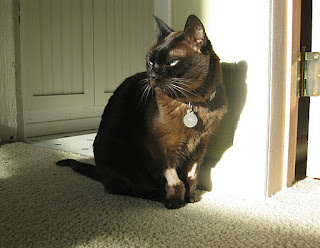 People keep trying to tell me, in the nicest possible way, that the cat doesn’t have much time left.

Really, it never takes much for me to imagine any given situation taken to its most dramatic and heartbreaking hypothetical extreme. This one doesn’t require much imagination. I’ve seen her blood work. I’ve spent the hours sitting around the emergency vet’s waiting room, sipping bad coffee and watching the accident-prone dogs and very, very sick cats come and go. And I’ve seen this all before with other pets – childhood pets, friends’ pets, family members’ pets.

It’s just that she doesn’t seem quite ready yet. She was overjoyed to come home from the vet’s on Thursday night. Just the way she sniffed the air was delight itself, moving her head this way and that, craning her neck and taking big enthusiastic sniffs like she can’t quite believe she’s back here. As if she’d begun to think maybe she’d dreamed the whole thing. She ran to her scratching post and gave it the scratching of a lifetime. She ran to Mr. Black and jumped in his lap. I woke up the next morning, as I have most mornings over the last sixteen years, with a sleepy, purry kitty on my head.

Once a crazy cat lady, always a crazy cat lady. In the beginning – before Seattle, before kids, before any of this – it was just me and this cat in a Philly apartment. We were like Mary and Rhoda. Anyone who knew me knew all about my cat. 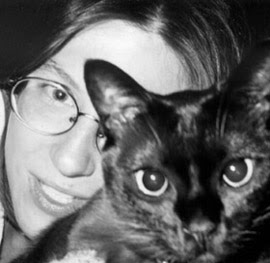 Earlier this week, when she was still at the vet, when I thought we might be losing her sooner rather than later, all I could think of were those early single-girl years. Getting a pet back then was such an act of affirmation. It said “Okay, I’m here, and this is where I’m going to be for a while.” Her feisty little presence filled in the uncertain spaces so beautifully; a fundamental layer between bored loneliness and the chaos of human company. And at the end of every absurdly bad date, every exhausting day at work, every disappointing job interview, every hilarious night out with friends…there she was.

And here she is now. Each front leg has a little bald patch where the IVs were. She spent most of that first day home sleeping under my desk while I hovered around her helplessly, wishing she’d eat and drink more, bringing her little meals and bowls of water to no avail. Occasionally I’d try to put her in my lap, but she’d just give me that one-ear-back look and return to her spot.

After the kids were asleep, Mr. Black and I made our first attempt at administering subcutaneous fluids. Have you heard about this? Here, let Dr. Mike explain:

So, there you have it. Set up a hospital-style fluid bag, jab a nice sterile needle under the cat’s skin, and let those fluids flow, all in the comfort of your living room. I’m going to be honest: There isn’t a component in that process that doesn’t fill me with dread.

Mr. Black and I bumble around with it every night, just like the very earliest days of parenting when we’d team up for every diaper change. We try so hard to stay calm and professional, but we’re both in way over our heads. We had to bring a wobbly old floor lamp up from the basement so we’d have somewhere to hang the bag. Sometimes the cat lurches and squirms, nearly working the needle out, getting tangled in the line. I actually stuck myself with the damn needle tonight and had to start over with a fresh one. I just hope the floor lamp doesn’t come crashing down on my head one day.

But in spite of all the awkwardness and absurdity… we’re doing it. I think it’s working. She’s so spry all of a sudden. That first night, the minute we were done with the fluids, she walked right over to the dish of food she’d ignored all day and started chowing down. Then she hopped into our laps and the three of us all just sat on the couch in a daze.

We were supposed to be flying back east next week for the Big Christmas Visit Extravaganza. But I can’t leave her now. I want to make sure she stays well. And if she doesn’t…well, I don’t want to hear about it over the phone from a cat sitter. On the one hand, it feels a little embarrassing and very crazy-cat-lady of me. On the other hand, it feels absolutely essential.

My parents and sisters have been incredibly understanding and supportive. The kids were disappointed at first, but they quickly warmed up to the idea of spending Christmas in their own house. So, haul out the rain boots and foam up the lattes, because it’s Christmas in Seattle this year. 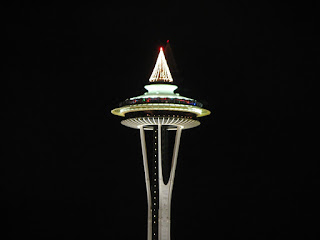 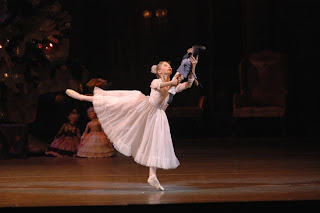 Little Girl turned five yesterday, the same day as our preschool trip to see The Nutcracker. It doesn’t get much better than that.

I had a little moment there, just as “March of the Children” began, when I turned my attention from the lavish production on stage to her mesmerized face in the dark. She was perched on the edge of her seat, holding an armload of stuffed animals, clearly recognizing the song and delighted to see it come to life so vividly in front of her. I nearly started to cry.

There’s a joy in this girl that just about breaks my heart sometimes. It’s so pure, so free from the fears and self-doubt that come later in life. She throws herself into the things she loves with full force, unapologetically. She is my girl in motion – swinging on the playground for incredibly long stretches, mired in a gorgeous world of imagination. She adorns herself in mismatched pinks and sparkles. She narrates as we go about our daily business, or holds conversations with stuffed animals and imaginary friends. And her joy in her real friends is enormous, especially when they join in her story-playing. She’s even got The Boy doing it. They can play for hours, those two, just making up stories and acting them out.

I see so much of my childhood self in her, it’s a little scary sometimes. Scary, because I know what comes next. You turn all that love and imagination and intensity loose on the world and, well…mixed results, at best. There will be people who get you and love you for being your rather unusual self. Others, not so much. She has no clue yet, bless her heart, about people who want to take others down a peg with rigid standards of “normal” and “feminine,” or just plain competition. She can’t begin to fathom that there will be people who won’t love her as much as she loves them. Knowing that this awaits her is almost too much for me sometimes. Will her spirit survive it?

Well…yes. I think her spirit will do just fine. She’s got so much of it to begin with, not to mention a mother who’s been through the woods and back and could maybe help show her the path, if she’s willing. That’s what I keep telling myself, anyway. Might as well enjoy that unbridled innocence while we have the chance.

Happy birthday, Little Girl.
Posted by Floor Pie at 12:16 AM No comments: