When the Working Day is Done 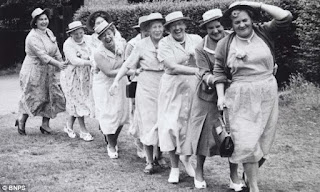 My new job is like a double-crack latte sometimes, and I mean that in the best of ways. I love it. Even the really tough days are such a charge. Sometimes I wake up in the middle of the night and can’t fall back asleep because I’m full of ideas for the next day. Sometimes these ideas fall flat, and sometimes they absolutely soar. Sometimes I come home and find myself exhausted and extremely short on patience. But, more often than not, I find myself over-energized and…seeking.

There’s no school this whole week for parent-teacher conferences. “Welcome to Miller Time,” said I, tearing into my delicious Friday with joyous abandon. By Monday, though, I found myself outside in the relentless early morning November rain in my Crocs and jammies, desperately raking soggy leaves off the sidewalk for sheet mulching.

Mr. Black was still in bed when I dragged my drenched self back inside. I tried to make light of it.

“Ever notice that whenever I’m not at school, I’m doing some crazy gardening project?” I said with a smile.

Oh, he’d noticed, all right. Lucky for both of us, he finds it endearing. But I wonder how long before the cuteness wears off.

The wild energy doesn’t just pour itself into home improvement projects. It seeks fun, too. Not sex/drugs/rock-and-roll per se, but whatever the geeky forty-something mom version of that might be. I yearn for a social life that’s every bit as vibrant and over-stimulating as my work life, and it’s simply not available to me anymore.

Sure, there’s Facebook and the occasional meet-up with friends. There are date nights and pillow talk with my sweet honey. There’s lots of raucous horseplay and general silliness with the kiddos, which probably comes the closest to meeting this newfound need for speed.

But I miss happy hours that lasted all night and ended with diner breakfasts and falling asleep on each other’s floors. I miss how forthcoming we used to be about our hopes and fears. I miss ill-advised drunken kisses and crushes where you actually had the option of telling the other person how you felt. I miss my old friends.

I kind of miss my new friends, too. We’re all so busy, so partitioned off from each other with our families at our centers. That’s as it should be, of course. But I can’t help it. I miss other grown ups. I just do.

I’m sure I’ll be feeling more at ease next week when work starts up again and I can pour all this energy where it belongs. For now, though, I wouldn’t say no to a little responsible-version-of-fun. Friends, you know where to reach me. 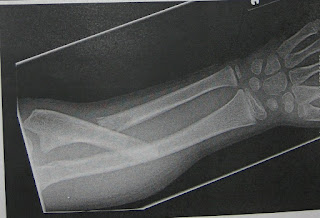 I thought he’d gotten himself in trouble. His teacher’s face was so serious as he stooped over, one hand across The Boy’s shoulders, rushing him off the playground toward the principal’s office. The Boy’s face bore an eerie look of zoned-out defiance.

“What happened?” I asked, privately irritated beyond belief by whatever it was he’d done to make his teacher so upset.

“I think he’s injured. I don’t like the way that arm is hanging,” the teacher replied gravely as they hurried past.

“What happened?” I asked again, but they’d already disappeared into the building. I ran after them, still not quite believing it. Turned out he’d fallen off the monkey bars, going super-fast to impress his friend.

The school nurse was gone for the day, but it was pick-up time and there were lots of parents around. One was a nurse and another was a PA. While I uselessly attempted to hold an ice pack on the wrong arm and fumbled with a borrowed cell phone, they set to work making The Boy a splint out of an ace bandage and an old cardboard box.

The PA gave me a subtle look that simultaneously said “What a precocious little guy” and “Yeah, no, that arm is totally broken.”

“Ohhhh. When is this ever going to be overrrrrrrr?” groaned The Boy, holding his homemade splinted arm at an awkward angle, trying unsuccessfully to enjoy a Star Wars movie. 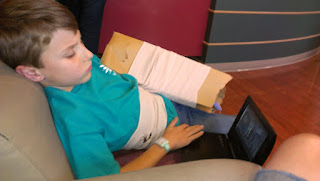 I used to love hospitals as a child, almost as much as I loved airports and hotels. Curious George Goes to the Hospital was my favorite by far in the George canon, and I adored the Fisher Price hospital playset with its X-ray machine and groovy little goldfish pond on the grounds. When I had my tonsils out, I was secretly thrilled to get to stay overnight. As an adult, I even enjoyed my extended stay in the postnatal ward recovering from my C-sections, ordering vanilla milkshakes and getting acquainted with my wrinkly little newborns. Now, though, the fluorescent lighting, incessant waiting, beeping, and crappy TV reception could just kiss my grits. The Boy was poked and prodded and blood-pressure-cuffed and morphined. Let me tell you, if you think it’s fun to Sherpa an Aspergers child through a massive and uncomfortable routine change, just try it when the Aspergers child is on morphine. On the plus side, he loved watching the wrist watches on the Home Shopping channel.

“I’m very concerned about radiation exposure,” The Boy insisted to the tech as she wheeled him into the X-Ray room. She was kind and respectful enough to engage him in a real discussion about the safety precautions they would be taking, which now makes me wish I’d gotten her name so I could send her a nice basket of Thank You pears or something.

His shirt, I noticed, was still covered in wood chips from where he’d fallen on the playground. His hands were still filthy from spending most of the day on an all-school field trip to a nearby beach, and his socks were full of sand. Such a strange, oddly heartbreaking juxtaposition in this sterile hospital room.

Finally, seven hours later, he had a fresh new cast and we could finally go home. “I actually enjoyed small portions of that experience,” he remarked.

I’d only intended to take one day off from work. One day to chaperone the field trip at my kids’ school, and then I’d go right back to my new job as a substitute special education assistant. (Although “substitute” is really a misnomer. More often than not, it’s a lot more like being a temp.)

Anyway, there’s a lovely built-in flexibility to subbing/temping/whatever that suited this situation perfectly. I had to give up an assignment I really enjoyed at a developmental preschool. But when The Boy was ready to go back to school full-time, I was able to line up a new assignment in an EBD program that’s been working out beautifully so far.

Maybe a little too beautifully. The team and the administrators really like me. I really like them. The students are absolutely nothing like any students I’ve ever worked with before, and they challenge, frustrate, charm, inspire, and absolutely break my heart. Sometimes I amaze myself. Sometimes I can’t believe the stupid mistakes I make. Sometimes I’m so fried at the end of the day, I simply don’t want to go home and scrape up the energy it takes to be with my own kids.

I don’t know how I feel about that. 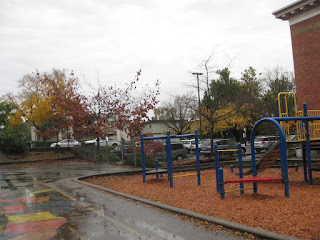 Mr. Black does pick-up and drop-off now, and he’s gradually starting to know more about what goes on at school than I do. He knows the parents of Little Grrl’s new friends. He gets the compliments from their teachers. He even coordinated and hosted a playdate last week.

My new mentor insists that I need to push through the discomfort and give my kids and myself the space to pursue our own paths. “You need to let go,” she keeps saying.

Another mentor of mine would probably agree. He’s fond of telling this story about a mother who was a notorious helicopter parent all through her daughter’s preschool years. Sure enough, on the first day of kindergarten, her daughter fell off the playstructure and broke her arm.

“It happened because I wasn’t there,” said the mother.

“It happened because you were always there,” is the response.

And indeed, I can’t help but notice that The Boy happened to break his arm on the one day I took off from work to be with him at school. That last hour at school, after we’d come back from the field trip, was such a tumultuous one. I’d shuttled back and forth between both kids’ classrooms, spent too much time in Little Grrl’s art class and missed meeting up with The Boy when he expected me. By the time I found him, he was having a mini-meltdown in the hallway with his special ed teacher because I was late.

He’d managed to cheer himself up and go join his class on the playground. I stayed behind to talk with his special ed teacher. And that’s when it happened. That’s what I was doing when I saw his teacher rushing him inside.

The Boy is very athletic and a joyful risk-taker. He’s taken dozens of scarier falls in his day with barely a scratch or tear. Did my being there throw him off his game somehow? Did it collide the worlds of Home and School and create such a sense of disequilibrium that he lost his balance on the monkey bars?

Conversely, is my not being there messing him up in ways I don’t know about yet? I can’t read his daily behavior report without knowing that I write those same daily behavior reports for my students, too. And while the reports cull it down to the basics and provide the most essential information, they don’t even come close to telling the whole story. There are volumes of subtleties and nuance that I simply do not have access to anymore.

The Boy’s arm has been healing beautifully, and his days at school have been relatively trouble-free. When there are challenges, he works through them with the special ed team at his school, just as my co-workers and I work through challenges with our students. And in that sense…well, we’re all part of the same “village.” That’s the best I can hope for, anyway.

“Love is proved in letting go,” goes the line from some poem I read in high school whose title eludes me. How convenient if that were really true. How painful. How simply real. 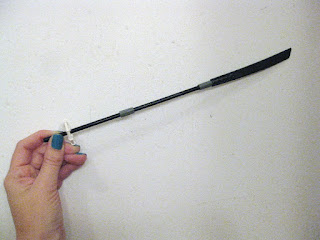 He built himself an under-the-cast scratching device out of Legos, which I spent a fun-filled evening extracting. The fun, oh it just never stops.
Posted by Floor Pie at 12:46 AM No comments: