Right Through the Very Heart of It 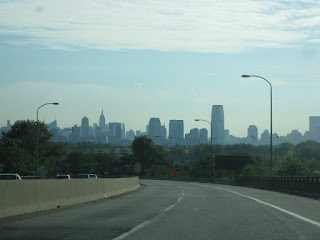 It’s been so long since I’ve seen the Manhattan skyline, I actually whip out my camera and start snapping blurry shots of it from the passenger seat of my aunt’s car.

“I’ve lived in Seattle for so many years, now I get to act like a tourist,” I joke, but my aunt appreciates the enthusiasm. It’s fun to see your city through the bright eyes of a visitor.

And I have to say, it’s unexpectedly fun to be that visitor. Since graduating from college I’d come to regard New York City as something of a pain in the ass – a very beautiful, culturally rich, greatest-city-in-the-world kind of pain in the ass, but a pain in the ass nonetheless.

As a girl I had this very naïve and sort of adorable fascination with Manhattan, largely informed by my 3rd grade social studies class and from watching Rhoda with my mom. I believed the New York Life office across from Friendly’s must be some kind of AAA for people who were planning to move to New York City, and I’d stare at it dreamily over my grape sherbet cone, imagining the day when I’d be all grown up and moving there myself.

I took my first trip to New York the following year with the Girl Scouts, and my dad bought me a plastic souvenir folding fan with different New York City landmarks. I spent much of the next day just lying on the couch, gazing lovingly at that fan, ever-so-slowly folding and unfolding it as I plotted my return.

In high school came the Broadway musical fascination. During the long months in between family or school trips into the city to see the actual shows, I’d immerse myself in cassette tape soundtracks and pore over old programs and back issues of The New Yorker trying to learn all the names and basic plotlines of all the plays. And I loved New York like a crush. I’m not sure when this unbridled enthusiasm for the city faded, or why. Given the naivety and intensity of my New York fascination, I guess it’s fair to compare it to a tween crush on a boy band or Twilight actor or some such. Eventually, you grow up and get over it…or redirect that energy to a slightly more sophisticated crush.

Driving in now, seeing the starkly altered skyline after all these years, it’s inevitable that we start talking about 9/11. At the height of my New York geekitude, I adored those towers. But my aunt explains that they really weren’t all that iconic for her, or for anyone else who was around when they were being built. Everyone hated the design. A whole neighborhood was uprooted and obscured under its looming shadows. I’d never thought of it that way before. 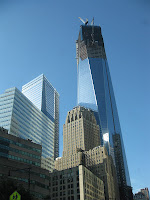 A brief family visit in Brooklyn and a subway ride later, and I’m sinking into a cozy chair on the immaculately tranquil deck of the Hope Lodge, waiting for one of my dearest, sweetest, those-were-the-days-iest friends from college who’s here recovering from his latest bout with Hodgkin’s lymphoma. There’s a partial view of the Empire State Building from the deck. What the hell, I figure, and snap a few shots of that too.

“Are you tired of talking about it?” I ask him as we’re settling in together. He says he’s not. And over the course of the next few hours, he tells me all about these bizarre last few years.

Two more friends arrive, and just like that the band’s back together. We are unapologetically delighted to see each other. Hugs all around. Even with the graying hair and general older-ness, we all agree that each one of us looks exactly the same as we remember.

The last time the four of us were together was in 1997. Before that? All four of us? I’d have to say 1991, the fall after we’d graduated, convening in Princeton to say goodbye to the Austin-bound friend, and to say goodbye to each other one last time. We went to the good sub place and splashed around in a fountain, playing and laughing together like it was just another night with the deadbeat club.

In those days I loved all three of them with the same wide-eyed naivety, intensity and overall geekishness with which I’d once loved New York itself. I knew this was truly the end of the deadbeat club as we knew it, and I couldn’t bear to think of what lay beyond. I don’t think any of us could. 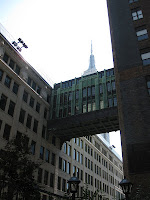 Now, here we are, half a lifetime later. Grown up. And you know what else? Happy about it. There’s a sense of peace and resolution here that we simply didn’t have in those days. We speak more slowly and thoughtfully. We listen more attentively. The conversation just flows. I feel like I could sit here with them for days on end, just letting all our stories from the past 21 years pour out slowly and trickle over each other.

When it’s time to say goodbye, I stand in the elevator hitting the Door Open button again and again because our conversation is still in full swing. Finally I let it close.

This might really be the last time I see any of these friends. Or not. But the impulse to cling to it desperately is gone, along with the impulse to gaze backward lovingly out the bus window at the receding Manhattan skyline. I lean back in the seat and close my eyes, eager to be back at my parents’ place with my kids.

I don’t need to cling to any of this, because it’s already here. New York – my city that’s not my city anymore; never really was my city in the first place except in my imagination. My friends and the sweet mythology of our time together. For all our collective anxiety about growing up, we could never have predicted any of the challenges we’ve faced or are still facing. Each one of us is stronger and more capable than we’d ever given ourselves credit for. And so are the friendships.

Things are changing, always, and we’re each on our own very different and rarely intersecting paths. But we still matter to each other. And we know now that we can always find our way back to each other when we need to. 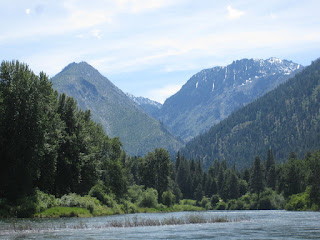 Too busy having a summer vacation to write much these days. It's so rare that I find myself simply, happily grounded in the present that I've just got to savor this while it lasts. Mountains. Beaches. Bikes and swings. Pineapple-basil gelato. Old wine barrels of snap peas and tomatoes.

The Boy staying up late in his new room, strumming his father's acoustic guitar until he feels sleepy. Little Grrl in her tomato-red shirt and black flowered skirt, moving sometimes with caution and grace, sometimes with joyous abandon. Ebb and flow, risk and retreat and risk again. Just like her brother before her, she’s tapering into the body of a big kid; wily, long-legged, and independent. 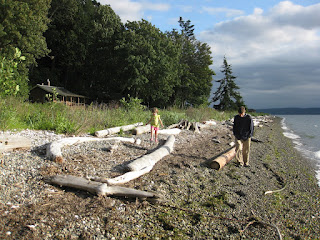 Sweet, sleepy stubble-faced husband sleeping in with me just like we used to, kids grabbing their own bagels for breakfast and playing together. We cuddle and doze under the ceiling fan. Our bodies are so different now, older and with all the imperfections that brings, but so familiar to each other. We fit. There will always, always be that place on his shoulder where my head rests so easily. There will always be our wedding rings clacking together when we hold hands.

The kids and I are leaving in a few days for the Big East Coast Extravaganza. Haven’t been back east with my people in almost two years. For a while there, the trip started feeling like too much of an adventure, what with all the other sturm und drang of the early parenting years. But I’m ready to take it on again. The airports. The Beltways. The heat, Zod help me. The nomadic lifestyle, traveling from relative to relative, state to state, guest room to guest room. It’s an adventure, all right. And even under the wackiest of circumstances, we always manage to have fun.

I’ll be back at the end of the month…maybe with something to write about, maybe not.

Enjoy the summer!
Posted by Floor Pie at 10:45 PM No comments: