When Sister Got Hitched 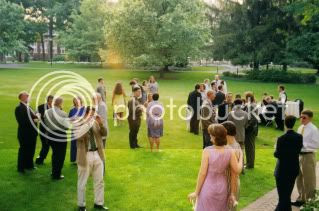 It was ten years ago – ten! – that my sister married her longtime boyfriend. In the years that followed, there would be an avalanche of family weddings, including my own. But hers was the first. And hers was the one that ushered in a new era in which we learned to stop worrying and love TheKnot.com. (Or maybe it was Gloria Steinem’s marriage, six days earlier, that paved the way. That didn’t hurt.)

In those days our generation, or at least our little corner of it, just wasn't that into weddings. And when they did happen (with the exception of a few good friends, of course), it felt somewhat alien. I knew girls at work who talked endlessly about their weddings. They were typically the same ones who talked endlessly about dieting and looked with disgust at a plate with anything resembling cheese on it. This was the same sort of person who would ask if I minded that my younger sister was getting married first.

Um . . . no. But thanks for your concern. Have another olestra chip.

I truly wasn’t the least bit jealous or upset. But my sister’s engagement opened a door of sorts – a door I’d assumed was mostly meant for neat and polished people who were happy in cubicle land, who raced toward the superficial trappings of adulthood like we raced toward the prom in high school; those color-coordinated girls and their housebroken boyfriends who obediently wined and dined and sent elaborate flower arrangements.

It wasn’t that I couldn’t attract this sort of boyfriend myself. I simply hadn’t the least bit of interest in such a man. The guys I fell for were all mired in existential angst, darting their eyes and tossing their heads like frightened horses at any notion of conventional cubicle-bound adulthood. They were in academia, or performing arts, or underemployed slackerdom with vague artistic ambitions. When I met Mr. Black, for example, he was teaching one college course a week, working on a novel, and writing music and movie reviews to make ends meet. Sure, he’d thrown in the towel and started applying to law schools, too. But even that meant three more years of studenthood. Sign me up!

I loved the slacker life. I loved my old apartment with its dark brown shag carpeting, I loved my Nick at Nite (which prominently featured “Rhoda” and “Mary Tyler Moore” reruns in those days), I loved the open-ended adventures in hilarious absurdity when I went out with my friends. I didn’t want my life to change very much. I just wanted a little romantic companionship – someone who would lie around with me all weekend instead of running off to go do something, someone who nevertheless had remarkable depths of intelligence and wit, and someone (this was the trickiest requirement with these guys) who even wanted a girlfriend.

Mr. Black embodied all of these things and more, and I’d followed him into the misty, cloud-mottled sunset of Seattle to co-slack forever in harmony. The notion of marriage seemed a bit beside the point.

And then, suddenly, one of my own was crossing over. I don’t ever remember my sister yearning or aspiring to marriage for marriage’s sake. Right up until the day she got engaged, we used to commiserate about people asking her when she planned to tie the knot. But she absolutely wanted to be with her guy. They’d been friends for years and together through all sorts of post-grad adventures. In lots of ways, they’d grown up together, and he was already a de facto member of our family. The fact that there hadn’t been a formal celebration to acknowledge it never occurred to me.

But now that there was a formal celebration on the horizon, we were quick to embrace it! Flowers, cakes, dresses, decorations – these were no longer superficial trappings, but an elaborate palette with which to create our very own two-part season finale Wedding Episode. This wasn’t just some wedding; this was our sister’s wedding, and we planned it with the joyful abandon of all our childhood Christmases, birthdays, and Halloweens put together.

My long-held aversion to All Things Girly began to soften as I ventured into previously unknown territory. I tried on sleek gowns at Nordstrom. I bought my first (and last) pair of high heels. I even bought a copy of Martha Stewart Weddings magazine and started squirreling away ideas for my own hypothetical wedding . . . and started hinting to Mr. Black that I kind of wanted one. And, the day before the wedding, I joined my sisters and cousins at the nail salon for my first pedicure ever. (This girly stuff wasn’t so bad after all. Except for the high heels.)

The wedding and reception took place on an idyllic university campus where the bride, groom, both sisters of the bride, and many of the guests went to college. Just to ratchet up the nostalgia factor even more, we were all staying at the same fancy hotel that anchored a once-ritzy mall and movie theater that were popular destinations back in the day. I’d seen Fatal Attraction there. And Who Framed Roger Rabbit? And Graffiti Bridge.

Old familiar places are usually so evocative for me. On a visit to Philadelphia, for example, I was walking across Rittenhouse Square and felt suddenly overcome by a sense of longing and loss – for what, I couldn’t say. But when I lived there, I did tend to wander around that part of town while sorting out this or that heartbreak. Perhaps I was feeling the cumulative sense of those wanderings; a visit from the Ghost of Drama Past.

I expected to feel something similar, being back on my old college campus after all those years. But I didn’t. Nothing. It just felt like a place, like any other place. And there was a wedding to rehearse, a Pablo Neruda poem to practice reading, high heels to break in. All the old spirits were either at rest or exorcised by the presence of our older, relatively wiser selves. The past was, well, past. One star in an elaborate constellation.

At the reception, I stood on the porch where I’d received my diploma nine years earlier, gazing out at a sunny lawn flocked with aunts, uncles, parents, cousins, and friends from every era. And I realized just how optimistic it was, this whole wedding thing. It wasn’t just about the event, or even marriage itself, necessarily. It was simply the living, breathing affirmation that – married or not – we could form our own center. No more kids’ table, no more adolescent eye-rolling at the fringes. We could be adults in the conventional sense, without fear or ironic detachment; without losing our spirit or our individuality.

You don’t need a wedding to do that. But it took a wedding for me to fully realize it.