“You know the difference between a hockey mom and a pit bull? Lipstick!" – Sarah Palin

As the applause thundered throughout Palin’s speech, I felt like I was back in 7th or 8th grade again, trying to will myself invisible or at least tune out the taunts of my classmates. Ah, the Dawn Wiener years. And even though I’ve done my best to repress it, the knee-jerk physical memory of that time catches in my throat whenever I hear a crowd jeering in its victorious rejection of people like myself. 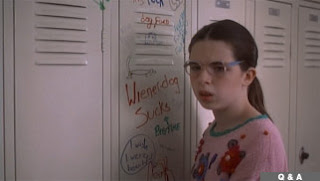 That pit bull line reminds me of a former co-worker who once described, with great self-righteous indignation, how she’d grabbed a woman by the shirt and slammed her into a wall because the woman had accidentally bumped into my co-worker’s small daughter at a crowded Wall E. Weasels. It also reminds me of my friends whose toddler bit an older child at a crowded children’s museum (through his jeans, no broken skin). The victim’s parents not only refused to accept their many sincere apologies and concern, they screamed at my friends and followed the family all through the museum, followed the mom into the ladies room, verbally harassing the parents, demanding their phone number and medical records, threatening the museum with legal action.

That, to me, is what a pit bull in lipstick looks like. Timid types like myself tend to reject these folks in the first place, and it’s not about elitism. We’re just not big on being a target for someone’s displaced aggression.

Earlier this year, my state was dismissed by a political surrogate as a bunch of “latte-sipping elitists.” And while I was tempted to just scoff it off, I had to think about it. I do drink lattes, after all. Maybe they were onto something. I’ve recently questioned my long-held rejection of my small Pennsylvania home town, realizing at last that adolescence is a train wreck no matter where you grow up, no matter how privileged you may be. As a shy, quirky, anxious girl in glasses, I would have been harassed no matter what.

But it’s a hard thing to unlearn. A small town upbringing may not have harmed me, but it really didn’t do me many favors, either. Teachers espoused anti-Semitism, homophobia, and creationism with impunity. A classmate’s tragic suicide was co-opted into an insensitive war-on-drugs circus. One American history teacher had us convinced that brutality to slaves was a myth. His reasoning? “Slaves were property, like a car. You wouldn’t beat up your car, so slave owners didn’t beat up their slaves.” Oh. Okay. But we believed it.

My parents were Vietnam-war-protesting Jimmy Carter supporters, bleeding hearts through and through. But the racism, the homophobia, even the sexism of the community still managed to seep into my sensibilities. It wasn’t that I consciously believed it. There wasn’t a speck of hate in my heart. But I’d learned to be complicit to fit in. In a town where supporting Walter Mondale made you some kind of a radical, I accepted without question that an all-white, straight community was Us, and assumed I’d never actually intersect with Them.

And thus, young Floor Pie packed up her paisley sweaters and went off to a small east coast liberal arts college.

I’d been an outcast nerd for so long. The Dawn Wiener years ended with junior high, largely because our high school tracking program finally separated me from my detractors. The meanest ones would still taunt if our paths crossed in the hallways, but we were in different classes and different lunch periods now.

But even as I was making friends and getting involved in theater and music, I was still quite the asexual oddball. I’d yearned for college, and when I finally got there it seemed better than I ever could have imagined. I met people who were creative and proud to be smart. They liked their high school English teachers too! They didn’t like Ronald Reagan either! They introduced me to Kate Bush, Suzanne Vega, and Robert Smith. I’d found my people!

Until I blew it. My farm-fresh ignorance cringingly revealed itself over the first few days, and the cool kids dropped me like the nerd I’d always been. There was a trip to Manhattan I wasn’t invited to, but found out about afterwards. There were times when I’d see them see me coming and they’d hastily duck out. Some were catty, some ignored me, some tried to be patient and still let me hang out, some were downright mean. After a few weeks, I retreated without making too big an ass of myself.

So there I was: rejected by both sides of the culture war, settling among the mainstream 80’s girls on my freshman floor to be their loveable token weirdo. It was more frustrating than painful, really. I could see exactly how my ignorance and over-anxious enthusiasm had caused me to forfeit a place at their table. Crappy as they’d treated me, I still identified with their intelligence, their pop culture, their whip-smart senses of humor and irony, their politics. These things spoke to who I truly felt I was at heart.

Thankfully, my social life, social skills, and political savvy improved over time. I found a happier niche with a merry band of alternageeks, and those years still have a special place in my nostalgia file. But I never reconnected with that first group of would-be friends. Sometimes I imagine they’re out there stumbling upon my Facebook profile or my listing in the alumni magazine. I can just hear them scoffing smugly to see that I’ve ended up a stay-at-home mom. “Sounds about right. That’s about all she was cut out for.”

Yeah, maybe I’m still bitter. But I haven’t let the bitterness trip up my (oh, forgive me) journey of self-discovery. I could have taken this college experience and parlayed it into the disgust for “liberals” or “elitists” that so many seem to share. But that wasn’t it for me. I had to suck it up, hang back a little and just listen and learn. Hate the arrogance, not the ideals. It would have been nice if those guys had given me more of a chance. But at least I still gave myself a chance.