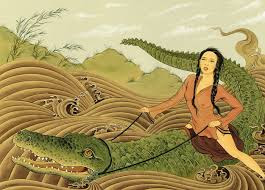 The other day, our yoga teacher taught us about Akhilanda, a goddess whose name literally means Never Not Broken. Strangely apt.

So, winter break draws to a close and a new decade begins with an entire continent on fire; begins with another country bombed by orders of a petulant impeachee; begins with children who should be my students by now still caged and traumatized at the border, and my social media feed is mad that not enough people know or care. 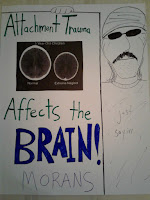 The social-media shaming about our silence and complicity really stings, I’ll admit. I mean…I still haven’t done anything about any of it. Two summers ago I held up this sign at local rallies. Every so often I send little donations here or there. There’s a part of me that sees the news and rages and dies inside, believing I should be out there burning shit down instead of feeding the cats and taking down the Christmas tree. But here I am.

It’s been nice having two weeks off…not just from work, but from the whole swirling vortex of humanity that is public middle school special education. It’s been nice to clean my house, go to movies, eat full meals, and spend time with family and friends like an actual human person.

When I dive back in on Monday, I won’t be sorry. I’ll simply enter a different dimension; switched from ‘off’ to ‘on’; a swimming pool opening for Memorial Day weekend, busy and flooded and serving its purpose. This is my purpose.

And I don’t mean “this is my purpose” in a grandiose way. I mean it simply. Functionally. Not heroically. Less like Wonder Woman, more like…I don’t know, a toaster oven or public transportation or something. A mundane and necessary miracle that’s actually widely available and everyone’s gotten used to by now. I’m a toaster oven that loves being a toaster oven because I AM A TOASTER OVEN. What else can I be?

But, while we’re all still in a New Year’s reflective state of mind, I’ll also add that this whole business of becoming a special education teacher kind of was my own little ‘hero’s journey’ of the past decade. It started with The Boy, who will be turning 16 this year and that part is no longer my story to tell. Suffice it to say that through his story, I found my way in to this chapter of my own. It felt heroic at the time. It felt like I’d saved my own kid from a burning building and then went running back into that building to save as many others as I could.

I believed in my heart that I could work for and within that system without being coopted by it. And…you know…I sort of can. But it doesn’t look or feel anything like you might expect. It’s lonely. It’s strategic. It’s political. It’s complicated. It's fraught with opportunities to fail. It’s just hard work. Hours upon hours of relentless work. There are folks who would have read my blog and cheered me on back in the day who pretty much think I suck now, or that my school does. One of my best friends and mentors used to tease me about ‘siding with the oppressor.’ Meanwhile, among my colleagues and administrators I am always and forever Luna Lovegood at the Ravenclaw table. Quibbler, anyone? 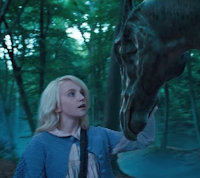 And so, between the sober reality of being more toaster-oven than heroine and the even-more-sober reality of our literal world being on fire/at war/doubling-and-tripling-down on the intentional traumatizing of children at the border…I have to say…I still kind of want the cape.

I want my little endeavors in my little corner of this doomed world to count for something, It has to mean more than just scrambling to stay afloat at a challenging job while Australia burns into the sea. Even (especially?) in the context of this post-45 apocalyptic terror storm we're all living in, I need to believe that the work I'm doing is somehow part of a solution. I want this story – this 10+ years story that is the Floor Pie blog – to have an uplifting ending, and I want Tina Fey to play me in the movie version.

Basically, I just want to keep telling this story like it’s a story…not like the middle class medium latte with a side order of compromises and Powerpoints that it actually is. My being-a-toaster-oven notwithstanding, there truly are still loads of good strong stories to tell. Maybe this year, some of them will find their way to the pages.