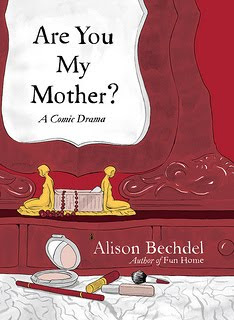 Gaaah. Just... Mm. I do wish I had something articulate to say about Alison Bechdel's new graphic memoir, something worthy of it beyond "You this read now" and maybe a few cartoon exclamation points for effect. Why do I love this book so much?

I just read a pain-in-the-ass review of Are You My Mother that whines about how it's not as "good" as Fun Home: A Family Tragicomic, Bechdel's first graphic memoir that unravels the intricate narrative of her closeted father's possible suicide and her own coming out story. And yes, of course, Fun Home is beyond amazing. But why would we want her to write that book twice?

Are You My Mother isn't some blockbuster sequel exposing even juicier family secrets. It's more like a very thoughtful commentary as the author absorbs her mother's reaction to Fun Home and examines their complicated relationship through a myriad of cultural and intellectual lenses – Virginia Woolf, Stephen Sondheim, A.A. Milne, psychologist Donald Winnicott, The Drama of the Gifted Child.

It's introspective. Über meta. Cerebral-licious. All of my favorite flavors. I've been a huge fan of Alison Bechdel for years, but this is the first time I've ever wanted to climb into the pages and give her a hug. Several hugs. Sigh.

Okay...I'm just going to immerse myself in this book, then re-immerse myself in Fun Home again, and then maybe re-read the entire Dykes to Watch Out For canon for good measure. See you at the library.

Updated to add:  I'm realizing now that the reviewer unwittingly made himself the Charles Tansley to Bechdel's Lily Briscoe, which is kind of perfect, really. Maybe after I'm done re-reading the Bechdel canon I'll re-read To the Lighthouse...
Posted by Floor Pie at 1:02 AM