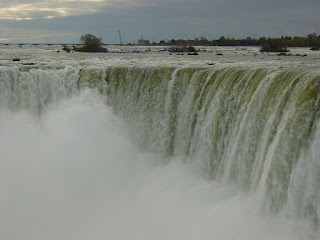 Let’s face it: I’m kind of a bitch. I don’t notice it most of the time, you know, since I’m me and can’t help but empathize with myself, well-versed in all the little nuances and justifications. But there have been times when that bitchiness was so over-the-top that I cringed in embarrassment even as it was happening, stuffing it away in the brain’s shame closet forever after.

Which is why I’ve never told you the Niagara Falls story. But now, I think it’s time.

First of all, in my defense, I was 23. In geek-girl years, that’s like 12 or 13. I was more or less happily single, in my final year of grad school, sharing a wacky apartment with a good friend in a sleepy university town in New York.

This was in the early 1990’s, long before the dawn of Facebook. If you wanted to get in touch with old friends, you had to call them. Or write them a letter. Or actually visit them, which involved unfolding actual paper maps and driving for hours while listening to your cassette mix tapes.

It wasn’t unusual to have platonic male friends from past lives sleeping on our living room floor on any given weekend. And, from time to time, it wasn’t terribly surprising if said platonic male friend ended up sleeping, well, not on our living room floor. Very rarely, if the planets aligned just right, that friend might make a few more visits. Next thing you know, you’ve got yourself a boyfriend. You didn’t plan it. You didn’t even particularly want it. But having romantic companionship is so much nicer than not. Why not give it a try?

I wasn’t unattracted to him. Ages ago, when we’d first met, I’d actually had a flaming crush of doom on the guy. It broke my silly teenage heart when he wanted to be “just friends.” So why, having finally won him over, did I cringe when he put his arm around me walking down the street? Why did the charisma and endless stream of jokes that once impressed me now mostly just exhaust and annoy?

I tried to outsmart my own resistance. There were good things here. He was creative and funny and cute. We’d do stuff like walk to the public library in the snow and check out armloads of children’s books. We even tried on funny hats together, romantic comedy montage style. There was so much to like. If I could just get past my not-completely-attracted-to-him problem, we’d be perfect together.

A sensible person would have cut their losses and set the guy free. Instead, I decided we needed to go on a road trip together. To Niagara Falls. The same weekend that weather forecasts were predicting the blizzard of the century.

Obviously, it was an idiotic plan from start to finish. Let me try to make sense of it: Ignoring the forecast of snow? We’d had a few “false alarm” weather reports that winter calling for pounds of snow that never actually fell. And it was March now, almost spring for Zod’s sake. I was certain – absolutely certain – that it wasn’t going to snow that weekend. As for the road trip itself? I don’t know. I just loved “the road” so much in those days. I guess I’d hoped the exhilaration I felt for road trips would somehow spill over into my feelings for him. Besides, I’d never been to Niagara Falls.

That first night we zoomed across the state of New York under a clear night sky, laughing and telling each other stories. It was working. I was happy and excited and truly enjoying his company. We were positively giddy when we finally rolled into town, driving down the deserted streets, looking for a hotel.

But the next day, things took a rapid turn for the worse. Still no snow, but the blizzard was imminent. At least that’s what everyone was saying at the hotel. Somehow, I stubbornly believed that snow was just an idle threat. He wanted to head back home before the blizzard hit. I wanted to at least see the waterfalls first. So we drove out to Goat Island and strolled into the bitterly cold morning.

Years later, I would tell this story to an incredulous, sputtering Mr. Black. It wasn’t the fact that I’d dragged some poor boyfriend to Niagara Falls on the eve of the Storm of the Century that bothered him. It was the fact that we’d made it all the way to Goat Island and somehow – don’t ask me how – never actually saw the waterfalls.

We looked. Really, we did. At one point, we thought maybe we saw waterfalls off in the distance, but we were mistaken. All we could see was a nice little picnic park, the churning river, and an ice-white sky getting ready to dump ten tons of snow on us. We must have been looking on the totally wrong side of the island. Maybe if we hadn’t been so busy worrying and bickering over what to do, we might have tracked the damn waterfalls down.

Instead, we decided to drive home in the hopes of beating the snow. There were just a few stray snowflakes falling. I’d driven in worse. But it got heavier quickly. I’d never seen snow fall so fast, in fact. It was relentless. About an hour into the drive, it was blowing all across the road, barely a scrap of pavement in sight. Stubborn as hell, I pulled into a rest stop imagining we’d wait for the snow to stop and then drive home. But after many cups of coffee and futile staring out the window, the boyfriend convinced me to book a room at a nearby Days Inn – a short but incredibly harrowing drive.

Looking back on it now, with my recently-acquired fretful mother sensibilities, it feels even more harrowing. What if there hadn’t been a hotel nearby? What if we’d had an accident? What if I’d died in Middle of Freaking Nowhere, NY with a soon-to-be ex-boyfriend just because I’d been so driven, so stubbornly determined to escape boredom and restlessness at all costs? Stupid, stupid girl.

That Days Inn would be our home for the next two days as the Storm of the Century raged on. I tried to get some schoolwork done in between bouts of staring dejectedly at the Weather Channel. Eventually I gave up and switched to cartoons, a Mary Tyler Moore marathon, and getting my butt repeatedly kicked at Scrabble by the boyfriend. Any lingering delusions of happy couplehood had pretty much faded for both of us, but we nursed it along anyway. The sheer boredom of being stuck in that beige bedroom miles from anywhere was a bitter little aphrodisiac.

Bitter irony, really. With the right person, getting stuck in a hotel room for days on end could have been a fantasy-come-true. Instead, I found myself yearning for the drudgery of singlehood apartment life. I wished I was watching stupid TV with my roommate, or stomping through the snow to one of our town’s many eccentric old diners for coffee and a grilled corn muffin. Even when my roommate told me over the phone about her ordeal trying to borrow a snow shovel from the cranky neighbors, I yearned for home.

On day three, the sun returned and the New York State Thruway opened again. We drove home in relative silence. I don’t remember when or how the official breakup happened, or if we ever officially acknowledged it at all. All I remember is an awkward brunch in one of my favorite diners, slogging through the slush to my Shakespeare seminar, and never seeing the guy again.

I didn’t feel much guilt at the time…just glad to be out from under the weight of his disappointment and the aftermath of my own terrible, terrible decision-making. But I did take notice. I spent a lot of my dating career being the one to get hurt. But I did my share of hurting, too. I’m not sure which is worse. When your heart is broken, all you have to do is heal. But when you’ve hurt someone else – with selfishness and stubborn, misguided determination to turn winter into summer through sheer will – well, the path is a little less clear.

I never did make it back to Niagara Falls. Living in Seattle now, it seems pretty unlikely that I ever will. I still can’t believe we were right there and never saw it. Traveled all that way and then just left without getting what we came for, only to get stuck in the snow and face up to an uncomfortable truth: Sometimes it’s just better to be home alone. I guess there’s a metaphor in there somewhere.
Posted by Floor Pie at 5:15 PM