Beyond the Broom Closet 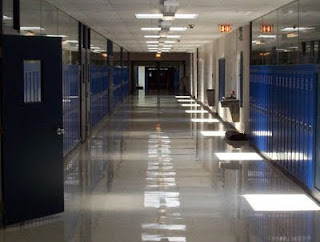 “It was basically a glorified broom closet,” the speaker says, recounting her own experience as a child in a special education classroom. She describes sitting in that room day after day with the other children who didn’t fit the mold, sometimes completely unsupervised. There wasn’t much learning going on. They were there to be kept out of the way. She’s not sure, even now, why she was assigned to special ed in the first place. Perhaps some quirks of temperament mistaken for a disorder? Perhaps the fact that she was a late reader?

It’s heartbreaking, of course. Maybe a little less so in the context of this multi-speaker presentation, which is a self-congratulatory parade of our city school district’s accomplishments in special education. We’ve come a long way, baby, from those broom closets. Special ed students are in general ed classrooms at their neighborhood schools now! And the teachers (who are totally happy to have this new challenge and never say hurtful insensitive things to the kids’ parents or mistake their disabilities for discipline problems, right?) are coming up with innovative ways to nurture and teach them! We even have instructional coaches to help schools get the inclusion thing right! Except…well, we just lost funding for that last one.

Somewhere beyond the broom closets and the mess we’re in now, I know The Boy’s going to be okay. Although I doubt he’d be okay under our district’s new “Send ’Em All To General Ed and Let the Teachers Figure It Out” plan (or ICS – Integrated Comprehensive Services, as it’s officially called). No, even at our Very Special Alternative School with a truly amazing resource room teacher, it’s been a tough year. Wonderful as she is, that resource room teacher is spread incredibly thin. And the rest of the school’s teachers and staff? Variable at best. Kindergarten was great. First grade? Well…

Let’s face it: Aspergers isn’t easy. It doesn’t look like a disability. Sometimes, frankly, it just looks like a smart little boy being a tremendous asshole. Sometimes it looks like any other Lego-loving kid. He can almost blend right in.

Until there’s a fire drill. Or an unexpected break in routine. Or anything that involves handwriting or drawing within the lines. Or classmates who have figured out how to tease and provoke him without getting in the least bit of trouble themselves. Or a principal who writes off that teasing as “normal” behavior and tells me this boy – who is trying so hard just to show up every day and be at school like the other kids – just needs to learn to deal with it.

At first, I didn’t want to change schools. This is his school, I thought. You guys step up. We’re here, we’re on the autism spectrum, get used to it! Which, I guess, isn’t much different from what the school district is trying to do. Cram these kids down an ill-equipped school’s throat because, in theory, the schools should be able to handle it.

Then I learned that some other schools in our district offer a middle ground between the broom closet and ICS. They have autism inclusion programs. The kids are still in general ed, but there’s more adult support. There are more services and pull-outs. Unlike our current school, where he’s expected to blend in and see the resource room teacher twice a week, these kids are an intentional part of the community. The teachers, the principals, the other kids and their parents – while still variable, I’m sure – know what Aspergers looks like. And he wouldn’t be the only one.

I broached the topic with The Boy. How would he feel about moving to a new school next year? One where there are other kids with Aspergers, too? And The Boy – who typically freaks out at the slightest change in routine, who’d wanted nothing to do with that “highly gifted” school he also tested into – got a very hopeful, thoughtful look on his face, and said he would like that a lot.

By the time I learned of these programs’ existence, there were only a few days left in the enrollment period to make the change for next year. With help from the resource room teacher and an old preschool friend who teaches at one of these schools, we raced through the obstacle course of red tape at break-neck speed to get his paperwork to One School Board Plaza by the deadline. And now…I’m on week 5 of the 7-week wait to find out which school he’ll be reassigned to. I’m feeling exhilarated and cautiously hopeful.

Too bad the school district wants to phase out these autism inclusion programs. They’re just too broom closety, I guess. Or too expensive, maybe. I really don’t know why.

But I do know the district’s gotten a big pushback from autism parents around the city, and there’s some indication that they’re starting to at least think about listening. Although there wasn’t a whole lot of listening going on at that presentation, touting ICS’s success at a handful of schools where it’s actually working. At least the director of special ed acknowledged, with an apologetic look on her face as she encouraged us parents to keep faith in the program, “We know it’s not perfect.”

Driving home, it’s the broom closet story that sticks with me. The speaker had marveled in outraged disbelief that self-contained special ed classrooms still exist, as if we were talking about dunce caps or something.

But it’s not the self-contained part that makes it a broom closet. Those rooms have dedicated special ed teachers who see the good in these kids and help them overcome their unique challenges without the distraction of a crowded, chaotic classroom. I don’t buy the “All Education is Special” line any more than I would buy “All Doctors are Surgeons” from my health insurance company. (Not to give them any ideas!)

Throwing my boy into a general ed classroom to see how he fared was worth trying. There were definitely a lot of positives, and I’m glad to have had the opportunity. But we’ve learned that without an experienced teacher who sets the tone for acceptance, without extra support from adults who get him – it doesn’t work. Aspergers is, absolutely, a special need. We’re not ashamed of it. It simply is.

A separate program doesn’t have to be stigmatizing. In fact, I see it as empowering. We’re not slinking off in shame. We’re taking our business elsewhere. I refuse to have our metaphorical wheelchair forced up a flight of stairs when we know there’s a ramp somewhere.

Good Luck! I have two boys at one of those very special alt schools with an Autism inclusion program. Number One Son is on the spectrum with an IEP but not part of the program. Number Two Son is typically developing. Both have had great experiences with kids from the autism program.

I love, love, love, love, LOVE thus post and am going to link it to a post in my blog. I'm a preschool teacher trying my best to cope with an 'inclusion-based' system in Australia. Sounds a lot like yours. Yeah, right, let's pretend they don't need a ramp...

LOVE my spectrum kids, but they are struggling in a situation where they are thrown into a situation they can't deal with without help one-to-one. I spend a lot of time taking them outside when they're about to blow and fielding the disapproving looks from my colleagues, who try their best but are NOT special-needs-trained.

I am so following you.

Okay, I linked your post into this one of mine- I thought maybe you'd like to use my comments in this as fuel for your fire in the battle to help your boy:

Looking forward to reading more of your blog.

Wonderful post. I work as the art teacher/atelierista in a school that uses an inclusion model. Having caring and professional support makes inclusion a rewarding experience not only for the child/children, but for everyone. It might be challenging some days, but it's an incredibly rich experience.