Fling One and Fling Two 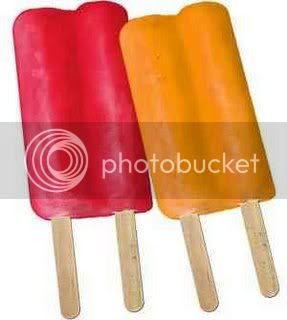 Following is a comparative study of the healing and destructive natures of the Summer Fling. Grab some orange popsicles and lemonade and enjoy:

From ages 16-22, I was all about the serial monogamy. But after my first year of graduate school, my long-distance college boyfriend put our sad, limping little long-distance relationship out of its misery – mercifully, of course, but at the time I was devastated. It happened over the phone, seemingly apropos of nothing. No closure, no hugs, nothing.

I did what had to be done: Made sad-chick-music mix tapes. Went on a brief ersatz Thelma and Louise road trip with another heartbroken friend. Dyed my hair and went shopping. Standing in a dressing room, appraising a powder blue bra/panties combo, it suddenly occurred to me that someday – maybe even someday soon – there might be some future paramour who would see me in those undies. That thought had honestly not occurred to me before. I still loved the old boyfriend like Nancy loved Sid; the possibility of new freedom was only just dawning on me.

But this was a perfect time for it. Fed up with the Skinner-Box aesthetic of SUNY-Binghamton’s campus housing, my roommate and I had just moved into the apartment of our dreams across the river in the old part of town. It was on the first floor of a crumbling olive-and-mauve house, complete with faulty wiring and a lime green wood-paneled living room. We were Mary Tyler Moore and Rhoda for the 90’s! (You guessed it. I was Rhoda.)

My roommate was working for a local non-profit that summer, and I met my very first I-Have-My-Own-Apartment fling at one of their outrageous house parties. He was a grad student too, visiting his parents from UC Santa Cruz, standing out in a room full of SUNY kids with his California tan and tangled golden hair. Not usually my type, but he also had a pair John Lennon glasses and a wicked flair for irony, so he was in. He was there with a group of Gen-Xish boys of the most delightfully geeky variety. While my roommate hooked up with a very tall cowboy-hatted gentleman, his group and I bantered.

One thing led to another. Fling One and I found ourselves alone together in the backyard under the pretense of waiting our turn at the keg. I said something self-deprecating and he responded with genuine surprise. Told me he didn’t agree at all. Took a step closer, so I lost my footing and had to lean into a fence. “You’re perfect,” he said as he went in for the kiss.

I’m going to go ahead and believe that the young man was extraordinarily perceptive rather than go with the more obvious “what a cheesy line!” route. Because, hey, we all need to hear “you’re perfect” sometimes, don’t we?

Anyway, Fling One was only in town for a few weeks. We had some montage-worthy fun: visiting the Tioga County fair, seeing a Gilbert & Sullivan play, swimming at the base of a waterfall near Cornell’s campus. As the days went by, I got a vague but nagging sense that he might be cheating on someone with me. In retrospect, I’m almost certain of it. But at the time I filed it away in the “it’s just a fling” drawer. I had no expectation of ever seeing this dude again. Turns out I was right. Still, it was a happy few weeks that jet-propelled me out of Missing My Ex-Boyfriend Land and into the beginning of a long and mostly happy single life.

“I cried at the corners of the squares, and everywhere I go Eli’s coming.” – Laura Nyro

Five years went by. I’d been in Philadelphia for most of them. Summers were often a time of loneliness and transition as friends left the city to start law school or seek their fortunes in more exciting locales. That summer I’d just broken up with my bike courier boyfriend and left my non-profit job for my first-ever corporate job – which would eventually yield a vibrant social life, but that first summer was stark and alienating.

He was in my writing workshop: a divorced artist/bartender ten years my senior who looked like Larry Bird. He was extremely intelligent and arrogant . . . two of my favorite flavors. One night at the bar after class, I found myself sitting across the table from him. At the time, I thought I was flirting skillfully. Looking back on it now, though, it was probably more like Sally from “The Peanuts,” complete with little pink hearts flying around my head.

The warning signs were all there, but I filtered them out willfully. He droned on about his own insecurities and the general stupidity of others. He overshared about his most recent relationship with a woman he simply wasn’t attracted to, sparing no details about her red bra that had made him so sad because she didn’t have the physical appeal to make it work. I should have run screaming. Just thinking about it makes me want to run screaming right now.

But instead, we moved to a booth alone and kept talking. Right in the middle of the conversation he just planted this huge kiss on practically my whole face, boa constrictor style. We kissed walking down the street. We kissed on someone’s front steps. We kissed furiously in an alley, hips and hands everywhere. We finally made it back to my apartment and made plans to see each other again the very next night.

The fling started out all hot and promising, but faltered pretty quickly. Something was off. I didn’t quite trust him. And he didn’t quite find me much more appealing than the red-bra woman before me. That should have been the end of it right there.

Instead, we agreed to keep each other company as a sort of reprieve from the vast loneliness we were both feeling that summer. I think that plan worked a little better for him than it did for me. I felt so depleted on those mornings after, sleep-deprived and out-smarted, while he’d stretch out contentedly and drone on about how my attention made him feel so good and energized. Not me, mind you. My attention.

I used to joke with him that he was going to kill me, sucking my energy away like that. Some joke. I used to wonder how he could be so callous as to take from me like that, renew himself on my comfort and affection without the least bit of regard for its source. I used to hate him for leaving me hollowed out, waiting for that nurturing part of me to grow back so he could come and feed off it again, only to leave again.

The worst part was, I was 27 years old and I knew better. I suspected I was dealing with some sort of sociopathic narcissistic depressive who just couldn’t help himself; he had to exploit my vulnerabilities in order to suck up the attention he craved, barely aware that there was even a “me” to destroy. I talked about it with friends, wrote about it, rolled my eyes over it, WTF’d to myself again and again at my inability to kick this monster out of my bed. And yet, I couldn’t bring myself to kill the thing off. In spite of it all, somehow I still yearned for the guy. It dragged on for the rest of the summer, raising its irresistibly sinister head every time I was sure I’d seen the last of it. Oh, it was awful.

I’m not sure I remember how, but eventually the whole miserable situation dragged itself to a halt. Autumn came, I started socializing with my new co-workers, and things just gradually got better. That winter, I met Mr. Black at a friend’s party. Intelligent, attractive, and kind-hearted. Jackpot!

Fling Two kept lurking around, though. I’d catch him walking by my building, peering up into my windows and waving cockily if he spotted me. He hovered around me at the bar one night, even as I did my best to alienate him by conversing almost entirely in “South Park” quotes with the other guys. I almost made it out safely, but he called me over as I was leaving. “You’re so cute,” he said in my ear. I’m pretty sure I left a me-shaped hole in the wall as I fled. I’m pretty sure he considered that a victory nonetheless. But it didn’t matter. I was free.


(That’s right, this whole post was just an excuse to share the sweet Legoy goodness. Happy summer, everybody!)
Posted by Floor Pie at 11:47 AM

I've said this before, but you really are an outstanding writer.

Somehow I never get tired of hearing it! Thanks so much, Tom. I've been enjoying your blog too.