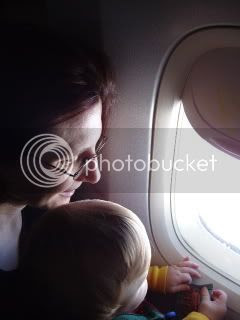 In a few short days I’ll be staggering my way through Sea-Tac Airport, loaded down with sticker books, crayons, snacks, a portable DVD player, three weeks’ worth of luggage, and two lively routine-disrupted children. If we’re lucky, the airport powers-that-be will let Mr. Black see us to the gate. Sometimes they do, sometimes they don’t. Either way, though, it’s a long trip ahead of us. Leaving early to get to the airport, a two-hour layover in Atlanta, and a two-hour drive back to my parents’ place after the last leg of our flight – that’s about twelve hours of travel just to end up in the house where I grew up.

I wrote about this after last year’s east coast trip, too:

It’s ironic that so many of our vacations take us to Berks County, PA, considering how much time I spent planning to get out… As a ten-year-old poring over my encyclopedias, looking up all the different states, trying to imagine where in the world I might live and what my state bird might be. As a teen with no date to the junior prom, wandering through a cornfield and picturing those miles of green were Manhattan city blocks. As a college student drudging my way through boring summer jobs at home, missing this or that boyfriend, dreaming of the beaded curtains and candles we might use to decorate some future apartment. Thinking up names for future cats.

But lately I’ve been thinking . . . it wasn’t just “escape” fueling my daydreams. Because I’m just as excited to make this trip back east, familiar though the destination may be. I like staggering through the airport with the kids, seeing all those planes and passengers coming and going all over the world. I like the sense of being in motion, waking up at dawn to pack the car while everyone else is getting ready for work. I like how travel somehow makes the familiar more exotic simply by skewing the context.

And I’ve loved airports ever since I was seven years old, when my family and I accompanied some visiting relatives to the Philadelphia airport to see them off. I’m sure it must have been a rather mundane experience for the adults, but for me the memory is charged with vivid excitement. Those rows of gray vinyl chairs! A huge airplane right outside just waiting to whisk my cousins across the country! Snack machines!

My wanderlust was less about escape than it was about the process of a journey – not being pinned down, sweeping blissfully across the grain of conformity. It’s no coincidence that I chose to settle in a town where that sense of journeying never really goes away. My Seattle. Even an ordinary errand is set with distant snow-capped mountains and vast expanses of water . . . deep, indigo water on all sides. I’ve lived here for ten years and I still catch my breath at the sight of it. It really feels as if we’re at the geographical edge of the nation, in flux somehow.

But even when I lived in less thrilling places, I found ways to sustain that sense of motion. Long walks to unfamiliar parts of town, discovering new shops and diners. Haunting the edges of popular thoroughfares, a tourist in my own city. Setting off on long drives or train rides to visit friends in other states. Even driving back home to my parents had a sense of adventure about it. I’d plan different routes, trying to keep it new.

Maybe the wanderlust explains all those long distance relationships in my twenties, too. Maybe I was addicted to the thrill of traveling to someone; those exhilarated hellos at airports and train stations. When you’ve only got a weekend or a week’s vacation to spend with the guy, suddenly even the most ordinary activities take on epic romantic significance. Every movie rental, every trip to the grocery store is heavy with meaning.

And so it is now with my family. It’s not always easy being so far away from them, especially since we were such a close-knit team for so long. But the closeness is still there, despite the miles. And when we see each other now, there’s an extra special quality to it. Just like those long distance relationships, there’s magic in a trip to Target; magic in our old community pool or lunch at Friendly’s. There’s magic on my sister’s front porch, in my parents’ living room, on the playground at our old elementary school. Every moment is treasured (and, more often than not, photographed).

That’s what it feels like for me, anyway. I can’t tell yet if my kids have a sense of the magic, or if this is all very ordinary for them. We’ve been doing the east coast trip twice a year, sometimes more, since The Boy was six months old. But I know they always have lots of fun, especially with their cousins. The Boy’s been talking about our upcoming trip for weeks.