Birthday and The Bridge 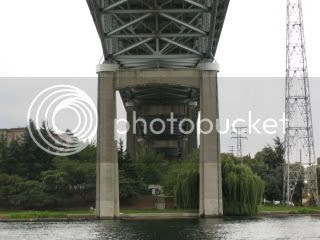 Sometimes my birthday has a tendency to attract bad news. Last year, for example, when Sarah Palin officially took the national stage and cast a shadow of worried speculation over my pizza party. A few years before that it was Hurricane Katrina.

And years ago, back in the Philly non-profit days, my co-workers and I were gathered around the break room table, ready to dig into my cake. Until we noticed that Ingrid wasn’t there. She still hadn’t come back from her vacation. After a confused huddle and an excruciating conversation with our Jim-Ignatowski-meets-Grandpa-Simpson office manager, it became clear that she’d quit unexpectedly the week before without telling her boss and just, well, left town.

I’d had a sometimes-intense and always-confusing friendship with Ingrid, although she’d wanted very little to do with me during those last few weeks. Her disappearance took the breath right out of me. I wondered and worried for months. Where did she go? And why? (And I’ve written about this in greater detail before. Maybe I’ll re-post the story on my archives page one of these days.)

But the “bad news birthday” that stays with me the most happened about eight years ago. Mr. Black and I were planning our fall wedding that year, so my birthday was practically an afterthought as I tallied RSVPs and designed the programs. The day before my birthday was a slow day in cubicle-land. We weren’t allowed to use the Internet for anything besides gleaning talking points on the various products our stores sold. But I’d take a peek at the local paper’s Web site once in a while. No one seemed to mind.

That day, though, my casual peek at the news froze me in my tracks. The section of I-5 closest to my house was closed. A woman had stopped her car on the Ship Canal Bridge – which is tall, people. Tall enough for a ship to sail under it. She was just sitting there on the railing, her legs dangling over edge. Ready to jump. 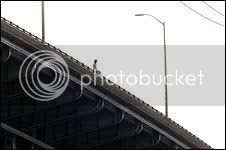 From the Seattle P-I

If I didn’t consciously remember Ingrid, the feelings were still exactly the same. I must have gasped, because Suze in the next cubicle asked me what was wrong. All morning, we both followed the story online as little bits of information were added. Apparently she’d been on her way home from her boyfriend’s place at around 6:00 a.m. I don’t remember if I read or just surmised that he’d ended the relationship the night before. But one of the police officers was talking with her. She seemed responsive. Maybe she’d come out of this safely.

The police officers decided to close both lanes of bridge traffic because all those supposed latte-sipping bleeding hearts of Seattle were leaning out their car windows and yelling at the woman to jump! Cursing at her. Telling her to get it over with. I’d known for years that Pacific Northwest “niceness” was a myth, but I had no idea things could get so ugly just because of a little traffic.

And then. She jumped.

I told Suze the minute I read the headline. We were both trying not to cry. Then I read a little further. The woman survived! She was in critical condition, but alive.

We went back to our jobs with resignation, writing and designing our little “how to sell the new lawnmowers” articles for the stores. But I kept thinking about that woman on the bridge, the woman I didn’t know but somehow completely knew.

Most of us aren’t suicidal, thankfully, but I think most of us can remember a time when we felt the cosmic rug so thoroughly ripped out from under us that the thought might have crossed our minds – if not actual suicide, then maybe just disappearing like Iris did. I could imagine so vividly her drive home from the boyfriend’s house, rejected. I’ve made that drive. I never pulled over on a bridge, but I remember pulling over at some interstate rest stop and sobbing my guts out for a frighteningly long time. Getting back in the driver’s seat seemed about as likely as sprouting wings and flying away.

Because I had the privilege of not being clinically depressed, eventually I was able to get out of my car, buy a Twix bar from the vending machine, and get on with my life. That woman on the bridge wasn’t so fortunate. Here’s the deal, people: Suicidal depression is not a choice. It’s a physiological condition. Getting mad at someone for being suicidal is about as useful as getting mad at someone for having cancer.

All that day, I kept remembering the drivers who’d taunted that woman on the bridge, cursing at her and urging her to jump. The more I thought about it, the angrier I got. If only I’d taken I-5 to work that day instead of Aurora, I might have been there. And I would’ve given them a piece of my mind, boy howdy. I spent most of my drive home imagining what I would have said.

The next day was my birthday. Mr. Black took me out for a fabulous dinner and margaritas at one my favorite restaurants. We even got a table on the patio to enjoy the summer night. It should have been lovely.

But the family at the table next to us kept talking about the woman on the bridge – not with the pathos with which Suze and I had followed the story, but with the gossip-swilling enthusiasm that compels people gobble up tabloids. It was a young couple and a fancy older woman who was probably one of their moms. I’m going to go ahead and assume she was visiting from North Jersey, not because I’m one of those anti-Jersey Seattleites, but because I’ve lived in North Jersey myself and I recognized the edge.

Anyway. Fancy Jersey Lady was pissed. She ranted at length with great self-righteous indignation, crabbing that the woman tied up traffic for three hours. She should have just jumped and gotten it over with! People were late for work!

I was trying not to hear it. But I kept thinking about those drivers the day before, telling her to jump and feeling perfectly justified in doing so. As if they’re any better than she is. As if their needs are the ones that really matter, and being late to their lame little corporate hamster-wheel jobs renders them thoroughly incapable of empathy even when there’s a human being suffering right in their path. How could they possibly compare their privileged little traffic frustrations to the pain she must have been feeling?

So there I was, face to face with the very callousness I’d been mentally screaming at all day. At my damn birthday dinner, no less. I had to act. My inner Lisa Simpson wouldn’t have it any other way.

We’d paid the check and were standing up to leave. “Just a minute,” I said to my poor unsuspecting fiancé. And I sidled up to Fancy Jersey Lady.

“Excuse me,” I said. She smiled patronizingly and I almost lost my nerve.

“I overheard what you were saying about the woman on the bridge and it really hurt my feelings.” Apparently I’d regressed to grade-school speak. She looked patiently amused, ready to tolerate the crazy person. The young man at the table was barely repressing a sneering grin. So I upped the ante.

“I knew that woman,” I lied. “I went to school with her!” Ah, there was the shock and remorse I was looking for. Watching that lady’s face change was almost worth seeing the horrified embarrassment flash across Mr. Black’s face at the same time. Thus encouraged, I went on. “It doesn't matter that people were late. A traffic jam is never more important than a human life,” I snarled at her. “Never.”

“I’m sorry,” she said, eyes wide with genuine repentance. I said goodnight and was on my way, mortified fiancé in tow. I heard the young man snicker as we left. Screw him.

I was a little embarrassed and sorry I’d lied. But on the other hand, someone went to school with the woman on the bridge. She was someone’s daughter, someone’s lover, someone’s best friend. So I decided to consider my lie more of a speaking-out on their behalf. If nothing else, it was a reminder that we are connected to the other people in our world and we are accountable for the harm we put out there. All that anger, all that resentment toward those who do not conform . . . it’s not doing anybody any good. So, even though I felt a little foolish at the time, I was glad I took my little mini-stand. Because if we keep acting like this stuff is okay, well, sooner or later it becomes okay.

Every birthday since then, I think of that woman on the bridge and wonder how it all turned out for her. I remember reading a blurb in the news that she’d gone home from the hospital several months later, so at least her body had healed. I can only hope the rest of her healed, too.
Posted by Floor Pie at 4:38 PM

Beautiful. Thanks for sharing this story.

I was actually stuck in the traffic that day. I'm glad I didn't hear the people yelling at her. I'd like to think it was just a couple of jerks, but something tells me it wasn't.

I'm glad you talked to that women. I hope she still remembers it.

Good for you for confronting the woman. Thank you for recognizing that lives are more important that traffic. I wish more people did.

I hope you had a great birthday this year!