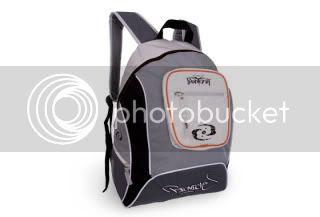 I’ve been making The Boy’s lunches every day of his life (or at least since he learned how to chew), but for some reason it felt like an insurmountable task this morning. The added step of packing his sandwich into that shiny new Clone Wars lunch box was just too much for me. I needed to take a few deep breaths before I could get started.

“I’m really nervous,” I admitted to Mr. Black, who was stoically scrambling some eggs.

“Don’t be nervous. You don’t really have to do anything,” he said in his nonchalantly reassuring manner. Then he smirked and added “It’s just a test of everything you’ve done so far.”

Love that sarcasm. In a sad way, though, he was spot-on. This past week leading up to The Boy’s first day of kindergarten, I’ve been walking around with the same mix of vague optimism and sheer dread that I’ve felt before every new job I’ve ever started. Is my work going to be good enough? Only in this case, my “work” is a zany little five-year-old boy whom I love ferociously and have done my damnedest to prepare for this day.

I’ve been battling kindergarten doubts since last year, but I decided to forge ahead. Depending on who you talk to, there’s either something Very Wrong with my son or I’m a Very Fretful Mother and he’s Fine. I suppose the truth lies somewhere in between. Some days I don’t even know what to believe myself. We have a diagnosis of “anxiety and depression” from a therapist who, it turns out, has a reputation for over-diagnosing. But as long as no one’s trying to shove medication down the kid’s throat, I appreciate having a diagnosis in my pocket. It can be a useful tool; good shorthand to explain his quirkier behavior.

The day before school started, I scheduled a meeting with both kindergarten teachers (the kids aren’t assigned teachers until they’ve had a chance to get to know them all and get a sense of group dynamics). Both women were very kind, smart, and reassuring, but it seemed pretty clear that they’re coming out on the side of “Very Fretful Mother.” Oh well. We had a productive meeting anyway, and it’s always a plus to find out that your little Good Will Hunting’s behavior and anxieties are considered relatively typical by his future teachers. (For now.)

So, today was the big day. It’s a short drive to the Very Special public alternative school we were lucky enough to get into (thanks to Seattle’s “school choice” lottery). Little Girl insisted on listening to her new favorite song the whole way – Laura Nyro’s “Eli’s Coming,” which set a strange mood to say the least.

“So I have to do this two more days and then I get a break?” The Boy asked from the back seat. Great. Already he’s workin’ for the weekend, I thought. But mostly I was trying to remember my favorite route through the school’s neighborhood to find super-awesome street parking. I’d had such good luck with it in the past when I’d been in the neighborhood on other business. I turned up the hill, hoping for the best.

Big mistake. It was like that scene in Thelma and Louise when the cops finally catch up with them. Charging right toward us down the narrow street, illuminated from behind by a blast of blinding sunshine, was a convoy of school busses and a very confused looking minivan trying to get around them. The street I’d planned to turn down was blocked with more confused minivans. There were cars behind me and a woman getting into a wheelchair from the street side of her car. Fortunately this bumper-cars situation resolved itself with unexpected grace, but clearly I have a lot to learn about drop-off parking.

The schoolyard was just as chaotic. Kids swarming in every direction, parents trying to figure out where to go, teachers trying to hand out name tags. Little Girl refused to get out of her stroller, scowl firmly in place and occasionally howling “I want to go hoooooooome!” The Boy vacillated between huddling by my side and tearing around the playground, bellowing to no one in particular.

He was a few feet away from me, chatting with a boy he’d met at one of the school’s summer playdates, when they started moving the kindergarteners into the building. The crowd changed from a wild mob to an efficiently moving line so fast, sweeping The Boy right along with it. I caught up with him and tried to give him a kiss. He squawked and ducked, and a few of his classmates moved between him and Little Girl’s stroller. Not wanting to mow down the little ones on their first day of school, I stayed behind and watched the group fold itself into the building. Some parents went inside, too. They were gathered around the classroom windows in the hallways, watching the kids singing songs.

“I want to go hoooooome!” Little Girl wailed again. I made that my pretense for leaving. But the truth is, I didn’t really want to stay any longer. It was out of my hands. In a daze, I pushed her stroller across the schoolyard and down the street. A whole day with just me and a two-year-old. I haven’t had that since . . . well, since right before Little Girl was born. It was so nice, but a little strange for both of us. Kind of like that Seinfeld episode when Elaine and George try to hang out without Jerry. It will take some getting used to.

As far as I can tell, The Boy’s first day went as well as could be expected. He’s extremely put out by the fact that he’s expected to make new friends (“I already have friends!” he said, tearing up a little). He doesn’t care for the chaos of recess and lunchtime. But he’s proud to be learning some new things and is excited about the classroom’s cool blocks. Tonight he told Mr. Black “They taught us how to walk single file. But they call it a ‘line’.”

And that’s about all we could get out of him. He spent most of his after-school hours talking excitedly about Bionicles and bouncing off the walls, calling himself “The Amazing Great-O.” Everyone told us how exhausted kids are after their first day of school, but I thought we’d never get this guy to bed tonight.