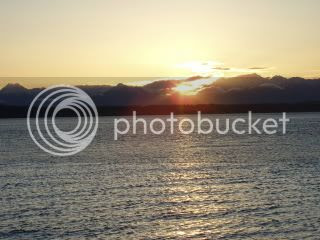 Mostly I had my eyes on my feet, watching them slosh across a bed of dark brown sand under the icy water, my coral-painted toenails flashing among the bits of seaweed. Even in August Puget Sound is too damn cold, but an evening slog through the freezy-cold surf was just what I needed at the moment. Between the seaweed, salt water, and the pumicing effect of rough sand on my feet, it was like a spa visit – but with a silvery sun getting ready to set over the waves in the distance. Not too shabby.

A young couple further up the beach caught my eye. There are lots of couples at Golden Gardens at sunset, of course, but this one stood out. No cuddling or sunset gazing for them. They were busy at work placing stones in the shape of a huge heart with their initials in the middle. I couldn’t guess how young they were. Old enough to have mastered irony; young enough to believe they might be the only ones who had.

It was obvious that they were madly and probably recently in love, but I can’t quite put my finger on what gave them away. Surely there weren’t actual hearts and singing birds flying around their heads, but there may as well have been. Their smiles were wide. Somehow they managed to keep their eyes on each other almost constantly, even as they gathered and placed the stones.

The woman was tall and pale with hip glasses and dyed red hair, fluttery in a sort of Renaissance-Fair-meets-Gidget outfit. The guy was truly remarkable, just outstandingly, gorgeously dork-tastic. Pasty white skin flabbed out over his red bathing suit, which was pulled up past his belly button. He wore his wild, curly brown hair in a long pony tail. And glasses, of course.

And I have to say . . . this is about the most perfect couple I’ve ever seen. Poster children for love itself. The beauty of it all: those two very ordinary souls simply transcending their superficial imperfections in a moment of earnest mutual bliss. Romeo and Juliet, nothing. These two are the new icons of young love in my mind. Every chick flick should be about them.

They were joking about their project, laughing as it became clear that the tide was starting to nip away at it. “Don’t judge it, it’s a work in progress!” the guy called to me merrily.

“Have you ever been in love?” the woman asked me.

Have I? It’s kind of what I do, I wanted to say. It was my major in college, the subject of my Masters thesis, a turbulent 20+ year career. I simply nodded.

“Then maybe you can give us your opinion!” she smiled. I appraised the stone heart and initials for a polite moment, expressed my approval, and moved on, still soaking up the glow of their happiness.

After an eleven-year relationship, two kids, countless homeowner mishaps and money woes, the kind of bliss that inspires heart-shaped rocks in the sand tends to elude you. (Case in point: as I’m writing this Mr. Black is in the kitchen attempting to put away the groceries and cursing a blue streak because my overstocked OTC pharmaceutical supply keeps falling on his head, one box at a time. But I digress . . . )

So, yeah. We haven’t made too many heart-shaped anythings lately. But here’s the cool part: The heart-shaped love is still there, and we both know it. There was a time when we grinned endlessly in each other’s presence and spent every possible minute of free time together. There was a time when we felt incredibly lucky and amazed just to wake up together. Our day-to-day mayhem of family life is built on that initial infatuation. That’s what makes it possible to do any of this without intentionally maiming each other on a daily basis.

That night on the beach, I walked back and forth until my toes were numb with the cold. Each time I passed the stone heart, the tide had encroached a little further, lapping at its edges. And then, on my last pass, an extended family of at least three generations was joyfully descending upon the stone heart, delighted at their find. They were gathering rock samples and talking excitedly amongst themselves. You could still kind of make out the letters.

Surely there’s a metaphor in there just yearning to be extended, but I’ll leave it there for tonight.

“All my good wishes go with you tonight,
I've been in love like you.”
– Rodgers & Hammerstein
Posted by Floor Pie at 11:25 PM

Let me try this again, without typos this time:

Your writing makes me happy.

I had to stop by when I saw you are also from Seattle..my hometown.