Preschool Now is Over 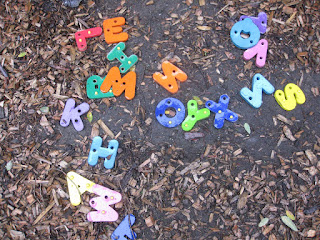 I knew this was coming. Since September, I’ve been watching the kindergarteners at The Boy’s school, imagining her in their place. Little Grrl is every bit as much of a handful as The Boy in completely different ways, but I’ve always felt that public school K would be a nice fit for her. She digs all that sitting-still/numbers-and-letters stuff. And while we’ve been very mindful of letting her enjoy the preschool years without cramming pedantics down her throat, The Boy has taken a rather Tiger Mom-ish approach to teaching his sister reading and math. (Which may explain why one of the first words she can read is “beer.” Good one, son.)

So, yes, I feel well prepared to happily move on to the next step. Both kids in elementary school, me pursuing a new career in special education. Freedom! A chance to put my natural talents to work outside the home! Sweet, sweet dual income household! This is all good stuff. I am ready!

Well…ready to move on. But ready to move away? Ready to leave the SAHM life behind? Ready to say goodbye to the co-op preschool I’ve attended alongside my children for the last seven years? Hmm. 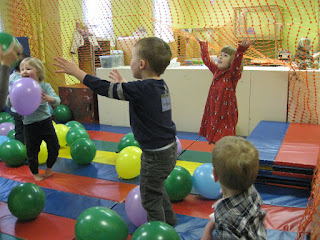 Co-op preschool, man. It’s not what you think. I never, in a million years, would have ever imagined my cheerfully misanthropic self even participating in a co-op preschool, let alone becoming so heavily involved to the point where it actually feels like a college graduation of sorts now that it’s ending. But here we are.

Seven years. That was longer than college (sometimes with twice the drama). And while I never lost my cynical edge; while I never morphed into whatever ill-informed notion of a stereotype I feared I’d become…I have lost a certain sense of irony about the whole thing. I care. I simply care.

We started in a Toddlers program on a community college campus, one morning a week. The Boy was 17 months old in a class of about twenty other one-year-olds. And it was magical. Absolutely dreamy. Many of us were first-time parents. This was the first time we’d ever seen our little guys all together in a “school” context. But there they were, toddling from station to station, painting at easels, playing music together, sitting side by side at a long table having snack. 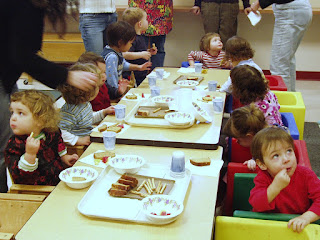 We parents were charmed. Well…when we weren’t freaking out over all the little parenting challenges that came our way. Maybe that’s what made it so easy to bond with each other. We’d meet for playdates at each other’s houses, outings in child-friendly coffeehouses and library story hours, the occasional parents’ night out.

There were classes for the parents, too. That’s where I first learned about concepts and methods that would become invaluable to me as The Boy blossomed into his full-blown Aspergian glory. Temperaments. Positive discipline. Emotional intelligence. How to manage conflicts and deal with disappointment. Not only were we learning these things, but we could put them into practice instantly in the classroom – not just with our own children, but with 20 or so, all with different strengths and challenges.

As the children got older, more and more parents moved them into full-time daycare or drop-off preschool. The Boy and I stayed. For one thing, the price was right. And as his challenges became more pronounced, it became clear that drop-off simply wasn’t going to work for us. (The two daycares I’d attempted with him didn’t work out at all. One actually kicked him out for crying too much. “This is a happy place,” they explained.)

But I also loved the parent education component and the sense of community. I loved that when The Boy went through his biting phase at age 2, the teacher addressed it with such respect and empathy, giving all the parents the tools to keep his classmates safe while not stigmatizing The Boy for the behavior. I loved how everyone brought casseroles and Christmas cookies to our home when Little Grrl was born. I loved watching The Boy make his first friends, and becoming friends with his friends’ moms. 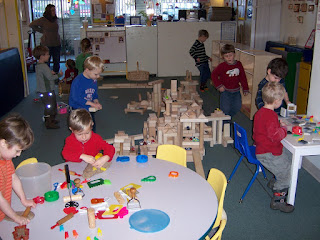 There were challenges too, of course. I expect we would have run into them at any preschool or daycare, what with The Boy’s as-yet-undiagnosed Aspergers coupled with the general wildness of ages 2-5. Getting yelled at by a cranky dad on the playground, being told “He should be kicked out of school!” was an all-time low. But after that happened, I drove straight to a classmate’s house to pick up Little Grrl from her playdate, where I had not one, but two shoulders to cry on in the kitchen while our kids played upstairs. It was tough slogging through the rest of that school year, but I had a great support system to help me do it.

And then, it was time for Little Grrl to start preschool. I was ready for a change of scenery. Lucky for us, there are over 40 co-op preschools to choose from all over North Seattle, operating under the umbrella of the community college’s parent education program. Admission is by lottery alone. We’d been lucky enough to get The Boy into a preschool close to our home. The only other one that was sort of nearby was wildly popular, headed up by Seattle’s own rock-star-meets-Mr.-Rogers, Teacher Tom. I’d hoped to send The Boy there, actually, but we ended up dead last on the wait list. I figured we had no chance, but I put Little Grrl’s name in the running anyway and hoped for the best.

Reader, we got in. At the time I was so relieved, so grateful for a fresh start at a new preschool. But it was so much more than that. How to even explain it?

I’m reluctant to sing Teacher Tom’s praises here…not because he doesn’t deserve it, but because he’s already got such an adoring chorus of loyal parents and blog readers that my voice feels superfluous and insignificant among them. Hollow. Besides, I don’t really see myself as a “fan.” I’ve held on to just enough of the old cheerful misanthropy to resolve that I simply don’t do “fan.”

Tom, though. There’s something about him that inspires that reaction in spite of my knowing-better self. Even that first time I toured his preschool, when The Boy wasn’t even two yet, I felt so captivated by it all. It was one of those rare brilliantly sunny Northwest winter days. The snow-capped Olympic mountain range was in full view, and sunlight poured through the classroom windows.

I’d been trying to conceive a second child at the time and was drinking dangerous volumes of fertility tea, so maybe that’s to blame for my reaction when I first saw the teacher himself…but I was absolutely struck by his presence. It was Beatlemania. Elvis. Freaking Kurt Cobain. It was downright embarrassing, is what it was. I worried that if we ended up going to school there I’d be too school-girlishly distracted to be of any use to anyone. But I fell asleep that night feeling absolutely euphoric, remembering the tree leaves painted on the ceiling and the tricycle on the wall. 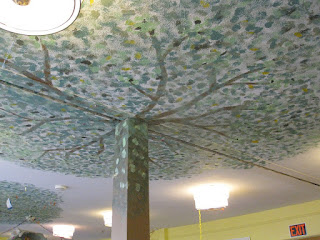 Meeting Tom in person a few years later was a lot more down-to-earth, thankfully. But there was still something instantly infectious about the guy. Even when you’re up to your elbows in tempera paint or picking dried glue out of your eyebrows…you’re smiling. You’re happy to be there.

Little Grrl had a fabulous time, of course. She made some good friends, enjoyed lots of wacky art and science projects, and will act in her very first play next week. But what a bizarre experience, doing co-op preschool over again with a school-friendly child. What a trip. On the one hand, it was a lot more relaxing this second time around. She never had a biting phase, or a pushing phase. The closest she ever came to pissing anyone off was during her never-getting-off-the-swing phase. (Still ongoing, I’m afraid.)

But it was uncomfortable, too. I felt like I’d somehow infiltrated enemy lines disguised as a “normal” parent of a “normal” kid. And, indeed, I did find out how the other half lives – the half that doesn’t much care for loud, anxiety-prone, Aspergersish boys like my son. The half that fears boys like mine; regards them and their parents with suspicion. The half that probably would have supported that dad who yelled at me years ago.

But they didn’t know about any of that. They only knew The Boy through my eyes, through my spin. Would they have still liked me and respected me if they’d known him first-hand at ages 1-5? I’d like to think so. But who knows.

I’m not the only one, though. There are other moms like me at this preschool and our old one who are Sherpa-ing their quirky-anxious children through the complicated world of school and friends. What I love the absolute best about co-op is how it’s allowed us all to come together and support each other with very little pretense. We can admit imperfection to each other. We can talk for hours in each other’s kitchens, vent, advise, encourage, laugh, bang our heads in frustration, have another cup of tea. I can’t even imagine where I’d be without these friendships, these conversations.

And now…it’s almost over. The friendships will last, I’m sure. But, just like college graduation, we’re moving on to a “real world” of sorts. Setting out on our own, going back to work, sending our kids off to more traditional schools where we only see our fellow parents at drop-off and pick-up time, if we see them at all.

But, like I said…I’m ready to move on. There are good things ahead. I will always remember these preschool years with love and fondness. I still can’t quite believe it’s almost over. But here we are.


What the hell, it’s a graduation of sorts, right?
Posted by Floor Pie at 2:00 AM

Floor Pie,
Enjoy the continuing adventures and ever changing communities you will be a part of as you journey through the elementary school years with your kids.
SummerIsBest
P.S. Heads-up. Homework will suck the life out of your evenings. Schools rarely stick to the "10 Minutes per grade level" rule of thumb.