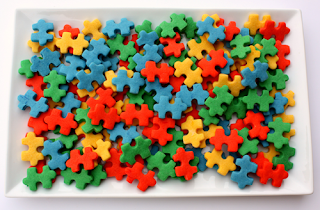 April is Autism Awareness Month and everybody’s got something to say, so I guess I’ll chime in too. This will be pretty simple, actually. I’m not going to ask you to “light it up blue,” or read up on the latest conspiracy theories about autism’s rise, or watch Temple Grandin (although that is a pretty fabulous movie). All I really need anybody to do – this month and every month, really – is to simply be aware of autism.

And, okay, something a little more complicated after all: Be aware of our own very deeply engrained ignorance, prejudice, and misconceptions about autism. Be aware that we may think we know…but we don’t. We don’t know much of anything.

Yes, “we.” I’m a proud Aspergers parent myself and half the time I barely have a freaking clue. I try to second-guess and get it wrong (way wrong). I just plain forget sometimes that The Boy doesn’t like surprises – even really good ones. I forget that no matter whose birthday it is, he will always, always blow out the candles before we’re done singing “Happy Birthday” because he can’t stand the intense auditory sensation of a roomful of mixed-key singing. Sometimes I acquiesce to strangers out of meaningless politeness instead of sticking up for him. Sometimes I lose patience with him even when I know better.

But I have to forgive myself and keep trying to do better. Aspergers parenting can be a counterintuitive endeavor. And if that weren’t challenging enough, most of us adults have a lifetime of misinformation and prejudice to overcome.

We grew up in a time when “retarded” was a perfectly acceptable pejorative. We went to school in mostly non-mainstreamed classrooms and, as far as we knew, there was no such thing as an Aspergers diagnosis. There was a boy in my small rural elementary school who, in retrospect, was clearly on the spectrum. He cried and hit and grabbed the scissors out of our hands. He’d melt down at the slightest provocation. We all came to regard him as the “bad” kid in our class. Even me. I was painfully shy and had my own issues going on, but it felt good to feel superior to someone.

In third grade, our teacher lost all patience with him and sent him to the principal’s office to be paddled. We could hear him wailing and screaming all the way down the hall and around the corner. It was awful. But somehow, we rationalized that he must have deserved it. An adult said so. 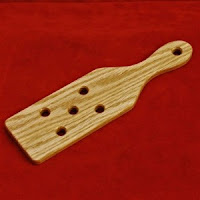 I was reliving that moment a lot when The Boy was younger. How awful it was to be on the other side of that situation, to watch his classmates sitting stoically, hurt and puzzled while The Boy pushed or grabbed or wailed his way through some perceived injustice or other. At least we live in a state where corporal punishment is prohibited in schools. But have we evolved much further than that?

Right now, right here in touchy-feely lefty-loosey Seattle, elementary school special ed students are getting detention, and even suspension, because their behavior is routinely mistaken for defiance. It’s happened to The Boy. It’s happened to a lot of special ed families I know, autism or otherwise. When our children aren't proactively well-supported, those dominos go down pretty fast. They may feel extremely threatened and panicked and shift into “fight or flight” mode. What does that look like? Tantrums. Hitting. Spitting. Saying rude or hurtful things. Biting. Running away.

We adults have a lot of baggage around those behaviors. We feel disrespected. We feel embarrassed. We feel our darkest insecurities being summoned by our inability to control the situation. Whatever deep-seated, subconscious childhood beliefs we may have about “bad” kids are unearthed. We feel like kids ourselves, being pushed around on the playground. We feel afraid. And sometimes, under the weight of all that baggage, we make exactly the wrong choice and only make things worse.

It’s a natural human impulse, I think, to want to make someone feel bad for making us feel bad. That’s basically what punishment is. It’s not so much about teaching positive behaviors; it’s about making someone feel the weight of the “bad” thing they’ve done and suffer like we suffered. And maybe there’s a time and a place for that version of discipline. But this isn’t it.

We need to recognize our baggage for what it is, and we need to challenge it. When The Boy blows out the candles on someone else’s cake because he can’t stand the “Happy Birthday” song, even I think he’s being an asshole. But that assumption is fundamentally wrong. I can teach him better coping skills for being in a noisy room. But I can’t attach a moral judgment to his lack of coping skills. And neither should anybody else.

I guess what I’m saying is: What if we just assumed that a child is behaving badly not because he’s a jerk who needs to be put in his place, but because he has real challenges and needs a different approach? If we must jump to conclusions, let’s try jumping to an empathetic one. Let’s remember that the dominant culture decides what “social” and “normal” should be, but that doesn’t make expected behaviors come any more naturally to children on the autism spectrum. They're working very hard just to show up and be in the room with everyone else.

And instead of assuming the parents don’t know or don’t care, consider the possibility that we do know and care; that the misbehavior breaks our hearts; that we do everything we can to help our kids learn to function within the parameters of “normal” but it doesn’t happen overnight; that we can barely take a step without weighing the implications. This tends to drain our energy for faking shock and remorse over our children’s every autistic move in public. But for Zod’s sake, it doesn’t mean we don’t care.

Be a little patient. Be a little forgiving. Remember that you don’t really know. Nobody does.

And that, for me, is what autism awareness looks like.

As a teacher with a couple of children on the spectrum in my class, every insight I can get is valuable. This is lovely writing and very helpful.

"Those in the know" considered for a while that my son might be on the spectrum. While it has been shelved for now, he is odd and wonderful and bright, he has his own learning and social issues, and I have to be aware that I often don't understand. Thanks for this essay.

Thank you, we have had children with a diagnosis of being on the "spectrum". Had children who receive a diagnosis while in the preschool. Each child as different as chalk and cheese, we need to allow for individual eccentricities. Your post was wonderful and I am passing it on to several of my families.