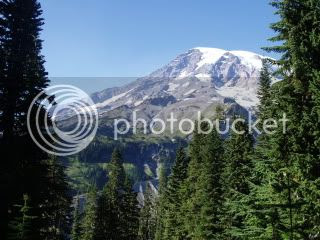 At my forty-first birthday dinner, over one too many delicious tequila-based cocktails, Mr. Black tells me he wants to climb Mount Rainier.

I wait for the smirk, or the air quotes, but neither are forthcoming. He’s serious. What can I say but “Why?”

“Well,” he chuckles a little self-consciously, “because it’s there.” And then it dawns on me.

“You’re having a mid-life crisis!”

He smiles and shrugs. “Yes, I guess that’s part of it.”

I panic a little. How can this be? He’s always so even-tempered and content; the Spock to my Joan-Cusack-in-Broadcast News. And now, after all these years, the male existential angst raises its head and he wants to do the hiking equivalent of buying a red Corvette?!

I take a long sip of my drink and blurt out “Couldn’t you just have an affair?”

“Do you want me to have an affair?”

Immediately we start trying to out-geek each other with amateur actuarial speculation on the likelihood of death due to an affair vs. climbing a mountain. You could get shot or stabbed by a jealous husband. You could have a car accident on the way to her place. You could contract a deadly STD. Ah, there’s that ironic detachment. The conversation moves on.

We agree that he’ll start by joining a local hiking group that helps midlife crisis guys prepare for their eventual feats of strength. None of this driving-to-a-trailhead-on-a-whim nonsense. And he acknowledges that he might decide not to climb the whole damn mountain in the end. But in the meantime it will be nice to kick his hiking up a few notches with some new challenges and maybe new friends. Nothing wrong with that.

But later that night, I can’t sleep. Suppose he really goes through with it?

Worst case scenarios flash through my mind. To calm myself, I lean against his sleeping back and just listen to him breathe for a while. He is here, I remind myself, not on a mountain, not lost to some rocky wilderness. I wrap one arm around him and bask in the simple presence of his body. And then I imagine that same body, just a body, striving and inconsequential against miles and miles of glacier and sky. I hold him tighter and try to just breathe.

I wasn’t always so fearful about the whole Man vs. Nature thing. I used to embrace it, in fact. Nature was – still is, in many ways – one of the deepest, most comforting, most spiritually fulfilling things in my life. I discovered hiking in graduate school, escaping with my friends to the Catskills whenever we could manage it. I loved the rush of pure strength in my legs as we pushed our way up those steep climbs, the air so clean it felt a little sharp going in. And I loved my boots like some people love their cars.

Even after I moved to Philadelphia I tried to keep the spirit alive, walking everywhere in any weather, setting off on hiking-related vacations – Colorado with a good friend, Maine with Mr. Black, the Adirondacks by myself one summer. Moving to the Pacific Northwest felt like a paradise of sorts, where we’re literally surrounded by snow-capped mountains and wild, rocky beaches; so many opportunities to lose oneself. Those early days were incredible, exploring the edge of the continent with the Man I Loved.

I imagined we’d be one of those many Northwest families who take their babies camping and hiking. We did manage to get some hiking in with The Boy in the early days, back when he was portable. 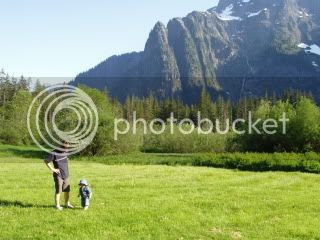 But now, with two rather anxiety-prone children ages six and three who have a hard time abandoning routine and creature comforts . . . well, let’s just say we’ve put the dream on hold.

We tried to do kid-friendly versions of our old trips, with moderate success. We’d stay in motels. We’d spend the rainy days exhausting limited indoor attractions – local cheese factory tours and museums featuring pioneer artifacts and taxidermy. But last year, on a relentlessly cloudy Oregon Coast vacation, I was going stir crazy. It was just a little cloudy – okay, it was a lot cloudy – but it wasn’t actually raining. Couldn’t we do something outdoorsy before heading home to the city?

It seems ridiculous in retrospect, but you have to appreciate the whirlwind fog of traveling with small children. She was two at the time, too heavy to carry and too, well, two to walk along. It was a small umbrella stroller, light and pretty easy to navigate. We did fine for most of the trail. I even made it over a narrow, bumpy wooden bridge with some maneuvering. But when we hit the beach, there was the usual barrier of rocks and driftwood to climb over and down. Why hadn’t I thought this through? 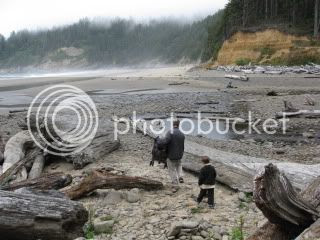 Mr. Black carried the empty stroller while I inched my way over the rocks and driftwood carrying my impossibly heavy two-year-old, willing away back pain and silently praying for a safe descent. How the hell am I going to make it back over those rocks, I wondered, when Mr. Black pointed to a staircase built into the hillside on the other side of the beach. Stairs! We’re saved! We sat back and enjoyed our cloudy beach day.

But when it was time to head back, those stairs proved only slightly less challenging than the pile of rocks and driftwood. Her little two-year-old body got heavier with each slow, deliberate step. My neck and shoulders ached, and I was growing crankier by the minute.

At the top of the staircase I unloaded Little Girl back into her stroller and started crabbing at Mr. Black about something. I don’t remember what. It was one of those conversations where one person’s being deliberately vague while the other is deliberately obtuse. You know: “What? That. What!? That! What?! THAT!!!” One of those. We were about ready to start pummeling each other with the nearest sand shovels.

Suddenly, I realized how close to the edge of a cliff we were standing. And how the brakes of Little Girl’s stroller were not on.

Calmly, steadily, I pushed the stroller away from the edge and up the trail, still pissed about whatever minutia we’d been arguing about. But horrifying images teased at the edges of my mind. What if I hadn’t noticed in time? What if The Boy had accidentally bumped into the stroller and sent it rolling? What if my sweet little girl, in her diaper and mismatched Gymboree outfit, my sweet little girl with her adorable laugh and love of books, my sweet little girl who hated the damn beach and would have been so much happier staying home with her stuffed animals, had met a terrifying and dramatic end all because of my own selfish attachment to stupid cloudy Pacific Northwest goddamn wilderness? Screw you, Nature.

Yes, this was an overreaction of sorts. It wasn’t Nature’s fault, after all. A little common sense could have prevented tragedy. And we did avoid tragedy, didn’t we? Looking back on it, I can’t even trust the memory. How close to the edge of the cliff were we, really? How real was the threat of her falling?

But nothing can match that horrifying vision of “what if,” or the realization that I’d brought my little daughter into harm’s way through my own poor judgment and misguided love of being in a thrilling but dangerous spot where we had no business in the first place.

Seriously, why do we need to stand at the edge of rocky beach cliffs and mountaintops? These places aren’t here for us. Why do we keep trying to have them? Is there not enough to satisfy our bodies and our spirits in the homes we’ve created, in the cities we’ve built? Maybe the kids have the right idea after all, missing the comforts of home while we drag them down the trail of pristine natural beauty (that we paved and drove our cars to get to) in an attempt to reclaim something that never belonged to us in the first place.

And yet, I do still love to hike and immerse myself in breathtaking mountain scenery. What’s not to love? There’s a certain peacefulness and strength out there that just isn’t at the mall, or even at a city park. It’s in the soft air, the quiet, the motion of branches and waves. It’s the feeling in your legs when they just have to stretch and climb, literally elevating yourself one big step after the other.

I’m less compelled to drag the kids along now, at least until they’re older. As for Mr. Black and his midlife climbing aspirations . . . Well, I won’t stop him. I can insist that he proceed with safety and extreme attention to detail, but I can’t hold him back. As midlife crises go, this seems like a pretty benign one. Might as well let it unfold.
Posted by Floor Pie at 6:41 PM