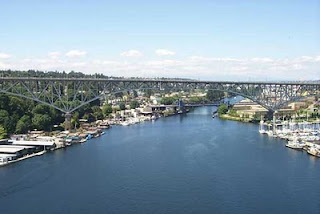 These bike-path dudes all look the same. Hip and healthy, shaved heads under their slick helmets. If I weren’t so distracted, I’d be feeling comparatively dowdy in my old jeans still spattered with glue from a day-camp art project. But that’s kind of irrelevant right now.

Everyone who passes by does the same thing I did – pause in disbelief, start to briskly and righteously move away, and then . . . look up again and freeze, helplessly. Bystanders. Some people take pictures with their phones. I already feel tacky for standing here and watching this, so I take some small consolation in the fact that at least I’m not that tacky.

She’s right in the center of the Aurora bridge, on the other side of the railing, just standing there, facing the long drop to the water and police boats below. I can see a few police officers on the bridge with her. It looks like they’re talking. She gestures wildly at them from time to time.

Then she turns around, squats down and lowers one foot, as if she’s climbing down a ladder. But there’s nowhere for that foot to go. It just waves there, impossibly small against the vast expanse of bridge and air. One of the bike guys near me bellows “GO BACK UP!”

And she does. Not all the way, but she lifts her foot back up and steadies herself on the ledge again. Now she’s squatting, with her face in the railing and her back turned to the jump.

An Argosy sightseeing ship passes by, awkwardly, skirting as far away from the scene as possible.

I know I shouldn’t stay. I have no business here. None of us do. But I want to see her climb back over that railing to safety. I feel responsible for seeing this situation resolved, somehow. You can’t just walk past a suicide attempt and never give it a second thought, can you? After watching her lift that foot back up, I’m almost certain she won’t go through with the jump. But I want to know for sure.

I’m feeling rather stoic – until I actually talk to someone and feel my voice shaking and repeating my words. I can’t yell like the bike guy did. But I’m talking, actually saying the words out loud, in the same kind-but-firm tone I use when one of my kids is wildly upset and needs some redirection: “Go back up. You don’t want to do this. I know you don’t. Go back up.”

Which feels kind of lame. I overhear a woman talking to her friend, abstractly comparing herself to the person on the bridge, and saying she understands. I wish I understood. But I know that I don’t. I couldn’t possibly. The closest I can get to empathy is recalling my old embarrassingly frequent public displays of adolescent angst, and the accompanying adolescent outrage that the world, in all its shallowness, didn’t come to an empathetic halt to acknowledge my suffering.

Now I’m finding strange comfort in that very shallowness. I look around at all the people who aren’t attempting a suicide jump. The cops, the commuters, the bikers and joggers on the trail, that woman with her bag of groceries, that mom who leans in to quietly explain it to her son before gently urging him on. I look at the lights on all the houses in the surrounding hills. And past the bridge, I can see my son’s elementary school.

It’s getting dark. I had no business being here in the first place, and I definitely have no business staying this long. I have to believe that she won’t jump. I have to know she won’t. So, I “know” it as best I can and start walking home.

But when I get there – when I sit at my computer and learn that this bridge that’s walking distance from my house is the second deadliest “suicide bridge” in the United States; that at least two people have died jumping from the bridge just this summer – I still feel frozen in my tracks.

“Go back up,” the bike guy yelled. And she did. That’s what I keep thinking about. I didn’t have the presence of mind, or the courage, or the vocal chords to do that. But I’m so glad someone did.

This filled me with sadness. It hurts to know how much pain so many people in this world are feeling.