Remembrance of Chimichangas Past 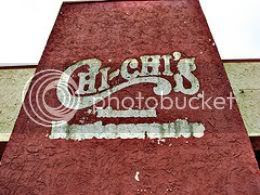 I barely gave it a second thought when Chi-Chi’s restaurant chain went out of business a few years ago. What can you do when the favorite restaurant of your adolescence causes an outbreak of Hepatitis A with its filthy, filthy scallions? Not a whole lot you can do, really. Shrug and be cynical. It’s not like the restaurant was so great in the first place. I hadn’t been there in years, and when we did manage to go it was typically done with irony. One more facet of innocent youth falls from grace like Milli Vanilli. And so it goes.

If it hadn’t been so crowded at Gorditos today, old Chi-Chi’s would probably still be the furthest thing from my mind. But as I was waiting in line, my eyes wandered behind the counter to a stack of taco salad shells on a shelf. I gave them a fond smirk. Remember when those were such a big deal? No? Well, I do. I remember being positively enchanted the first time I was served a salad in one of those things. I grew up in rural Pennsylvania in the 1970’s and 80’s, and such delicacies were not widely known about in our neck of the cornfield. I first heard about Chi-Chi’s from the hairdressers at the salon where I got my perms. (Yes, yes, it was the 80’s. Shut up.) They were a fun-loving bunch of WTF-are-we-doing-being-single-in-Berks County, PA folks always in search of an adventure. Sometimes that quest took them to comparatively cosmopolitan Allentown, where Chi-Chi’s was a favorite hot spot. (You overhear a lot of conversations sitting around with that perm solution on your head.) So, my 15-year-old self was pretty excited to learn that our local strip mall was expanding into an adjacent field, adding a Chi-Chi’s of its own.

Mexican food! Our town didn’t even have a Taco Bell in those days, and our school cafeteria had only recently added “tacos” to its menu. This was a very big deal. Such a big deal, in fact, that our Spanish teacher arranged a field trip to Chi-Chi’s for all her honors classes. We were going to immerse ourselves in the rich, vibrant culture of authentic Mexican dining. Sort of.

I was absolutely charmed. The faux adobe exterior! Painted tiles on the tables! Non-alcoholic blender drinks that looked just like real blender drinks! Appetizers! In retrospect, Chi-Chi’s was to Mexican food what The Olive Garden is to Italian food. But at the time, when “nice restaurant” meant “steak house,” the menu seemed exotic and authentic. I was so naïve, I didn’t realize that the entrees were named after Mexican resort towns. I thought “Cancun” really was the Spanish name for seafood enchiladas. Oh dear.

I described every detail to my mom that afternoon with all the girlish enthusiasm of an 18th century epistolary novel. A few weeks later, she took my sisters and me to Chi-Chi’s to celebrate the last day of school. I remember feeling so sophisticated, all pastel-eyeshadowed up, sipping that Nada Colada.

And thus, a cultural bridge to adulthood of sorts was formed. Chi-Chi’s was our place; the fancy restaurant we kids had discovered for ourselves. That’s where we went for Big Serious Dates with our love interests or Big Serious Talks with our best friends; that’s where we went with a group of friends before a formal dance or after a day at the downtown library working on our term papers. We weren’t full-fledged adults yet, but we were trying it on.

By the time I was in college, Chi-Chi’s was already becoming a joke. Nevertheless, it was our favorite spot for our Sisters Nights Out when we were all back at our parents’ place for school breaks. We weren’t so wildly impressed with it anymore, but somehow it still carried an air of the old sophistication that blended nicely with nostalgia for a time when adulthood seemed shiny and carefree. I got a taste of the real “adult” Chi-Chi’s experience during that year I spent living with my parents between graduate school and Real Life, joining my fellow WTF-are-we-still-doing-in-Berks-County friends for happy hours.

I even had my bachelorette party at Chi-Chi’s. That’s right. It wasn’t one of those wild, swinging bachelorette parties you’ve seen on TV. It was the kind of bachelorette party you have when it’s one month after 9/11, you’re 32 and already own a house with the guy, just flew back to PA from Seattle to get married in the few vacation days you were able to scrape up, and spent the last two days running around getting your marriage certificate and finalizing wedding arrangements. In other words, it was something of an afterthought. But it was perfect. Between the last-minute wedding-planning madness and actually walking down the aisle, it was so wonderful to just sit in Chi-Chi’s – the place where, in many ways, I’d found my adult self – with my fiancé and the sisters who’d been there for me through thick and thin. Pass the chili con queso. 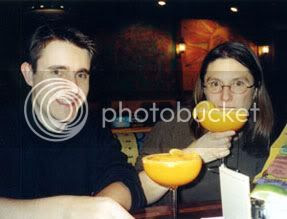 I’m pretty sure that’s the last time I ever went to Chi-Chi’s. I’d visit home as often as I could, but there were other restaurants now. My parents favored a fancy new Italian place where the waitresses couldn’t pronounce the dishes, but the tiramisu was incredible. Visiting Friendly’s became a bigger priority, as good Mexican food is plentiful in Seattle but classic ice cream sundaes are practically non-existent.

Two years after my bachelorette party came the Hepatitis A incident at a Pittsburgh-area Chi-Chi’s. It was horrifying, actually. Hundreds of people were sick. One man underwent a liver transplant. A few people died. I was anxiously pregnant with The Boy at the time and trying to avoid obsessing over news stories like that one, so I put it out of my mind as best I could. (Although I remember avoiding scallions with near-religious fervor.)

Just a few months ago, I drove past the old Chi-Chi’s while doing some last-minute Christmas shopping. I felt just the littlest bit sad to see the once-glorious faux adobe building standing empty like that . . . such a cultural epicenter in its day. Now the whole strip mall is bit of a ghost town, anchored by a gutted Circuit City and an Old Country Buffet. But it’s flanked by newer strip malls everywhere in the former cornfields, featuring the stores we used to travel to Allentown and even Philadelphia for – Borders, Pier 1 Imports, Old Navy.

On the one hand, it’s nice to see the comforts of suburbia in my old home town. I’m glad that my parents don’t have to lug themselves to the next county every time they want to visit a big bookstore or enjoy a Starbucks latte. But at the same time, there’s something very bittersweet about the loss of those fields and that one-time “fancy” Mexican restaurant. Just like the late teen years themselves, I don’t miss it. But I miss it. Hasta luego, old friend.
Posted by Floor Pie at 11:56 PM

I grew up in SC (and other southeast locations), so had a similar relationship to the exoticness of Mexican cuisine. In fact I don't think I even had a taco until I was in high school and then it was from Taco Time.

I know what you mean about the demise of Chi Chis. When we moved to Corvallis, OR in high school the Nendel's Inn was the place you put up your out of town guests if you wanted to impress them. I now know that it was, maybe, a notch above Ramada Inn, but we all went dancing there on Saturday nights, feeling like we were in the thick of the disco era.

Tom, my husband also grew up in Corvallis and loved your comment. Nendel's is no more, sadly. The whole building was torn down and replaced with a shiny new strip mall. We all went out for dinner at the "fancy" new Italian place on a recent visit. Circle of life...

when i was a kid in OK we used to go to Chi-Chis. my mom, being an ACTUAL mexican and from Nogalas, AZ, used to loudly wonder why they named a restaurant "boobs".

Maybe to compete with Hooters?

I didn't know Chi-Chis was no more. They introduced me to "deep fried ice cream" and for that, I will always be in their debt.