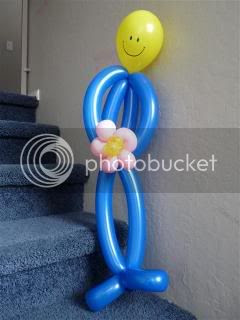 The balloon animal vendor captured my heart. Maybe it was just one of those days when you’re ripe for unconventional inspiration. Or comfort.

That’s why I went to The Gallery in the first place that day. My mom used to take us there when we were kids. The glamorous downtown Philadelphia mall had seen better days, or maybe I’d just been too easily dazzled as a kid. But it still made for a nice little nostalgic lunch break for my slightly-jaded twentysomething self – disappearing into a crowd; sipping my old favorite Hӓagen-Dazs peanut butter vanilla milkshake; and admiring the tall, twinkly-eyed, auburn-bearded balloon animal vendor.

He seemed like the personification of everything that was right about the world. There he was, smiling and calm, making people happy while all the lunch-break suits and class-cutting teens streamed by him in a preoccupied haze. Maybe someone had slipped something in my milkshake. Or maybe I was just so bored, or lonely, or dreading going back to work that I just had to act impulsively. I’m not sure how it happened. One minute I was smiling at him from my bench; the next minute I was at his side.

“Do you like your job?” I asked. His smile was warm and genuine, not at all bothered by the crazy lady asking him personal questions while he was trying to work. And he liked his job quite a lot, it turned out. Until recently, he explained, he’d been a social worker. But it was heartbreaking work; he was completely burned out. He used to make balloon animals around the office as a way to deal with the stress, so he decided to start a business doing just that.

I was captivated. It was like a romantic version of Douglas Coupland’s Generation X “McJobs.” Here was a guy with a heart, and he knew how to follow it. He was older than me, but what did age matter when Monica was dating Tom Selleck on “Friends”? It was also sweetly reminiscent of Party Girl – when Parker Posey’s character falls in love with the falafel guy. I said goodbye to Balloon Guy and went back to work with an extra spring in my step.

For days I walked around with the delightful prospect of him in my heart, figuring we’d meet again. Everything had an extra note of joy to it. Then I realized I was going to have to do something about it. He knew my first name, but had no idea where to find me (if he wanted to at all, of course). Could I do it? Could I go back to his balloon kiosk at The Gallery and breezily ask him out for coffee?

Well, I would try. It was only a few blocks from my office, not much of a detour on my walk home. Just stop by after work, chat, and ask him out. I’d already struck up a conversation with him out of the blue. How hard could it be to take the next step?

Damn near impossible, it turned out. His kiosk was all the way at the west end of the basement level, right across from the Market East SEPTA station. I stood at the opposite end of the mall, lurking in the doorway of a store, camouflaged by a steady stream of shoppers. I could see him in the distance, taller than I’d remembered. And busy. I kept telling myself I’d head down there after the next wave of commuters poured out of the station. But I was positively frozen. What was I going to say? Would he even remember me? Just how lonely and desperate and pathetic was I, anyway? After a few false starts I gave up and went home, feeling just the littlest bit heartbroken.

A few days later, I regained my nerve and went back to try again. I took slow, deep breaths and walked purposefully toward his kiosk, forcing myself not to think about it too much until we were face to face. Step, step. Breathe, breathe. I came to the end of the row of kiosks, right where his should be. But it was gone. Gone.

No! Maybe he’d relocated to another part of the mall. I walked every floor, end to end. I had no idea the damn Gallery was so expansive. Turns out it went all the way to Strawbridge’s. Who knew? And, more to the point, where was my Balloon Guy? Nowhere, that’s where.

If I hadn’t come so close to asking him out a few days earlier, maybe it would have been easier to let it go. But at the time, it seemed to me there was a “carpe diem” lesson in there somewhere. He had been right there, but I was too overcome with shyness and self-doubt to speak to him. And now he was gone. I guess I’ve got to find him, I resolved.

I called the mall office from work, putting on my best approximation of a yuppie mom voice (which, ironically, I never use now that I actually am a yuppie mom), affecting the confidence and the “surely you’re going to help me” attitude that I hoped would cover my paper-thin excuse for calling. I pretended I wanted to hire him for a child’s birthday party, but all I had was his first name and a vague recollection of his kiosk’s location. It worked. They found his business card and gave me his number. Before I lost my nerve, I called him right up and left a message.

For our first date, we met at my “safe coffee house” – right around the corner from my apartment building, where it was easy to make a hasty retreat if things took a turn for the weird. No need for that this time. In fact, it was easily one of the best first dates I’ve ever had. No awkwardness, no “what was I thinking!” moments; just a happy, easy flow of good conversation. We could not stop smiling at each other. All I wanted was to crawl across the table into his lap, but I’d seen Sense and Sensibility recently and was going for a more Austenesque/ joie-de-repartee restraint. Instead, I went home, put on some music, and danced around my apartment like a bad chick movie.

Our second date was even better. Well, at least it started out that way. Joyful conversation, joyful food, joyful margaritas. We cuddled a little before the movie started, chatting happily. I remember right before the lights dimmed we were talking about The Producers. He told me how he’d seen Dick Shawn live, and how brilliant he was.

The movie was Othello – which, in retrospect, may not have been the best choice for a date movie. Yes, it scores points for being a lush, star-studded film version of a Shakespeare play. And yes, it was playing at the art cinema, which was practically a requirement for First Movie Dates of the 1990’s. But it was still Othello, with all its blinding bitter jealously, vicious manipulation, murder, and whatnot. When Harry Met Sally, it ain’t.

I could never be sure if it was the film’s subject matter that clouded his mood that night. Had he experienced that level of jealously himself? Or that level of manipulation? Or loss? It could just as easily have been my own chattiness about the film, and Shakespeare in general, as we walked home. Maybe the “too smart” thing alienated him. Or, just as likely, maybe my Shakespeare prattle came across as callow and naïve, illustrating our age difference in a way that hadn’t fully occurred to him until then. Or maybe he’d seen an ex-girlfriend at the theater on a date. Who could say?

But whatever the reason, something shifted significantly with him that night. He gave me a short, bearded kiss goodnight and tapped my arm playfully. But we never recovered our initial joy of each other after that.

There wasn’t a phone call for a while, which made me feel a little panicky, sad, and resentful. Valentine’s Day came and went. Eventually, I went back to The Gallery and found him at his kiosk, where I hung around like a high school girlfriend trying to chat and be breezy. I couldn’t help it. When I really like somebody, it’s puppy time! So much for Jane Austen. He made me a balloon flower – a belated Valentine’s Day gift. Sigh…

There were a few strained dates after that, and then nothing. In the end, I had to resign myself to the old familiar “maybe he’s not that into me / maybe I’m not that into him; I just want to be into somebody” refrain of the single smart girl. I was sad, of course. But it wasn’t the end of the world. It’s so easy to blame ourselves, but the fact is, dating is hard. People come with so much baggage, it’s rarely anybody’s fault when things don’t work out.

I suppose I could regard him as a “the one that got away” of sorts. But I doubt he was really “the one.” I loved the initial spark, but I barely knew the man himself. Ignorance is bliss, and sometimes an abrupt ending can be a blessing in disguise. Our brief encounter had all the joy and longevity of a balloon itself. Nothing wrong with that.
Posted by Floor Pie at 12:14 AM