“And You May Find Yourself Living in a Shotgun Shack” 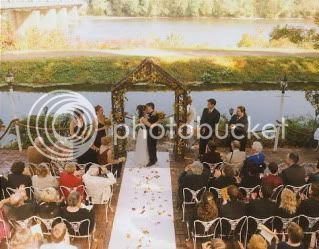 I can’t believe our wedding was almost eight years ago. I’d love to regale you with all the hilarious mishaps, but the thing is . . . there weren’t any. It was deliciously perfect, complete with autumn leaves gently fluttering about as we walked down the aisle to This Mortal Coil’s “Song to the Siren.” We said our own vows under an archway of branches and sunflowers by a river in New Hope, Pennsylvania. My sister made our rings; my other sister gave the funniest, most moving, Oscar-clip worthy toast ever; and my uncle’s jazz quartet played on. Everyone important in our lives was there, from Mr. Black’s old grunge bandmates to his 90-year-old grandmother to our parents, cousins, and all the various best friends from each stage of my crazy singlehood. “Happiest day of my life” doesn’t even begin to describe it.

In the beginning it was all beach trips and restaurants and joining the throng of bespectacled couples like ourselves at Scarecrow Video on Friday nights. Then one day, you wake up and this is outside your living room window, right where the driveway used to be: 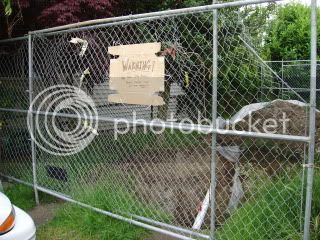 No, I’m not speaking metaphorically. This actually happened. An 8-foot-deep, oil-contaminated, festering pit took up residence on our property. And, okay, it didn’t exactly happen overnight. But it happened pretty quickly, and at the worst possible time.

Our marriage had already taken a bit of a bruising from a little miscarriage situation, one after the other during that first year-and-a-half. But just when we least expected it, I got pregnant and the darn thing decided to stick around this time. We were cautiously ecstatic.

When my company closed its Seattle office and I lost my job, it felt like a blessing in disguise. I’d been waffling over whether to return to full-time work after I had the baby; now the decision had been made for me. We had some money saved up to support a single-income lifestyle for a while. And I’d have two months all to myself until the baby would be born. Everything was comin’ up Millhouse.

Sort of. Even with no job, there was a lot of work to be done . . . particularly on the “property management” front. We were having an incredibly rainy winter (even for Seattle), and our basement was flooding almost daily. Then, just when I’d lined up a contractor to install drains and a sump pump, our ancient furnace started going out on a daily basis. I kept calling the oil company to fix it. Finally, we discovered that rainwater was getting into the underground oil tank and putting the furnace out. And if water was leaking in . . . well, then, oil must be leaking out.

What happened next was a series of phone calls, questions, arguments, and procedures – the details of which I’ve mostly blocked from memory. I remember the removal of a frightfully decrepit oil tank along with a few tons of contaminated soil. And I remember struggling to make sense of all the information coming in, scribbling it over and over again in my notebook, trying to put it into some kind of order. As an amateur property manager, I was in way over my head. But I must have been faking it pretty well, because Mr. Black was always asking me questions and getting irritated with the answers (as if I knew what I was talking about in the first place).

What it all boiled down to was this: The contamination was extensive and predated our ownership of the house by many years. The company that removed our tank wanted to just keep digging and digging until the soil tested clean, but we’d blown through a significant portion of our savings to pay for the few tons they’d removed already.

Eventually, we would hire a geologist and an environmental lawyer and find a more efficient way to get it cleaned up. But during those first confusing weeks, with our savings dwindling and my due date approaching, neither of us was in a clear enough frame of mind to arrive at a good solution. Mr. Black wanted the previous owner to pay for the cleanup. I wanted to hide under a pile of coats à la Homer Simpson. Out of our league, frustrated, and scared, we fought like a sack of cats.

I’d like to say that the arrival of our son made everything all better, but anyone who’s lived with a newborn baby for even a few hours will recognize that for the damn lie it is! Oh, don’t get me wrong – we were amazed and joyful and madly in love with the little guy and all that good stuff. But there wasn’t a whole lot of sleep going on, either. We were in those clueless days of early parenthood when it takes both parents and a Dr. Sears manual just to change one diaper. And the crying. Oh, the crying.

Meanwhile the pit lived on, baffling all the friends and well-wishers who stopped by to see the baby. One afternoon I was standing at the window with my friend Ana, explaining the whole absurd situation for the umpteenth time, when we saw a large orange hamster slip through the chain link fence that surrounded the pit. It waddled closer and closer to the edge, sniffing.

Ana ran outside to divert the little bugger, but it was too late. We braced ourselves for the worst and peered into the bottom. No sign of the hamster. Before there was even time to look at each other helplessly, we heard children’s voices calling down the street.

Gulp. I held my three-week-old baby close, hoping it would buy me some sympathy. As my neighbor and her two grandchildren approached, I blurted out my confession.

“I’m so sorry. Your hamster fell into our hole. Oh I feel just terrible. Please let me buy you another one. I’m so sorry.”

The grandmother, who’d been carrying Daisy Mae in her purse when she’d made a break for it, seemed suspiciously not disappointed by this turn of events. She just smiled and insisted it was okay, wouldn’t hear of me replacing the hamster. Meanwhile, her grandchildren pressed their faces up against our chain link fence, looking for their lost pet.

“Look! There she is!” one of them exclaimed. And there, swimming furiously through the pool of oily rainwater at the bottom of the pit, was Daisy Mae. We watched in amazement as she made it to the water’s edge, where she dug herself a little hole and huddled inside. What now?

Ana tried lowering various items into the pit for the hamster to crawl into – an old hanging basket, a bucket on the end of a pole. No deal. More and more neighbors kept coming over and trying different hare-brained schemes, but Daisy Mae wouldn’t budge. Ana called the fire department and the Humane Society, but rescuing a hamster was apparently pretty low on their priority lists. A few neighborhood cats hovered like vultures around the edge of the pit while Daisy Mae huddled tighter into her hole.

Finally, I called the company that dug the pit in the first place. I explained the situation and waited for the guy to tell me to take a hike. Instead, I heard him yell to a co-worker “Hey Bill, we got another pet rescue!”

Within a few minutes, Bill arrived at our place with a ladder, rubber overalls, and hazmat gloves. By now quite a crowd was gathered around our pit. The children had climbed our neighbor’s tree to get a better view. Bill climbed down into the pit, scooped up Daisy Mae and put her in a bucket, and returned to the crowd’s triumphant cheers. He handed the oily little rodent to the grateful children and their less-than-thrilled grandmother. Right about then, Mr. Black arrived home from work with a giant question mark over his head.

Yes, we were a long way from that perfect October afternoon by the river. It would be months before the pit would be filled back in; years before our soil would be clean and even longer before we’d reach a settlement agreement with the previous owner. Meanwhile, there were money problems, more miscarriages, and the uniquely terrifying challenges of parenthood.

With all we’ve been through, it’s hard to believe it’s only been eight years. Even though we were in our early thirties when we got married, it’s sort of like we’ve grown up together. We’re not done with life’s challenges, not by a long shot. But together, we learned how to do this “grown up” stuff at all. 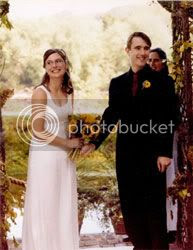 Sigh . . . look at those crazy lovebirds. Happy anniversary, honey.
Posted by Floor Pie at 12:37 AM

You really do have a Simpson's expression for every situation. Glad you made it this far!

I can see now that I am going to miss a significant portion of my life in the next few weeks simply reading about your last few years! But I am OK with that because I am simply taken by your writing style Toby! I Love It! Congrats and and I look forward to looking back over your last eight years. Happy Anniversary!

Two weekends ago I was a member of a panel put together to discuss the topic of "men and women in relationships." I was invited as a sort of rare bird, I think, because only two other people on this 12 person panel were married (to each other) and they were pretty much newlyweds. My 24 years of marriage (26 if you count the 2 years of living together beforehand) was unfathomable to the audience which was comprised of primarily single 35-50 year olds.

As I sat there listening to people talk about relationships in terms of "magic," "enlightenment," and "bliss," I found myself getting increasingly irritated. I kept trying to make the point that marriage is about love, of course, but it's also about doing things together, experiencing things together, and putting up with crap together. Blank stares.

It set my teeth on edge as people talked about formal techniques for settling conflict, or negotiating "space," or allowing for mutual growth. I tried to make the point that it's normal to say awful things, take advantage of each other, and to sometimes not even like each other. I said, "Theoretical relationships have nothing to do with real relationships." Nothing.

At one point the question was posed, "How do you know that you're loved?" I answered, "She stays." Bupkis.

In exasperation, I said what you say here, "We're family." I still doubt anyone got it, but I'd finally found the words that satisfied me. That's what it's all about.

Thanks so much, everyone.

And Tom: "How do you know that you're loved?"?! What an infuriating but intriguing question. Did they mean "How does ONE know s/he's loved" or "How do YOU, married-for-24-years guy, know YOU're loved"?