Mere minutes from the Pennsylvania Turnpike, it felt like I was the last soul left in the world as I steered my way through the gloomy country night. If the Headless Horseman happened to sidle up to my old Volvo, I wouldn’t have been all that surprised. I was already feeling haunted, though it was entirely of my own making.

I just couldn’t bring myself to admit it to my mom over the phone that afternoon – after Josh left; after we’d spent the last 18 hours gazing teen-style into each other’s eyes, telling our stories, holding each other as closely as we could – I couldn’t bring myself to say out loud that I might be falling in love (at last!) with a guy who was about to move far away (again!). Because this was getting to be embarrassing. I’d been in this situation so many times before, it was beginning to look like I was doing it on purpose.

But I wasn’t. Really. Josh was my co-worker’s roommate (well, he was crashing on my co-worker’s couch, but I didn’t know that until later), and we met at a work-related happy hour at some brew pub in trendy Manayunk. I was sitting with another co-worker and his frat brothers, one of whom was picking a fight with some dude who’d set his beer down on our table. When I slipped away from the drama to join the first co-worker at his table, I found myself sitting next to this adorable guy with glasses, a Phish hat, and a smirk to match my own. Practically upon introduction, we launched into one of those amazing conversations that makes you realize how much work most ordinary conversations usually are. It was seamless. He was witty and warm. I swear there was an actual twinkle in his eye.

He was also about five years younger than me, but I barely registered that fact. Who knows where things might have gone that night if the situation at the next table hadn’t escalated to a fist fight, getting us all kicked out of the bar. I got on my train back to Philly and hoped he’d call.

But he didn’t. I agonized over it for weeks, wondering if I should ask my co-worker to give him my number or not. Then one day at lunch, during a lull in the conversation, I suddenly found the nerve. My co-worker was so genuinely delighted to help, it warmed my heart. He was sure Josh would be happy about it. He’d talk to him. And then he mentioned that Josh was moving back in with his parents in Cincinnati at the end of the month. Was that a problem?

Maybe I should have slammed on the brakes right then, but I decided to go the carpe diem route. And it was wonderful. Every moment with that guy was pure dessert – rich, decadent restaurant dessert. We savored every minute of each other’s company. We talked and hugged so much; practically memorized each other’s faces. We spent one miserably cold October night cuddled up in my apartment – a mostly-clothed, relatively chaste encounter, but easily one of the most romantic nights of my singlehood.

It was early afternoon by the time he finally left, but I could already feel the darkness encroaching. We had one week left, and then he’d be gone for good. Incredible sadness poured in. Somehow, my mom knew to call me at that precise moment. And even though I just wasn’t able to tell her any of this, I think she got a general sense of my despair.

“Come to the pumpkin party tonight!” she urged. It was going to be so much fun! Her folk artist friend Barbara hosted a fabulous open house every Halloween featuring her fall paintings and a house full of jack o’ lanterns carved by the local high school students. I’d been hearing about it for years, but never attended one. From my lonely Center City apartment, it seemed like a world away. Which is exactly why I decided to go.

So there I was, driving down a deserted country road on a pitch-black night, haunted by the impending loss of a love that had barely blossomed. Somehow I was able to read my scribbled directions and navigate my way to the artist’s home. And there it was: A big old farmhouse overflowing with gleaming jack o’ lanterns. Every window exuded an amber glow that seemed to warm the chilly black night, and I could hear the sound of fiddles (actual fiddles!) and general merriment within. 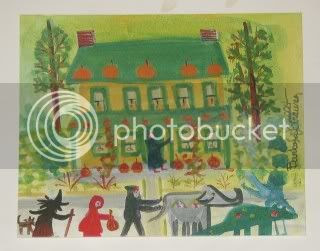 Apparently, I’d just missed my mom singing folk songs with the fiddlers. Every room was full of paintings and conversation with an eclectic bunch of local artists, family, and art lovers. I found my mom and Barbara in the kitchen and set to work helping them peel and core apples to bake with brown sugar and raisins. Working late most nights, living alone in the city within a block of falafel and Mexican take-out places, I hadn’t had much use for the kitchen lately. But it was comforting to find that my hands somehow remembered what to do with a baked apple.

I drifted from room to room just looking at the paintings and occasionally chatting with someone about my job. Josh barely crossed my mind. I felt so blissfully out of context as I wandered the pages of this storybook landscape. As the evening came to a close, Barbara approached me. Was I driving back to Philly tonight? Could I possibly give her friend Sebastian a ride? Sebastian lived only a few blocks from me, and it would make driving through that Sleepy Hollowesque gloom a little nicer. I agreed.

Sebastian, it turned out, was a little on the haunted side himself. Way more than me, actually. He’d recently lost his wife to cancer, and it was all so raw and vivid for him, still. He loved her so much, he could barely fathom that she simply wasn’t there anymore. He wanted to talk. I’m not much of a talker myself, so that was fine with me. And as we drove back to the city, we turned the Halloween hitchhiker paradigm on its ear as this lonely, deeply haunted man spoke of his lost wife and his various thoughts and philosophies about it all.

She’d wanted a dog, he said, toward the end when there wasn’t much more to do but huddle up at home to ride out the disease. She’d wanted a sweet little lap dog to give her that uniquely canine rush of pure, joyful love that the grieving humans in her life just couldn’t provide. But when they went to the local animal shelter, the only dog available for adoption was a big, goofy mixed breed with a scraggly coat. And that was it. She fell instantly in love with that dog. “Honey, Honey, are you sure?” he’d asked. She was sure. So sure. That was her dog, and she poured every ounce of love she could spare into the big furry guy. Sebastian had never been a fan of big dogs himself, but he loved that dog still, as much as she had.

I drove. I listened. It broke my heart and renewed my faith in love and humanity all at once. It was right out of Wings of Desire or something. And then he asked me about myself. What do you say after a story like that? “Boo hoo, I just met this cute guy who’s about to leave the city”? Hardly. So I tried to answer his questions as breezily as possible, but I think he still got a sense of the sadness I’d been holding. “Life is process,” he said thoughtfully. I’m not sure if he said that to comfort me or to comfort himself. I’m not even completely sure how he meant it. But for some reason, I did find that phrase incredibly comforting, and it’s stayed with me for years. Life is process. Indeed.

Back in the city, we went our separate ways. And a few nights later, I saw Josh for the very last time. It was a Halloween party, appropriately enough, at my co-worker’s place where Josh was still couch-crashing for a few days more. He dressed as Waldo from Where’s Waldo. I dressed as Velma from Scooby Doo. (Neither costume was much of a stretch for us.) The party was hilariously fun, but I found myself a bit distracted and sad.

When it was over, Josh and I wrapped ourselves in a sleeping bag on the living room floor for our last night together. The next morning, we had breakfast at a diner with the other roommates. Then we returned to the house alone, put on a Cowboy Junkies CD, and got right back in that sleeping bag for one last afternoon of soul cuddling. Still in his Waldo shirt, he told me he was so happy we’d met. It seemed like he was going to say something more, but his voice cracked, almost like a sob, and he just held me. He drove me home in the dark, reaching over to grab my hand at every opportunity. I watched as his car disappeared into the night. Gone. As if it had never happened at all. And I was alone again with the rest of the city’s lost souls.

I suppose I’d hoped, maybe even expected, to see Josh again. He hadn’t been very forthcoming about future plans, and after all my years of dating I’d learned to tread lightly on such matters. I did send him one letter, but I never heard back. I kept a widow watch at the mailbox for about a month before finally letting go.

I tucked the memory of Josh away like a memento; the perfect jewel of our experience just dangling from a strong, simple chain. We never would have made it as a couple. He was only 23 and we weren’t that much alike, really, in retrospect. Him leaving right as we were beginning to grow fond of each other somehow created the illusion that it was this Great Love. But the fact is, all relationships start out with this level of intense early bliss. They don’t typically end right at the crescendo like that.

Sadly, the very best relationships end like Sebastian’s. One partner fades away and the other is left with an overflowing heart of memories, sorrows, and joy. Haunted. It’s his story that I always remember this time of year. The truest, saddest, most beautiful ghost story I’ve ever heard. And it’s his insight that gets me through the gloomy patches of my own. Life is process.
Posted by Floor Pie at 9:46 PM

You are such a beautiful writer, Toby.

What a magnificent Halloween story. It's wonderful how the ghosts from the past continue to haunt us throughout our lives, talking to us, reminding us, and showing us how far we've come.

I have tears in my eyes. Lovely and poignant.