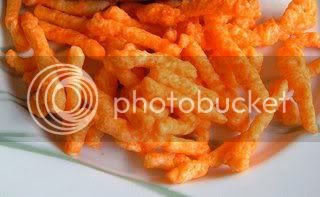 Well, that “Orange Underground” Cheetos ad campaign has been around for a year now, and damned if they didn’t get me. I can’t believe it. After a year of scrambling for the remote control to make it stop – one year of being simply confounded by the ads when I did have to sit through them (“Why are they doing this? On what planet would this ad even work?”) – I found myself facing a selection of bagged salt-o-riffic snack foods, remembering that landromat commercial, and selecting a bag of Cheetos. No kidding.

Not only that, but I let the kids have some too. They caught me surreptitiously opening the bag in the front seat before we pulled out of our Target parking space, and the jig was up. I gave them each one and started a minor feeding frenzy of my own as the questions began.

“Mommy, why did you buy Cheetos?” asked The Boy.

“I don’t know. I was just in the mood for an unhealthy snack.”

“Mommy how do they make Cheetos? Do they take a bunch of cheese and smush it all together?”

“No, honey. It’s cheese-flavored chemicals and fried bread dust,” I explained, winding my way out of the parking lot and lipping powdery cheese dust from my index finger.

“I want-a more chip! More chip!” Little Girl insisted. I grudgingly complied. At least she doesn’t know them by name. Yet.

How did I get here? Not that long ago I was walking home from the local food co-op with a baby in a sling and a backpack full of organic, dye-free treats. Sadly, my pricey trips to the food co-op were one of the first things we slashed from the budget when money got tight.

That still doesn’t excuse the Cheetos, though. What was I thinking? Even now, Mr. Black is watching the ad on YouTube over my shoulder and sputtering “Why would they base an ad campaign on their product being so disgustingly colored that you can use it to permanently destroy other people’s clothing?” And I completely agree with him. This has been my stance all along. So how did they get me?

Let’s take another look at that commercial: A cute Everybrunette realizes she’s dropped her undies on the laundromat floor, cringes and hurries to pick them up. But not before some Angela-from-“The-Office” clone shames her with a disgusted look and a cutting remark. The brunette looks irritated but hopelessly resigned. And then Chester (Cheetos’ version of The Simpsons’ Poochie) appears before her like some mystical anti-Obi-Wan of pranks, encouraging her to strike back by placing a handful of Cheetos in the dryer with Angela’s whites. Look again and Chester is gone. Cool brunette pops a Cheeto and looks into the camera with wide-eyed resolve before the message “Join Us” appears on the screen.

In an interview with Slate.com, managing partner Robert Riccardi of ad agency Goodby Silverstein had this to say:

. . . Chester's mischievous new personality stems from the idea that ‘powering down’ Cheetos as an adult ‘feels like a nonconformist moment. You're supposed to be eating arugula dip, but you have a nonconforming desire.’ Thus we see Chester (Riccardi says he exists only in our deep subconscious) encouraging people to shatter all sorts of adult norms.

While women are just as susceptible to “nonconforming desire” as anyone else, I’d guess that we tend not to be big Cheetos consumers. So many snacks are just way more impossible to avoid. If you’re female, there’s practically a cultural imperative to crave chocolate or cheesecake (although I’m not a big fan of either). It’s easy to slip up and order crème brûlée for dessert. It’s easy to polish off a few string cheeses with the kids or have a beer or two with your husband at the end of an exhausting day. But those shiny bags of toxically fluorescent orange cheese blobs with a mascot aimed at teen boys? That’s pretty easy to avoid.

So now we have this feisty girl who finds the spirit to fight the judgmental bitches of the world in her bag of Cheetos. She takes the very messiness of the snack that one might instinctively find unappealing and finds empowerment there instead. Cheetos transform her from ashamed and beaten to sassy and subversive. Join us.

But how does it really feel to consume a bag of Cheetos?

There might be a little sassy subversion in the initial purchase. As a grown up, and especially as a mother, you spend so much time telling yourself “no.” No, you can’t blow off the preschool meeting. No, you can’t afford an extra vacation with just you and your husband. No, you can’t go to the bathroom by yourself. You work so hard, put yourself dead last, but you’re constantly messing up anyway and there are plenty of people standing there ready to judge. How incredibly gratifying to put a little “yes” in your day once in a while. Yes, we are going to listen to Sleater-Kinney instead of Choo Choo Soul. Yes, I am meeting my old co-workers for happy hour. Yes, I am going to buy this bag of forbidden junk food.

So, there’s that. But how does it feel to actually eat them? Gratifying. Maybe even a little stimulating, The flavor and texture are evocative, possibly reminding you of better food. But this is food on crack. And when the intensity of salt, sugar, and MSG kick in with a salivating shock, your jaws work a little faster and your mouth is somehow busier than it is with real food. It’s not just a snack; it’s a process.

And then, about halfway through the bag, you realize “Wait. These taste disgusting. Why don’t I just lick the inside of a salt shaker and be done with it?” So you stop. Stop. Close up the bag, put it somewhere out of reach. And if you’re lucky, that bag will stay closed until someone else comes along to finish it for you. But it’s more likely you’ll be driven to see this snack attack through to the bitter end, slogging through the now-overwhelming salt/fat/crunchiness of it all just for the sense of completion and to have them gone. Ugh. Gone. It’s a little like letting yourself cry. It works, but somehow you feel a little worse afterwards.

There’s no harm in it, really. Everything in moderation, right? I’m just noticing how very far the ad’s promise of empowerment falls from the actual Cheetos-eating experience. But there’s one important part they got right: That girl’s face when the other woman smacks her down. She wants to say something, but she knows she’s been beaten. She sighs, puts her hand on her hip and wonders what to do, knowing there’s really nothing she can do. That’s got to be my face at least once a day, probably more. But no amount of Cheetos-stuffing is going to set it right, talking cheetah or no. Having downed that whole bag on the drive home from Target, I can say that with absolute certainty.

I’ve been an advertising worker-bee myself, and I certainly don’t hold it against these folks for doing their job (and doing it so insidiously well!). I’m just a little surprised that I fell for it myself, that’s all. But tomorrow’s another day. Time to have a nice virtuous glass of water and get some rest.
Posted by Floor Pie at 11:57 PM

Great job isolating the humiliation aspect of those Cheetoes commercials. I haven't seen the ad you're talking about but I did see one about a woman at a kids' soccer game who smears Cheetoes dust on the back of another woman's jacket because the woman brags about her kid's talent in some ridiculous language immersion program. That moment of having no appropriate response available to that humiliation is exactly the mechanism they're isolating.

Humiliation and failure at an adult task is the emotional pathway back to the juvenile urge to physical revenge, as well as the juvenile urge to stick any old thing in your mouth. Serious props to Cheetoes on the extremely effective campaign. And to you, of course, for breaking it down so well.

Thanks, mm! I haven't seen that ad with the braggy mom, but that is hilarious and sad.

There's a fancy language immersion school in Seattle's public school system that has parents stepping on each other's faces to get into. No one's braggy about it, but the "emperor's new clothes" effect is enough to inspire a Cheetos binge sometimes.

At least in the newer commercials, they're about getting back at asshole-y people. In the first one, a guy walks by the cubicle of an absent co-worker who has a spotless cubicle. The guy is eating a bag of Cheetos, of course, and Chester gives him the "go ahead nod." So he takes a puff, puts in on the keyboard of his white Mac laptop and closes the lid with a sickening crunch.

I haven't eaten a Cheeto since.