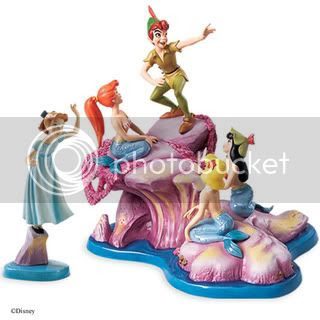 I haven’t introduced my kids to Disney’s Peter Pan, mainly because of the negative Native American stereotypes. But I was reading the Golden Book version to another little girl recently, and this whole other level of "awful" that I’d forgotten about came rushing back to hit me on an unexpected gut level: Wendy’s miserable, degrading time in Neverland.

Do you remember this? Peter’s gal-pal Tinkerbell can’t stand her. She makes Wendy into a joke at every opportunity, tries to get Peter’s buddies The Lost Boys to shoot her down. Peter rescues Wendy, only to ditch her for some sexy mermaids, actually laughing while they tease her mercilessly. Then he ditches them all to rescue “Indian” princess Tiger Lily and they dance and flirt while Wendy is forced to collect firewood with the homely squaws. Neverland? Sounds like every bad party I ever attended in my twenties. Hell, it sounds a lot like right now, actually.

Last night I emerged from two days of vertigo, which followed a week of worry over The Boy’s school stuff, which had landed on top of a big pile of mundane-but-persistent domestic worries that’s been accumulating for some time now. Anyway, I emerged from this heap of crap to find my Mr. Black in a slightly better mood than usual. He has an unusual spring in his step this week, a friendliness to him that I don’t see much of anymore. He’s usually all “Time to make the donuts” this and “Gotta watch Wapner” that. But these days he’s got a spark. Lighter. Joking. More flirtatious and a little nervous. And it’s all because his old girlfriend is coming to town. Which feels a lot like Captain Hook’s cannonball blown right through my cloud.

But what can I do about it? Nothing, that’s what. He wouldn’t see her if I asked him not to. But that wouldn’t erase his feelings for her. It wouldn’t somehow magically transfer those feelings from her to me. It would just make me seem even more like the unreasonable ball-and-chain that our culture already expects a wife to be. I truly wish I could just let him go and not be the least bit bothered. But, as the great Mr. Croce once said, that’s not the way it feels.

Of course I trust him to be physically faithful to me. Of course I do. But sex isn’t even the point, really. His dreams and his good moods are all caught up in this other woman. Technically that’s not infidelity. That’s just a big slimy bucket of “Sucks for you, wife.”

Monogamy. It’s the “Wendy” trap. Once you pin yourself down to a guy, it’s all over. You might start out as Tinkerbell, but somehow, even if you’re still independent, sexy, and free in a million ways, your devotion to the guy morphs you into a de facto Wendy of sorts. Suddenly there’s all that messy unpleasantness of actually loving him to the point where you’d be devastated if he decided to stop loving you back. Suddenly you’re vulnerable and foolish, and a lot less alluring than you used to feel.

Being Tinkerbell, the buddy, the “not girlfriend” is a hard identity to let go. It’s so much happier to be light and free. Instead of a boyfriend, you have a pack of platonic male friends; your Lost Boys. You can tease each other, quote Star Wars and The Simpsons, out-gross each other, bask in a little harmless sexual tension safe in the knowledge that it’s never going anywhere. Now that’s Neverland!

But once you’re a girlfriend, even if nothing ostensibly changes . . . it changes. Now it’s just you and one guy teasing each other and quoting The Simpsons. Sexual tension gives way to actual sex, which is divine, of course, but not without its messy emotional complications. And now there’s waking up together and seeing each other when we’re bored or ugly or preoccupied. It’s not just a delicious distraction anymore. So, either it stops being fun and fizzles out. Or you grow fonder somehow, latch on to deeper feelings, hold on tight, and dive into the murky seas of “relationship” together.

It was a struggle for me at first, but I’ve made my peace with it over time. And I realize I’m being a little unfair here. I’ve written about my own crushes and distractions, always making a clear distinction between a wandering mind and a faithful heart. If I can recognize this in myself, surely I can extend the same courtesy to him?

You’d think so, wouldn’t you? But I can’t seem to get my heart around that level of emotional rationality. I suppose I’ve always viewed my own crushes and distractions as a sort of defense mechanism. He’s caught up in all his male angst weight-of-the-world whatnot, preoccupied with worries he doesn’t like to share. He’s indifferent to about 85% of my affection. He doesn’t lavish me with the kind of Twilightesque adoration that melts my toes, so I sometimes happen upon imaginary toe-melting elsewhere. Meanwhile, I’m tired and stressed and preoccupied myself. I’m probably missing his affection cues, too. Since I’ve started writing again, I’m usually pounding away at the computer when he goes to bed, barely acknowledging his goodnight kiss. So, who can say?

Some of my faithful readers out there in Blogspotland may have some concerns. Why am I writing about this here instead of talking to him? Well, I can reassure you that this is all well-covered territory around here. This is not the first time this woman and his feelings for her have darkened our metaphorical doorstep. I haven’t written anything here that I haven’t already said to him. He tries to be respectful about it, tries to keep that spark for his old girlfriend contained. But sparks are impossible to completely contain.

So why am I sitting here typing in my jammies instead of parading around in Victoria’s Secret to lure his attention back to me? Because I’m sad and my heart's not in it. And besides, I’m pretty sure attraction doesn’t work that way. Okay, so maybe I spend a fair amount of my day covered in toddler snot. Maybe I have to be the bearer of bad news sometimes, or even the one who nags. But I’m still pretty damn desirable for an almost-40-year-old mom, and I know he appreciates this. We still genuinely adore each other through our fog of life’s distractions. We still have fun together. We still feel loved. But how can a wife of seven years compete with the fireworks that a guy’s long lost youth inspires? It’s not my fault. And it’s not his fault, either. It’s just there.

I’ll tell you what seems really distasteful right now, though, and that’s one of these “put spice back in your marriage” solutions. Spice schmice. All the date nights and non-missionary-position sex in the world won’t make us new to each other again. I wouldn’t turn it down, of course. But it’s not going to solve this problem. He’s never going to look at me the way he did when we first met, when I was full of mystery and possibility. When I wasn’t such an open book.

This guy’s seen me cry, sweat, lose jobs, vomit, accidentally set a menu on fire, and wash period stains out of my panties in his bathroom sink. This guy has seen me through five miscarriages and two full-term pregnancies, seen me flat on my back with my guts slopping out of an incision while he held our new baby across the room. He’s seen my grey hairs emerge, wrinkles emphasize my smirk lines, and my once-extraordinary sexual capabilities sputter and sigh like an old car under the pressure of mom-hormones and sheer exhaustion. We aren’t just “married” on paper; this is in our blood somehow.

But spice? Spice might get us laid a little more often, but it will never bring back the storm of a first love. Having met each other in our late twenties, it’s possible we never felt that degree of unbearably intense passion for each other in the first place. Oh, there was passion, of course. We were very swept away by each other. But we were tired, too, and ready for comfort. We proceeded directly to long weekends in each other’s arms and a sort of mutual giddiness just to be sharing a movie rental. There was no drama then, and there’s certainly no drama now.

Well . . . except for this business of him seeing his old girlfriend.

But, as I said, there’s nothing to be done about it. I trust him, but I don’t have it in me to even pretend to be cool about it. It hurts like a paper cut; small but insidious, bleeding way more than it reasonably should. But I know in my heart it’s not personal. If we’re honest with ourselves, we have to realize that these distractions are natural, inevitable, and bear no real implications on the love we have for each other. And I know this pain will pass. She’ll come to town, he’ll be all twitter-paited and distracted by her for a few days, and it will gradually pass. A little blood in a wide, strong river. And the river simply washes it away.

Bondage & Leather: The tried and true way to keep your man at home. And he can always tell her "Sorry - I was tied up"

Okay, that's a lot funnier now that I know who wrote it. Thanks wdd...