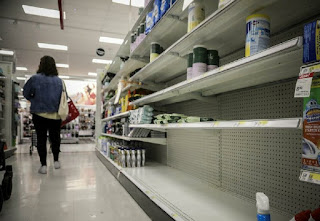 I don’t mean to make light of it. Or maybe I do. It all feels so familiar, is all. Remember swine flu in 2009? Remember how people drove to other counties and stood in line for hours with their kids for the vaccine?

Grrrl was one month away from her 3rd birthday – just young enough to get her in under the wire when a limited supply of the vaccine became available at our pediatrician’s office. I felt a little silly showing up an hour early, but there was already a line around the block. In November. In Seattle. During a phase when Grrrl had some pretty serious opinions about never wearing a coat. Other parents were smart and had one waiting in line while the other waited in the car with the babies and toddlers. And they all had coffee. Why oh why had I not thought of bringing coffee?

Meanwhile, Mr. Black had already survived a confirmed case of that very swine flu two weeks earlier. He’d quarantined himself in our bedroom and actually managed to not pass it along to the rest of us. Still, my Grrrl and I hunkered down in the rain and waited for the vaccine line to move, reading her favorite books and singing her favorite songs, coat-less and coffee-less. We didn’t get swine flu. We didn’t even catch colds.

Now my Grrrl is 13, and she diplomatically asks if she can stay home from her Saturday activities. “Are you worried about coronavirus?” I ask.

“No, I’ve just had a bad week,” she says stoically, and after some encouragement tells me that some adult at school publicly called her out and scolded her for holding hands with one of her friends in the hallway. She’s not outraged, or even angry. Just quietly, deeply mortified.

To make her feel better, I shared some of my own stories from the week. It started with dumb jokes, of course. Somebody coughs. Three other 8th graders yell and point “Aahhh! Coronavirus!” and it’s all fun and games until the anxious kid with seasonal allergies won’t come to school anymore.

The next time something like that happens, it’s not a joke at all. A different anxious student is screaming for real and demanding that student at her table stop sniffing (to be fair, it is pretty gross). But the also-anxious sniffing student she’s screaming at is crying. “It’s just phlegm. I don’t have coronavirus.” He happens to be Asian, and he’s fed up in a way he doesn’t completely grasp after several days of this. I intervene and manage to make it a little bit better. But the boy still cries on and off for much of the day, and the girl hasn’t been back to school since.

At my yoga class, the teacher asks us if we’re all working from home as much as possible. I’m surprised to be the only one in the class who doesn’t answer with an enthusiastic “YES.” When I say that I work in a middle school, so much about them freezes. Not just their bodies, but their facial expressions. It’s like..they have the presence of mind to not chase me from the room with pitchforks and torches, but they haven’t perfected a replacement behavior for that impulse. I joke about it on social media, but that look of frozen terror in those faces is going to haunt me. There’s something very….not funny about it.

At school, the jokes continue. We’re asked to present a lesson from our school nurse during homeroom to curb the hysteria and channel all that anxious energy toward hand-washing. You're welcome:

In the hallway, students are joking “Let’s lick the doorknobs so they cancel school!” There are reports of students fake-sneezing at people in Starbucks because HILARIOUS.

Over the phone, a Public Health nurse advises me to just keep swimming, but monitor for symptoms for the next fourteen days. So that’s what I’ve been doing. Fever? Nope. Coughing? Nope. Shortness of breath? Nope with a side order of nope sauce. Lately I’ve been starting each morning by taking a big, luxurious breath of rich, creamy, full-fat oxygen. I count my blessings. And I acknowledge the privileged space I take up in this world.

I’m honest with Grrrl about all this, and I talk her through the likeliest scenarios. I assure her that even in the worst-case one, the four of us will be safe and sound with our health insurance, our paid sick days, our ability to purchase food and supplies ahead of time, our access to technology at home, and our being in low-risk groups to begin with.

My fears are for the people who don’t have access to all of that. And my fears are for a society that is elbowing them out of the way to snatch up the last bottle of hand sanitizer.