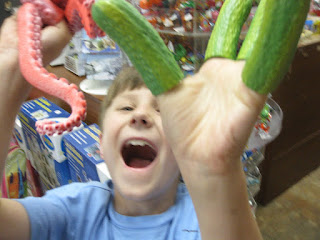 “I don’t mind having a boy,” a friend of mine mused on the playground, watching her own adorable baby boy explore the bottom of the slide with wide-eyed wonder. “I just hope he doesn’t become one of those boys.”

We both glanced in the direction of a boy about four or so, running with joyful abandon, brandishing a stick in the air. Little Grrl, age three at the time and well-versed in this world as a little sister, ran merrily alongside him while my friend’s daughter observed with apprehension.

Running with sticks was barely a blip on my danger-meter in those days, but I knew I was in the minority. The previous summer, at that same playground, my friends and I looked up from our conversation in disbelief as a hippie-skirted nanny chased our sons around the park, admonishing them to put down their sticks. My mother-in-law could barely tolerate children walking with sticks, and had a host of grisly cautionary tales to back it up.

Somehow, The Boy and his chums managed to make it to age 8 without blinding themselves or any of their classmates. But being perceived as “dangerous” by well-meaning observers has only just begun.

Gone are the chubby cheeks and Thomas the Tank Engine T-shirts. They carry themselves like the wily young men that they are becoming, all big feet and sharp eyes. Now when The Boy runs across the room and jumps into my arms, it’s like being hit by a bus. The sheer force of it is more than I can absorb sometimes.

There’s a sweet, simple sense of pride in watching your little dumpling of a baby grow up. But underneath that pride lurks the nagging fear that he’s that much more likely to be perceived as a criminal.

Boys are suspect. As a white boy, he’ll at least avoid the deadly threat of racism, and my heart breaks for the mothers who have to live with that fear every day. But as an Aspergian who’s still learning how to manage his stress, outbursts, casual rudeness, and sensory seeking that truly are part of the disability…as a boy who’s wickedly smart, deeply insecure, and socially on the weird side…as a boy whose intensity has yet to collide with the wild, unpredictable shifts of puberty…Well, let’s just say I have some worries of my own.

“Behaviors scare people,” said a representative from our state Office of the Education Ombudsman to a roomful of special education parents. “Ever since Columbine…”

Of course, I thought. All roads lead to freaking Columbine.

And she went on to explain that when principals mistreat our special ed children, suspend and expel them from school instead of providing positive behavior supports, allow teachers to dangerously restrain or isolate them, that “They do truly believe they are protecting the other students.”

Right after that meeting I wrote to Dave Cullen, author of the outstanding book Columbine, asking his thoughts on this. He said he hadn’t heard of special ed students being targeted in particular, but it wouldn’t surprise him. He said there’s a lot of misdirected “clamping down” going on out there in response to Columbine, although it’s usually directed at students who look and dress a certain way or are perceived to be “loners.”

But then, a few months later, MSNBC’s Joe Scarborough – an Aspergers parent himself! – had this to say about the tragic movie theater shooting in Colorado:

As soon as I hear about this shooting, I knew who it was. I knew it was a young, white male, probably from an affluent neighborhood, disconnected from society — it happens time and time again. Most of it has to do with mental health; you have these people that are somewhere, I believe, on the autism scale…I don't know if that's the case here, but it happens more often than not. People that can walk around in society, they can function on college campuses — they can even excel on college campuses — but are socially disconnected.

After catching all hell for those remarks, Scarborough clarified:

My call for increased funding and awareness for Autism and other mental health conditions was meant to support the efforts of those who work every day to improve the lives of Americans impacted. Those suggesting that I was linking all violent behavior to Autism missed my larger point and overlooked the fact that I have a wonderful, loving son with Aspergers.

As an Aspergers parent, I have to admit I’m inclined to give Scarborough the benefit of the doubt here… sort of. I mean, I get it. Our kids are different, our kids do have special needs, but they blend in well enough sometimes that schools tend to forget that. And when you ignore those special needs, well, you do so at your own peril (and the child’s). I’ve made that argument to teachers and principals myself time and again.

The problem here is that the line Scarborough’s walking is way too fine, especially in front of a cable news audience that’s just chomping at the bit to find the latest trench coat or Rammstein to blame for this tragedy. This is not exactly a sympathetic audience, certainly not one that’s willing or able to see nuance. Even here in Seattle, one of the more tolerant communities you’re going to find, we’ve encountered a fair amount of ignorance and even discrimination. For Zod’s sake, Scarborough, don’t give them a reason to be afraid of us.

A report from the UCLA Center for Civil Rights Remedies at the Civil Rights Project focusing on nationwide suspensions in the 2009-10 school year seems to confirm what many of us already suspected: 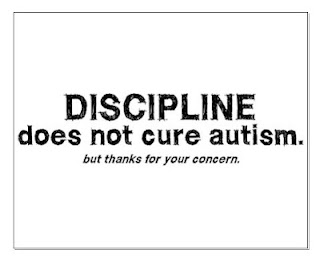 I’m not sure which is easier: Changing the underlying cultural perceptions that lead to such disparities, or changing my son’s Aspergian behaviors that are at risk of being misunderstood and punished. Who’s the more flexible, really? Adults mired in decades of prejudice and cable-news-inspired panic? Or an 8-year-old boy with Aspergers?

I will absolutely continue to do whatever I can to raise awareness and empathy, to challenge misperceptions and fears. But in the meantime, I want The Boy to be accepted and safe. And I want him to learn the complex and mysterious language of social skills that can help make that happen.

So I’ve been talking to him about it. Explaining how he’s so strong now, so much bigger. Making sure he knows that staying calm and using those tools and coping skills is more important than ever. People are going to be less forgiving the older he gets. That’s just how it goes.

When he came to give me a hug tonight, I watched him slow himself down and approach with caution, determined not to mow me down this time no matter how counterintuitive it felt. He was all the way in my lap before he shot out his arms and gripped tight with tiger intensity. I hugged back and told him how happy I was that he didn’t knock me over this time.

I just found your blog and want to say thank you! What an enjoyable time looking through so many sites. Thanks for sharing and keep up the good work till the end.
lawyer web design