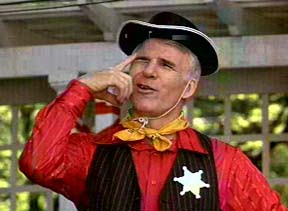 So here’s a new exercise in geekery: Lately I’ve been watching the TV show Parenthood pretty much just for the Max scenes. Let’s face it – I’m practically waving a “Max” pennant when I watch that show. It’s just so oddly comforting to see glimmers of my real life on TV, and a kid like mine portrayed with frankness and empathy.

So comforting, in fact, that I can almost look past the Hollywood blondie-ness of the mom, or the fact that she can win back Max’s friend who dropped him by inviting the kid over for a therapist-supervised playdate (while she and the reluctant other mom have wine).

At least that’s better than Mary Steenburgen’s mom character in the original 1989 Parenthood. Now there’s a mother for you. She drifts through that whole movie, beatific smile on her face, barely ruffled by the chaos and confusion around her. She loves her kids, but you hardly see her actually interact with them.

Steve Martin’s the one who gets puked on. He’s the one who grapples with doubt, fear, helplessness, ambiguity about the joys of his own children, and downright disappointment in his troubled son. Give him a red dye job and some glasses and I am Steve Martin in that movie. And Cowboy Dan is coming. He’s coming.

My heart is a little on the broken side today. Like…teenage-first-unrequited-love broken. It’s making me want to listen to Suzanne Vega’s “Cracking” for the first time in 20+ years, that’s how broken. And, just like getting over that first teenage heartbreak, I’ll get over this too. I’ll develop a schema for it. Grow stronger and more savvy. Cynical.

He was just the nicest guy. Nice as could be. Empathetic, well-spoken, polite, willing to listen. Nothing like that preschool dad who yelled at me and my son on the playground two years ago. Nothing like the judgmental types you run into on parenting message boards. Just a nice, ordinary guy who’s worried about letting his son be friends with my son. He just kind of needs someone to reassure him, that’s all. He means well and I wish him only the best.

It was just a little surprising, is all. I was beginning to think I’d lost my ability to cry. I guess not.

Is this what Steve-Martin-in-Parenthood would do? Seems to me there ought to be a little more comic mayhem involved. Or comic ranting. Something. But this is real life. The leader of The Boy’s social skills group won’t be coming over to facilitate any playdates. And it won’t be like the movie, when Kevin saves the day at the Little League game and gains such confidence that he can later joke about being in therapy. Cowboy Dan? Might not be coming after all.

Still…it’s only first grade. Might as well pace ourselves and try to keep things in perspective.

These disappointing little episodes happen against a background of such joy. There are plenty of other friends in The Boy’s life, and a world of Legos and family trips and library books. School is going a lot more smoothly now. As far as I can tell, he’s blissfully unaware of the behind-the-scenes parenting nonsense that preoccupies us grown-ups so. Tomorrow we’ll work on our valentines and maybe go out for a big family Pre-Valentines-Day lunch. And so it goes.
Posted by Floor Pie at 2:35 AM

Love reading your blog. The Boy is lucky to have you as his mom!

I've just joined your blog, and am looking forward to reading your creative thoughts.
I've just begun blogging, and have begun reading various blogs related to young children, and I think I'll enjoy what you have to say.
Thanks for your blog.
Brenda