An Epilogue of Sorts 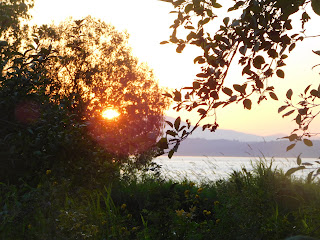 After my last entry, we went back to school in person that April in 2021, just barely vaccinated and overextending ourselves into all kinds of shapes to serve a "hybrid" model...I'm usually so clear on details but I think I've intentionally forgotten as much about it as I could. It was hard, but at the time I kept joking "It's only for three months. I can do any kind of shit show for three months." And I did. And it was. And now that unique corner of my life is done.

In the midst of all that vaguely-remembered circus, our school was told we had to displace one teacher from every department, including special ed. So I volunteered to be the one displaced from special ed. And someday I guess I'll write in more detail about how hard it was to give up on that particular dream of that particular school, but how it was absolutely the right move to make and how I feel like I can simply breathe again at the new school where I landed. I'm back in an elementary school at last, in a resource room, in a leadership position, and suddenly it just feels like a tough-but-fun job that I'm really good at instead of anything more epic than that.

I have worked for Seattle Public Schools for ten years now, and I've been writing this blog in some form or another since 2008, when message boards (and blogs, for that matter) were still a thing. I started it as a way to stay connected with the younger self I'd been, to reflect and tell my stories. It became a space for me to sort of figure out my present and future, too...sorting out parenthood, connecting with other parents and teachers, puzzling and pondering the state of the world, finding old friends, fumbling my way into advocacy and ultimately back to teaching. Which...like I mentioned at the start of this paragraph, I've now been doing for 10 years somehow.

I started this blog kind of marveling that I'd somehow stumbled into a "mainstream" lifestyle of which I'd never quite felt entirely worthy and couldn't quite place myself within. As I wrote, year by year, I gradually found my footing, and it all just kind of flowed along through thick and thin, from H1N1 to Covid-19, from kindergarten to college. Oh yes. College. My kids are 18 and 15 now, joyful and quirky as ever, and entirely themselves. Mr. Black and I are still married and happy, just a few years shy of donning our matching tracksuits for the next phase of empty-nester couplehood.

This isn't an ending. But in a lot of ways it feels like the end of the particular narrative I was telling in this space. So I'll think of this final entry as an epilogue of sorts. Felt weird just leaving it here with no closure. So, you know. There it is. Closure. Until the next chapter emerges and comes into focus.