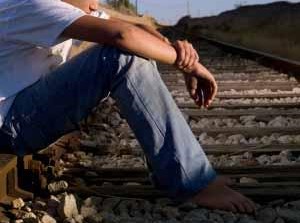 A kid goes off the rails, everybody loses their damn minds, but no one really knows what to do. I’m relatively new to the profession, but I’ve seen it too many times. Different schools, different kids, different adults. But it’s the same no matter what. Everyone’s baggage comes in and drives about 90% of it. No one wants to get too involved even though everybody’s got a damn strong opinion.

Some simply want it punished and shamed out of the kid…or punished and shamed out of the parents. Some want things to change that are too late to change even if we could. Some don’t care what you do as long as it stays out of their backyard. Some have a long list of people and systems to blame but absolutely no ideas about real ways to go forward from here. Some of the people you think are helping you are helping you right off a cliff – maybe not intentionally, but still, that’s the effect. And secretly, cynically, everyone agrees that the kid is on the trajectory he’s on no matter what we do; that we’re basically human duct tape at best and at worst.

Yesterday I was the target of nothing but a killer migraine that I’d been holding at bay all week. Finally overtook me on Friday, the day the kid finally came back to school only to hide in the bushes, half-heartedly throw a few rocks in the general direction of another student, hide in a bathroom, and curse loudly in the classroom of the teacher who particularly hates cursing in her classroom. Am I suspended now? Can I be suspended now? How about now?

I held the pain and nausea and disequilibrium in a small closet behind my left eye, kept my classroom cool and dark and kept my voice low and calm as we talked through the behavior contract again and he tried not to cry, handed me his phone without looking at me, agreed to the assistant principal’s terms before darting off to lunch.

And then I could finally go, finally go while I was still functional enough to drive, drive myself home to a mercifully empty house, a long, hot shower, and hours upon hours of blissfully medicated sleep.

Waking up many hours later, everything is right where I left it. Q4 progress report assessments to score. Meetings to prepare for. Emails to answer. Worries and resentments to put to rest because what the hell is the point of having any feelings about any of this? It’s not personal. This is our business; managing and processing children and their educations and their behaviors, free and appropriate and public, a great post office or DMV of human experience.

“You’ll be a teacher they remember,” my mentor said. “You’ll be someone who was kind to them, someone who tried.” He doesn’t say, but clearly implies “But don’t think you’re going to change much of anything.”

Can this be enough? I think, at least for now, that this has to be enough. I’m tired and embarrassed and a bit disillusioned. But I’m not sorry. And I’m not ready to give up.
Posted by Floor Pie at 7:13 AM

I am so proud to know you, because you are awesome.

I refuse to believe that it makes no difference. Perhaps it makes no difference TODAY or even in the time you know the student, but it DOES make a difference long-term. Everyone grows up and takes with them the good and the bad, the beautiful and the ugly from their childhoods. You are bringing as much good and beautiful as you can to the process and that is never a waste. When I was in my twenties I mentored a kid in group foster care. He came from as f-ed up a background as you could imagine. At the group home they had cameras in his room to monitor him and no one held out much hope for a bright future. Ten years later he came back to visit and he made a point of apologizing to one of his main house parents saying, "I was a real a-hole to everyone here." I don't know much else about his life, but the friend he apologized to said that no kid has ever done that before and it gave him hope, it made him think that perhaps a difference had been made in spite of all evidence to the contrary at the time. I believe that is always the case. You ARE making a difference even in spite of all evidence to the contrary.