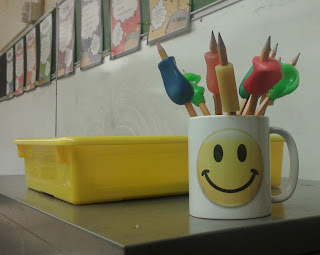 Just about every night during this winter break, I’ve had an absurd but shockingly realistic dream that I was failing and failing hard with my students; barely understanding what my administrators wanted, barely understanding the subject matter I was supposed to teach, grasping desperately to make myself into a human bridge across the gap of what my students really need and the stark reality of resources and logistics. At least I think it was a dream.

2015 was quite the debut into the world of teaching special education. I’d been hoping – cockily expecting, actually – that I’d be snapped up in the spring by elementary schools all across the District. What happened instead was that I was randomly assigned to a high school at the beginning of summer. I turned that job down, but a human resources person persuaded me to seek my fortune in middle school instead of elementary. I was hired in July.

And then what happened? Let’s see… 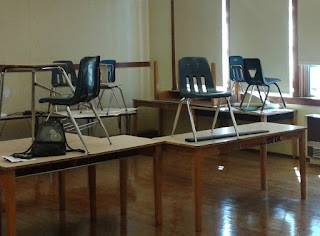 August – I tried to move into my very own portable classroom that I’d been assigned. This proved more challenging than one would expect, as the part-time person currently inhabiting that classroom refused to vacate, eventually quitting in protest. Not a very warm welcome, but it could not quell my excitement as I diligently studied my caseload and shopped for a mini-fridge and water dispenser.

September – We went on strike, during which time my anxiety hit an all-time spike. Imagine climbing to the top of the highest high dive and then, instead of diving into the pool, you just have to stand there shivering. And holding a picket sign. 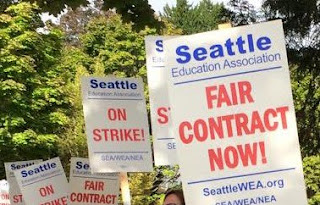 By the time school started again, all my joy and confidence had been replaced by terror and self-doubt. But I dove and scrambled and found my mojo again, pulling up and pulling off some real successes, soaring on a genuinely strong rapport with my students and colleagues.

Also, the water dispenser broke. Those 7th graders are thirsty.

October – As part of District-wide staffing adjustments, my school was required to displace two special ed teachers to other understaffed schools in Seattle. As the least senior teacher, I knew it would be me. But it was several weeks before I knew when my actual last day would be, or where I’d be going next. I said goodbye to my students and loaded the mini-fridge and broken water dispenser into my car. Eventually, I landed at a new middle school with an actual classroom in the actual building with a beautiful view of the snow-capped Olympic mountains and Puget Sound. My very first day of work was also Pajama Day, which I took to be a good omen. 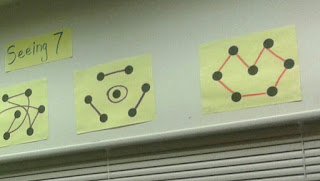 November – My new school was also one of the lucky ones chosen to be audited by the State of Washington. That…is a story for another time. Meanwhile, I scrambled to learn my new caseload, build strong and trusting relationships with my new students and colleagues, and plan all new trajectories of instruction.

December – I had some truly incredible moments of being exactly the kind of teacher and case manager I want to be. And a few more moments of locking the door and crying at my desk. The volume of work is staggering, the logistics nearly impossible, and the needs in front of me are constant and intense. Sometimes I’ll be teaching and I can physically feel them slipping away, drifting and sinking fast, so far beyond my reach. Other times…and those times are much, much fewer and farther between…they’re with me.

At job interviews they always ask you “How do you know if your students are learning,” and you’re supposed to say “Progress monitoring, CBMs, baseline assessments, spreadsheets, blah blah blah.” But I swear, I can tell that they’re learning from their eyes and shoulders. Something opens. They get lighter somehow. They’re in motion. And just like anything else to do with childhood, it doesn’t happen in tidy little 50-minute increments. It comes in fits and starts, weeks and weeks of nothing and then a BLAST into the stratosphere, followed by weeks and weeks of more nothing.

But, because I am still accountable to administrators, I do attempt to quantify their learning with progress monitoring assessments. Right before break, I had a stack of them sitting in my inbox for two days. I was terrified to score them, fearing that my hopes would be dashed, fearing that I wouldn’t see in the numbers what I’d been seeing in my students’ eyes during the past few weeks of our fractions lessons. I knew they were learning. I just knew. What would I do if those numbers told me otherwise?

Finally, with the long, luxurious days of winter break dwindling, I dug them out of my long-neglected tote bag full of work I’d brought home and sat down to score them. And let me just say…their quantifiable progress is astounding. Astounding! One dude went from 0/25 to freaking 22/25. I may have actually squealed with joy. I may have teared up a little.

I’m not failing. There are days when it feels like I am, every minute. But I’m not. I simply know that I am not. 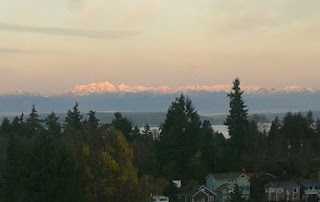 January – I don’t usually make my New Year’s resolutions public. But these are so important, and so likely to get lost in the wild current of first-year-teaching when school starts again, that I feel I need witnesses to them.

In 2016 there will be Right Action without outraged self-righteousness or crippling fear or self-punishing work ethic. Simply go forth and do right, with plain kindness and gentle detachment.