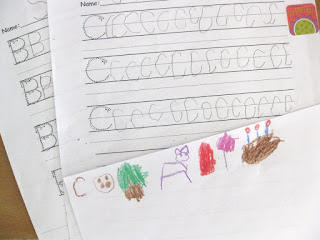 Little Grrl’s old preschool had a stairway to nowhere, propped against a wall in the church courtyard. When she was three years old, her favorite thing to do during outdoor playtime was to simply climb to the top of it and stand there, perched like a cat, taking it all in.

When the preschool relocated to a bigger space the following year, she opted for the new swing set. Always the same swing, in constant motion, safe and soaring. 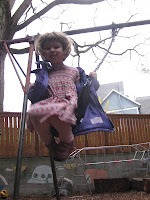 This year, on the second day of kindergarten, I walked her and her brother to school. The Boy raced off to find his friends on the crowded playground. To my utter amazement, Little Grrl ran off, too. “Look what I can do!” she called as she ran past the play structure to the small staircase that leads directly to her kindergarten classroom. There, she climbed to the top of the wide brick railing and stationed herself at the top. Above the fray. Again. This is how she finds comfort in a new space.

I meant to bring a camera with me the next day to get a picture of it. Instead, I found myself taking those first tentative steps down the hallway of a whole new school on the other side of town. My first assignment as a special education parapro sub. Yes, I’ve gone back to school too.

Mr. Black does pick-up and drop-off now, thanks to a generous flex-time arrangement from his job. He had his first “teacher pulls you aside” moment the other day. Oh how I used to dread those, especially in the pre-IEP days when most of them thought The Boy’s Aspergian behavior was simply a discipline problem. But wouldn’t you know it, the teacher only wanted to tell Mr. Black what a great job The Boy is doing this year. Fathers have all the fun. Oh well.

I have a recurring moment every afternoon, usually when I’m waiting at the light at Stone Way, almost home. It feels like I’ve somehow stepped into another body or jumped forward in time or some other science fictiony scenario. All of a sudden, here I am coming home from my job that I get paid to do. Just like that. When I realize I’m about to see my own kids, my heart absolutely leaps. That seven-hour separation somehow makes them absolutely golden to me in that moment.

Some days they stampede to the door and nearly knock me over with reunited joy. Lately, though, it’s more likely to find only Mr. Black at his desk, finishing up the day’s work while the kids do homework, read, or draw in their rooms.

I flop down on the couch while Little Grrl brings me armloads of worksheets and drawings, regaling me with all the latest kindergarten tales. The Boy makes an appearance to let me know his stats for the day – how many lines he wrote in his journal, how many minutes he ran in P.E. class, what percentage of his homework is finished, the number and title of the Simpsons episode he wants to watch later. Sometimes he even asks me about my day. (“Did you get promoted? Did you get fired?”)

There are elements of a Happily Ever After here. This career just might be The One. Of course, there are elements of a 1980’s training montage here too. It’s not an easy job, and it’s clear that I still have a lot to learn. But my instincts are sharp, I’m learning quickly, and somehow I’m able to let the setbacks roll off my back and stay focused on the matter at hand. I flow with this work in a way that I’ve never really experienced before. And for the first time in my life, I get it. I get how a career can be more than just making a living.

Sometimes I wonder why I didn’t just do this in the first place. Those early months when I first moved to Seattle, dragging my graphic design portfolio on bus after bus to interview after interview. All those migraines, deadlines, fluorescent lighting, and micromanagement. Why did I stay in an unfulfilling corporate career all those years when I could have been doing this instead?

I learned it in their classrooms, in the parenting classes offered by their preschool, in the books upon books I read trying to figure out how to parent a child with Aspergers. I learned it from the talented and dedicated teachers, parents, and professionals who are a part of our village. I learned it from trying and failing and trying again. Don’t tell the Mommy Wars people, but it looks like being a stay-at-home mom was the best career training I could have hoped for.

And now, here we are. Not quite an ending, not quite a beginning, but we’ve definitely taken a new and irreversible turn on this path. The baby days are long gone, the stay-at-home mom years are fading fast, and there are many more years of trying and failing and trying again as this new “career” phase of my life ever so gradually takes shape. Onward. 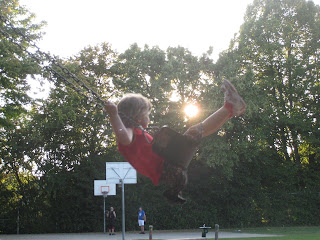 The kids and teachers you work with are very fortunate because, You Get It.

I have search your site from bing, its very up to dated and a good soucrce of information.i am Cloisonne pins Maker