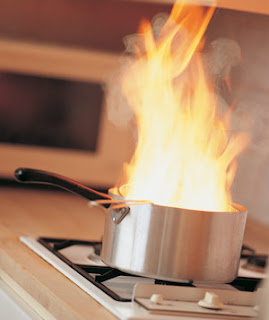 I poured my carrot juice a little too fast at breakfast, and the flash of orange triggered a split second of memory and panic. I know this kind of thing is supposed to make you seize the day and hold your babies tight in breathless gratitude. But this morning, all I wanted to say was “Dear kids: Mommy almost burned her face off last night. Please cut the bullshit.”

I didn’t say it, of course. There were pink (NOT ORANGE!) vitamins and half a bagel with cream cheese (NOT TOASTED!) for Little Girl, and a frozen waffle (toasted! no, cold! no, toasted! no, cold!) for The Boy. Making the eggs was the biggest challenge, of course, returning to the scene of last night’s New Year’s Eve grease fire. And so we meet again, Mr. Stove.

I’d been trying to make popcorn for the kids’ movie night while talking on the phone with my mom. When I saw smoke pouring out of the pot, I stupidly took the lid off and then, even more stupidly, tried to extinguish the flames with a big cup of water (that also happened to have a sponge in it), making the flames flare up dramatically. When I started to move the pot off the hot burner, the flames shot nearly two feet in the air, in the general direction of my face.

Mr. Black came in and put the fire out as quickly as it began. The Boy was in the living room, high-pitched and panicking until we reassured him that the fire was out. But there would be no popcorn tonight. That was the last straw for Little Girl, who burst into tears and kept on crying.

What the hell just happened here? I saw the sad old blackened pot, abandoned in the backyard. My breath felt smoky and my face hurt. Mr. Black was standing on a chair, scrubbing smoke stains off the kitchen cabinets. I noticed a huge burn on my wrist, and my right eyelid felt like it was burning, too. Wait a minute, I thought. Didn’t flames just shoot at my face? Perhaps I should seek medical attention.

No waiting at the ER. You want speedy service, just have a seat at the check-in window and tell them you’ve been in a kitchen fire. There was a young, fresh-faced doctor, followed by his supervisor – an older gentleman, kind and jolly, dressed in a tux to make the most of having to work on New Year’s Eve.

“Was it smoke?” he asked, examining the burns on my face.

“Flames,” I said, and he looked at me with worry and surprise. “I was lucky,” I added. He nodded solemnly.

I had to wait for an eye exam, and wait some more while they consulted with the burn center at another hospital. And the longer I waited, the more the reality of the situation set in. This could have been a lot worse. Really, it was miraculous that it wasn’t a lot worse.

I felt a perfunctory impulse – almost an obligation, really – to thank God, or G-d, or the Universe, or Jesus, or Santa, or the spirits of my ancestors. Somebody. But the gratitude felt hollow. To believe that some divine force of good intervened to save me from my own stupidity, from an accident that I caused, is to believe that I am somehow more worthy of being saved than the next unfortunate accident-prone mother of two. And how can I believe that? What does that say about the person who isn’t so lucky? What sort of false hope does that provide? How will you comfort yourself when that benevolent intervention doesn’t happen?

The chilling fact of the matter is that this simply happened. I made a mistake. I started a fire. The flames burned just high enough to burn my face a little with their heat, and that was all. It could have had a different outcome. But it simply didn’t.

And so, I join the ranks of all the other New Year’s Eve survivors of bad choices – the DIY fireworks injuries, the drunken tumbles down the stairs, all manner of accidents that shouldn’t have been. And I go back to my life very much as before, hair and eyesight intact, living to kvetch and ponder another day. Lucky.

And yet…There’s a part of me that still very much wants to believe that I am a loved and treasured child of a universe that knows I’m here and wants me to stay. Whether it’s objectively true or not (and really, no one can know for sure), it’s a belief that can make all the difference in how happy you are to get up every morning and face the day’s fears and frustrations. It’s a belief that got me through some of the most challenging times of my life. It’s a belief that just might make it possible for me to sleep better tonight, and maybe cook again without anxiety. It doesn’t hold up to scrutiny or logic. But I think, for the time being, I just might hold it in the back of my mind anyway.