More Than a Shark Jump 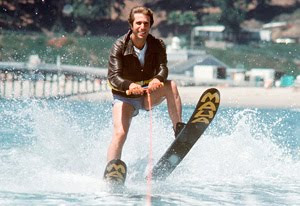 I’ve been into Happy Days lately. Like, really into Happy Days, far beyond typical Comfort TV indulgences. I skip The Daily Show so I can catch bad Season 9 reruns on The Hub. I seek out those cringe-inducing musical numbers on YouTube. I pore over the episode guide on Wikipedia, trying to get the series narrative straight. Somehow it’s become hugely important to learn things like: How many episodes featured Suzi Quatro’s Leather Tuscadero, and was I in 3rd or 4th grade when they aired?

What can I say? I’m a midlife-crisis-bound Gen X girl, and Happy Days is my Rosebud. 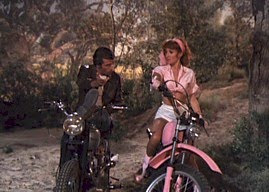 There wasn’t a lot of TV in our house when I was a kid. Maybe my sisters and I watched the occasional Mary Tyler Moore or Rhoda with our mom. But that ABC Tuesday night line-up was all ours – our first childhood foray into prime time “appointment television.” And when The Fonz jumped that shark, we were on the edge of our freakin’ seats. Cynicism would come later.

We loved Fonzie’s folk heroism, the delightfully predictable jokes and catchphrases, the comic mayhem. We loved the 70’s girl power of Pinky and Leather (and occasionally Joanie and Marion). We loved that the show let us identify with teenagers – they’re like grown-ups, but they’re still kids! They went on dates. They had wacky adventures. They helped their local restaurant owners out of jams. It was everything a child might wish for her teenage future: adventure within the safe status quo, all under the guidance of a nurturing-yet-hilarious support system.

Ironic, then, that the real “shark jump” of the show (not The Fonz’s literal water-ski jump over the shark, but when the quality went downhill) coincided with the onset of my actual adolescence. Just as I was realizing that tweenhood isn’t all it’s cracked up to be, Happy Days’ representation of teenhood started flat out sucking. Recycled plots, or downright improbable ones. Everything seemed a little less full; a little more contrived. And Joanie’s 1980’s good-girl perm looked as awkward on her as it did on me. So disappointing.

Maybe by age 10 or 11 I was simply becoming a more sophisticated viewer. But I think the show was taking a pretty serious nosedive by anyone’s standards. I mean, come on…Richie leaves and his cousin Roger moves in? But Lori Beth keeps hanging around, eventually marrying Richie in by proxy? And then Joanie leaves and her cousin moves in? Really?

It was like the loss of childhood innocence itself. The stuff we used to take at face value now seemed absurd and suspect. The circus, Disney movies, even our beloved Jersey Shore – nothing amazed and delighted quite like it used to. Though I didn’t have the words for it at the time, I remember having a distinct sense that my life would never be quite as simple and joyful as it was when I was a little girl. And so it was with Happy Days.

The one bright light in all of this, of course, was our generation’s Bella and Edward: 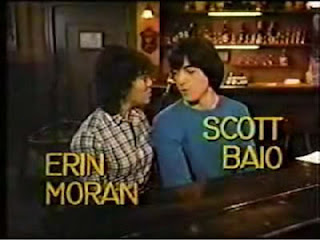 Now there’s an area where I was still willing to suspend disbelief! So much was wrong for me in 7th grade. But the notion of Joanie and Chachi, with those intoxicating gazes into each other’s eyes…somehow it just lifted me up.

It wasn’t about Scott Baio. Maybe I’m the only one, but I never had a crush on the guy. (And you know I’d tell you if I did!) No, I was just deeply intrigued that such captivation with another person was possible…that one could adore that much and simply be adored back. It was a glimpse of intense romantic love, wrapped in the safe context of a prime time parent-approved family sitcom.

And that’s all fine for a 12-year-old girl in the early 80’s. I just wonder why I’ve been so intent on reconnecting with these shows now? Why all the late-season Happy Days and Joanie Loves Chachi? Why the nostalgia for the unhappy chapters in my girlhood and the lame TV shows that got me through it?

Maybe that’s the answer right there. 41 is the new 12. Once again, I’m facing a transition of sorts. Not only are the carefree 20’s long gone, but so are the 30’s – my years of early marriage, early parenthood, and the novelty of “Hey, I’m mainstream now! But I’m still cool. Check me out, blaring my Sleater-Kinney on the way to the pediatrician’s office.”

Sure, there’s still plenty of joy to be had. But none of this will ever be new again. The challenges just keep on coming, and they’re only going to get bigger. In the midst of this tough year we’re having, it’s downright comforting to remember how similarly stark my tweenhood was…and how I managed to hold it together and find little joys and comforts throughout.

My sudden fascination with Happy Days is more than just pop culture geekery. It’s about reacquainting myself with my childhood innocence, and how I stayed strong through the loss of it. 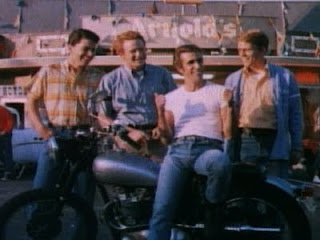 Love it as always! When Reilly was a baby I developed a similar obsession with That 70's Show (for similar reasons I'd say...). Enjoy!

Aaay! You're The Fonz, Floor Pie.

Unlike you, I really can't watch this show any more. It was always pretty bad, I think, not even in the same league as MTM or Rhoda, but yeah, you're right there's a lot of good nostalgia in this nostalgia show. It is a kind of touchstone for a generation.

I remember asking my mom if there had been any guys like The Fonz in her high school. All she could answer was, "That guy's a really bad actor."

This and your other blog post makes it seem from my point of view that you are looking to the past for comfort and answers.

For me, the show that not only was entertainment but also provided a value structure really was All in the Family. But I'm a touch older than you.

I never got the 50s. Even in the 70s we were watching something that never existed.

Thanks for your thoughts.