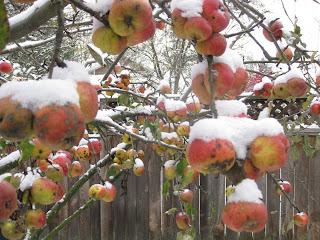 Somehow, without even trying or even necessarily wanting to, the Floor Pie family appears to have mastered the “staycation.”

I’m as surprised as you are.

When the snow started falling on Monday morning I was just the littlest bit irritated, even as Impy and Chimpy joyfully scrambled into their puffy coats. For all my do-whatcha-feel quirkiness I’m actually a rather linear thinker, easily ruffled when plans go awry. We had a Thanksgiving trip to Oregon to prepare for, co-op preschool classes to attend, plates to spin.

But snow in Seattle is a rare occurrence indeed. Between our city’s apparent lack of snow plows and a landscape of crazy-steep hills and floating bridges, we tend to shut down pretty easily. As it turned out, the only thing that wasn’t cancelled that first snow day was my parent-teacher conference at The Boy’s elementary school. Afterwards, with Mr. Black home with both kids, I walked down to my favorite coffee house in that neighborhood and just sat, warming my hands on a pumpkin spice white mocha and watching the snowflakes swirling around.

It didn’t matter that I was only a few blocks from my kid’s school and a short drive from home. It didn’t matter that dozens of loose ends and unanswered questions lay in my mental inbox. For the moment I was deliciously alone, anonymous, with all the time in the world.

You’d think that feeling would disappear the minute I had to haul myself home in the now-heavier snow. But it didn’t! I walked in the door to find Mr. Black on the computer and the kids immersed in some game in the playroom. After a minute or two, I actually picked up the library book I’d been saving for our trip and curled up by the window to read. (To read! A grown-up book! During the day!)

We passed the hours with all the whimsical luxury of a family renting a quaint cottage in some vacation town, easily changing companions every few hours for a new set of amusements. The Boy and I walked up to the hardware store to buy birdseed. Little Girl and I read stories while The Boy catapulted shovels full of snow in the backyard. The Boy and Mr. Black played Civilization. Mr. Black and Little Girl played Bird Bingo. The four of us walked up to Kidd Valley for lunch. The only thing missing was an exotic landscape…although an all-day snowfall that doesn’t melt the next day is exotic enough in these parts.

Snow day after snow day, I expected the cabin fever to set it. We did have some isolated flare-ups – not unlike the sort you have when traveling with your family. But for the most part, that luxurious vacationy mood remained. Even now, the night before Thanksgiving, there’s still a delicious sense of laziness in the air.

When we’re trying to pack the car tomorrow I might be cursing the loss of my usual pre-Oregon-trip bustling. But I’m hoping that, instead, all this blissed-out laziness has somehow brought me closer to some True Meaning of Thanksgiving sentiment (I’m thankful for family!). Or at least some anti-holiday-stress sentiment (I’m thankful for having avoided the mall this week!).

Whether the feeling lasts or not, it’s just really, really nice to feel this relaxed when we’re this close to the holiday of 1-5 traffic and pie fails. It’s such a rare time of year for living in the present. More than anything, I’m grateful for that.
Posted by Floor Pie at 10:30 PM

I think this is what happens when the kids "grow up." Thanksgiving Day we hung out all day, playing games and making food - no one fought, no one complained, no one asked for TV time! It felt like a Thanksgiving miracle. Here's to more days like these - always love reading your blog!