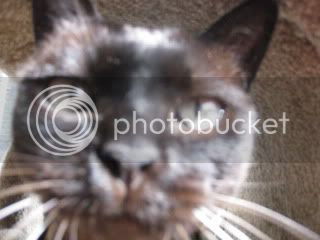 Oh, you knew there was a cat! How could there not be a cat? Mia’s been with me since the carefree Philly single days, and she turns 15 on Friday. (That’s right, I know my cat’s actual birthday.)

Anyway, I thought a few words might be in order to honor the little Brown-Brown. We’ve been through a lot together, we two. I was in my twenties when we joined forces, still relatively new in town, all underemployed and lonely, sharing a 20th-floor apartment with my sister. Getting a cat seemed like the next logical step.

And maybe it was a coincidence, but somehow my life took a dramatic turn for the better when Kitten Mia moved into that apartment. Sure, I still had my crazy-lady boss and disappointing attempts at dating. But now I also had this furry little anchor of sorts, always there to stick her paw up my nose to wake me up in the morning. Even sitting around watching “Dr. Katz” felt more exhilarating somehow with a kitten leaping all over the apartment or purring on my shoulder. She made it feel like home.

My sisters and I anthropomorphized the hell out of her, of course. She was more Beezus than Ramona, we decided; a bookworm and a student of science. Even the vet joined in, claiming that if Mia were on “Friends,” she’d be Monica. At some point we imagined she preferred Celine Dion to our music. And she had a red gun like Agent 99 on “Get Smart.” You know . . . to scare away the dogs.

As the year went on, my job got better and my social life started picking up. That summer my sister moved to DC and Mia and I moved to a new apartment on Antique Row. We had the whole second floor to ourselves, complete with wall-to-wall shag carpeting and lots of windows for her to chatter at the squirrels and stalk passing busses. Best of all, there were real mice! All we ever had at the old place was the occasional cockroach or centipede. But this place had a steady supply of mice for Mia to chase and – occasionally – catch, wound, and release to die in the walls somewhere. Good times.

Mr. Black showed up about a year later. Mia was no fan of his at first, but eventually he won her over with his ability to open a can of cat food. Next thing you know, we were moving to Seattle. I got on that plane with just three suitcases, a purse, and one very confused little Mia in her Sherpa bag (which fit neatly under the seat in front of me). Other than some frantic digging when the plane first took off, she traveled pretty well.

Everything kind of blends together after that. There was another apartment for a few years, and then the house we live in now. There were bad jobs and good jobs, some neighborhood riots, an earthquake, a wedding, and lots of lazy days in between. There were babies, which Mia has recently forgiven me for bringing into her home. She’s even come to grudgingly enjoy the little man-cubs: 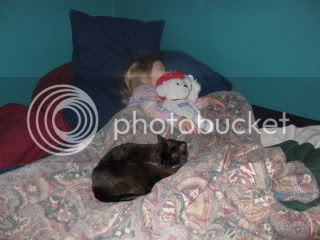 And now the old girl’s about to turn 15. Which seems so old, but at the same time it kind of fits. She’s been with me for practically my whole adulthood – through all those friends and boyfriends coming and going, through all my different hair-colors and glasses frames, from cuddling with me after a bad date to cuddling with me after the kids are finally asleep. She was the first member to join this little nuclear family of mine. She’s seen it all.

Aaand now she’s squawking at me to turn on the bathroom faucet so she can have a drink. I guess that’s as good a place as any to conclude. 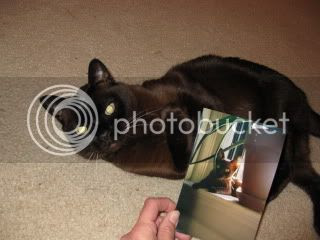