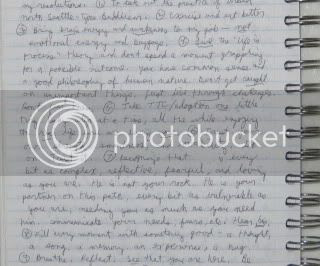 I started making New Year’s resolutions about 15 years ago – the first time in my life when the calendar, and not the school year, marked a new beginning. I’d been living in Philadelphia for a few months, friendless and floundering around in various temp jobs, trying to get my feet on the ground. And just in case that wasn’t enough, I was also recovering from my second surgery to remove some big fat ovarian cysts.

“If you were married, I’d tell you to have your kids now,” my (male) doctor had said. Peachy. I didn’t even know if I wanted kids in those days, and being married seemed about as likely as taking flight. I’d had some casual boyfriends that year, all of whom would have left a boyfriend-shaped hole in the wall if I’d mentioned marriage, kids, or ovaries to them. I didn’t know what I wanted, exactly, but I knew things had to get better than this.

So I sat down at the kitchen table and wrote my first-ever list of resolutions. Some of them read like Stuart Smalley’s “Daily Affirmations” (“Find the potential for joy in each day”); some of them were practical and frank (“Know there are always alternatives. Do not marry or even couple out of desperation”). Cheesy or not, it was exactly what I needed to hear at the time, and writing the words myself somehow felt more powerful than reading them on a kitten poster or even hearing them from a friend over coffee. Scribbling away at my table, I was feeling more hopeful already.

And thus, a single-girl tradition was born. Not every year was as bleak as that first one, but every year had its own brand of absurdity and bad dates and pathos. There were jobs that drove me crazy. There were friends who were mostly just passing through. There were boyfriends I loved way too much, and boyfriends I wished I’d loved more (and plenty of unrequited crushes in between). My life was such a work-in-progress in those days, beginning a new year at Point A with very little idea where I’d be by the end. Each year required a fresh batch of strength and survival skills.

So, I’d make resolutions. They were mostly your basic “push out the jive, bring in the love” rhetoric with little variation from year to year. I’d resolve to stay healthy and be strong; to bring more energy and enthusiasm to my job; not to worry and hurt so easily; to seize the day. Some years I included more ambitious resolutions about branching out into the community (find a hiking group, a book club, etc). Funny how those were the ones I rarely kept.

One notable change is how, after a few years of solid self-focus, the resolutions expanded to include other people. One year, for example, I resolved to be a better friend to the important people in my life. Another year, I resolved to keep working on adult friendships with my family. And since Mr. Black came along, there’s always been a resolution to give him my full appreciation.

Yes, the single-girl tradition survived couplehood. Well, pretty much. Our first New Year’s together was right before I moved to Seattle to be with him, so resolutions were a no-brainer. The year after that, though, I didn’t do them at all. We’d been living together for nearly a year by then, and going through a major stretch of growing pains. That’s the thing about long-term relationships. You hit a rough patch and you have to either plow your way through it or retreat. I was journaling a lot during that time, but New Year’s came and went without mention on the pages.

I started doing resolutions again for the next couple of years, but it was more for the sake of the ritual than anything else. We were engaged, and then in the first year of marriage. Aside from some frustrations with my job, I was feeling incredibly happy, lucky, and . . . well . . . resolved, I guess. My world was blissfully smaller, more manageable, and full of easy joy.

And then everything kind of came full circle that next year. I’d had two early miscarriages and was on the verge of a third one as the new year began. It’s funny how all those years of single-girl struggle really laid the foundation for something like that. Losing a pregnancy isn’t really like losing a boyfriend, but the survival skill set is remarkably similar. While it's an actual tangible loss in one sense, it's really about the loss of hopes and dreams; the loss of an ideal. I never thought I'd feel that way again, but there I was. My list of resolutions was as long and affirmationy as it was that first year in Philly. Here are just a few:

1. Trust your own strength, smartness, and lovability. Go on. Trust it.

2. Recognize that Mr. Black is every bit as complex, reflective, fearful, and loving as you are. He is not your rock. He is your partner on this path, every bit as vulnerable as you are, needing you as much as you need him. Communicate your needs, fears, etc. Hear his.

3. Fill every moment with something good – a thought, a song, a memory, an experience, a hug.

4. In short . . . please be happy. Be at peace. You need these challenges in your life, and you can meet them. Someday we will know how this all ends. But we can be happy before we know.

Sure enough, the following year I replaced my New Year’s resolutions with a giant “to do” list to get ready for the new baby. And in the years that followed? If I made any resolutions, I didn’t bother to write them down. I think I had one about doing more yoga one year.

Too busy and active with “real life” for introspection? Or too mired in motherhood minutiae to focus on myself? No, I don’t really see it either way. It’s funny . . .when I was digging up all these old resolutions in the first place, I flipped through a journal from 1995 and then another from 2007 back-to-back. 1995: Analyzing the pros and cons of pursuing a particular guy. 2007: Making lists of everything I ate and how much blood was in the baby’s diapers, trying to track down the culprit (it was dairy).

And I had to ask myself: Are those two preoccupations so different? Relationship woes, diaper contents. Mr. Black says it’s only the difference between metaphorical and literal shit. Crass, but true (although the relationship stuff makes for more interesting reading).

Anyway. It’s all just a big navel gaze, I suppose. But since this is just some chick’s blog and not the front page of CNN.com or anything, I’m hoping you’ll forgive me the indulgence. And who knows, maybe turning all this introspection outward will do some good somehow, shining my little Stuart-Smalleyesque light of wisdom on the Internets. You never know.

So, for 2010 I’m starting up the resolution tradition again. These are a little more succinct than in past years, but they say all they need to say:

2. Be present for my children

4. Be mindful of my body and take good care of it

5. Simply enjoy that life is good right now and do more of the things that help make it good

Or, as they say in Wuzzleburg:

When I got to this line:

" . . . writing the words myself somehow felt more powerful than reading them on a kitten poster . . ."

I startled the dogs by laughing out loud. They're now both standing in the doorway trying to figure out what's wrong with me from a distance.

And this will never be just "some chick's blog."