Well . . . yes, I expect. I mean, it was no 9/11 or 2009 Iranian election. But it’s probably the biggest thing to happen right here in our city, at least since I’ve lived here. Some of us got harassed by police or even sent to jail just for being in the wrong place at the wrong time. The city itself was a punch line for weeks, maybe months afterwards, and is still a one-word cautionary tale to other cities hosting controversial events: “We don’t want another Seattle.” The news media tied it up in a neat little package called “The Battle in Seattle” – that rhymes! (Incidentally, the movie of the same title does a great job retelling the story.)

I remember being very excited about the whole thing in the weeks leading up to it. Everyone knew it was coming. The local papers brought us up to speed on what the World Trade Organization even is and why people were organizing protests in the first place. On our annual Thanksgiving drive home from Oregon, we passed a bunch of Seattle-bound activist hitchhikers. One local news station was running a promo with footage of the pre-meeting protests and a goofy voiceover better suited to a dog food commercial saying “Protests! Traffic! Changes in your bus route! What the oh?!!”

I was tempted to participate in the AFL-CIO’s rally but, in the ultimate irony, I really couldn’t miss a day of work. Mr. Black wasn’t planning to participate either, but some of his fellow law students were donning gas masks and “Legal Observer” t-shirts to jump into the fray. I couldn’t help feeling like I was missing out, driving over the bridge to complacent Kirkland to work on my little magazine layouts while history was being made just a few blocks from our Capitol Hill apartment. 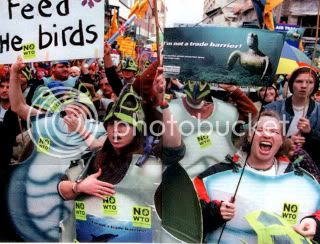 I kept checking the news all day, reading about the marching sea turtles and French dairy farmers handing out raw cheese samples in front of McDonalds. Somehow, the activists had actually managed to shut the WTO opening ceremonies down. A little less amazing and a lot more cynical: some protestors were smashing shop windows and looting downtown. Where was this going?

Mr. Black and I snapped on the news the minute we got home and watched the massive, unmoving crowd facing down police officers downtown. Huge white waves of pepper spray would inch the crowd only slightly backward. Another face-off. Another burst of pepper spray. And another. We watched with near-simultaneous feelings of “Power to the people!” and “Oh shit, here come the people!” Because we could see the direction the police were pushing the crowd: right up the hill, east on Pine Street. Right up the hill to our neighborhood. 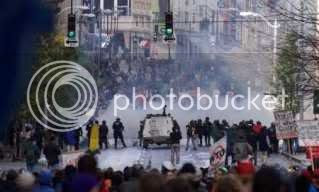 Surely the police would let up before they got that far, we agreed. There was a curfew in effect downtown, but not all the way up in Capitol Hill. I set off for my writing workshop in Eastlake without giving it much further thought.

Driving home just an hour or so later, I realized I’d made a big mistake. Two blocks from our building, a lone specter of a man stood right in the middle of Bellevue Street holding a rag to his nose and mouth, surrounded by a spooky haze. I inched cautiously along the road and found the next block swarming with neighbors and protestors packing the sidewalks in front of the mini-market, laundromat, and apartment buildings.

I parked the car in the little lot behind our building and impulsively hurried down the hill toward the action, ready to shake my rolling pin at somebody. Because, seriously, get the pepper spray out of my neighborhood. We live here. All at once, a misty cloud of hot peppery goodness wafted up the street and hit me in the face. Quick little sneezes came one after the other, followed by an unbearable burning in my eyes and throat. I was livid and wanted to kick the ass of whoever did it, but instead I ran watery-eyed back to our apartment. (Luckily, that news report we’d been watching earlier had told us what to do if you happen to get yourself pepper-sprayed.)

When I’d sufficiently doused my face and the noise outside died down, Mr. Black and I went up to the roof to see what was going on. The neighborhood was now eerily desolate, except for a group of police officers in full riot gear marching in ominous formation down Bellevue Street.

My suburban co-workers wanted to hear all about it the next day, especially the conspiracy-theorist guy who was always hepped up on “coffee.” We were driving to a meeting together and he talked excitedly about it all – how President Clinton was due to arrive that day and that’s why the city cracked down so hard on all the protestors last night. He enthusiastically insisted that Clinton wasn’t really staying at the Westin downtown amid all the chaos; he was probably right here in Kirkland. The words had barely left his mouth when we saw two low-flying helicopters, apparently departing from the nearby big fancy waterfront hotel. The guy nearly peed his pants with tinfoil-hat vindication.

The big boss sent me home early that night to beat the next round of neighborhood riots. Mr. Black and I sat cooped up in the apartment, uneasily watching TV, when we heard helicopters overhead. And lots of angry-crowd sounds. And more helicopters. And . . . gunfire?

The most unsettling thing was that the noise wasn’t coming from downtown or anywhere near the newly imposed “No Protest Zone.” The noise was coming from Broadway, east of our apartment and further up the hill from downtown, well outside the WTO area. Why? More helicopters. More gunfire. More shouting. Explosions. We didn’t dare go outside after my little pepper spray incident the night before, so we kept changing the channel in the hopes of finding a news report. Nothing. Hours later, we found out the gunfire and explosions were actually rubber bullets and concussion grenades fired by police in a riot whose origins are still unclear.

We never did see much about the Capitol Hill riot in the news, but there were lots of first-hand accounts from our neighbors suggesting there’d been nothing unusual going on that night until the police showed up and started sweeping the streets. Matthew Amster-Burton sums it up nicely in his essay:

A police helicopter buzzed overhead, and as we looked down the street, a line of riot cops materialized from out of the gas to look back at us. They were three deep marching up the street, flinging countless canisters and grenades at everybody nearby. A pair of armored personnel carriers pushed through, four cops hanging off each side. . .

[N]ot only was there no evidence of civilian violence, but I didn't see any protesters at all. . . . We watched out the windows as the police parked an armored vehicle on our corner and flanked it with officers. When our neighbors started to gather on the sidewalk across from them, we went back out to join in shouting for the police to leave our home. Ten minutes later, the police pushed back down the street, again beating and gassing as they went. The last battery of gas and grenades didn't end until 2:20 a.m. . .

An officer kicked a pedestrian in the groin, stabbed at him with his baton, then shot a beanbag point-blank into his chest. . . A man came out of his home to shout, "We are residents here!" He got a heavy dose of pepper spray to the eyes, courtesy of his local peace officer. A cop ordered two art students with a video camera to roll down their car window so he could talk to them, then sprayed them directly in the face.

Anyway. Things unraveled pretty rapidly in the days that followed. The WTO talks failed. The protestors and bystanders who’d been imprisoned were released. The police chief resigned and the mayor went on to lose an election. City council meetings were held, committees were formed, lawsuits were filed. But a few days after it was over, I was Christmas shopping downtown as if the whole thing had been some sort of vacation; the Disneyland version of life under occupation.

At the end of it all, I have no firm conclusions. The whole mess was just ten different flavors of bad. Egregious violations of civil rights, police officers thrown headfirst into a dangerous situation that they’d barely been prepared to handle, citizens attacked on their own streets. In a way, it strikes at the heart of what human beings are really capable of. All that ferocious insecurity and conviction. And where does it leave us? It ends with confusion and a series of anecdotes, and then it’s all but forgotten. What the oh.
Posted by Floor Pie at 6:55 PM

I think most anti-WTO activists consider the Seattle protest to have been a success in that -- as Jim Page sang -- we "shut it down." I heard Amy Goodman and her guests talking about it as a win. I'm ashamed to admit it, but without the protest I wouldn't have been at all aware of the problems with the WTO. So, at least on the front of raising awareness, it has to be considered movement in the right direction.

I wasn't nearly as politically energized then as I am now, but even then I felt a sense of pride that it happened here. No, I'm not so keen on the property damage, and I'm still shocked at the over-reaction by the police, but I'm glad the protests happened.

We were living downtown at the time and I got caught up in the pepper spray too. Thanks for this great reminder.