If You Want to Sing Out, Sing Out

“When more people experience the euphoric ecstasy that could be obtained by listening to beautiful music selections from rock to opera, more people will be less inclined to strife."
– Ken DeFeudis

It all began, like so many good things in life, with a Simpsons re-run. This was right around the time when Mr. Black and I were first married, and the episode was “A Millhouse Divided.” For you lovable non-geeks out there, that’s the one where Bart’s friend’s parents divorce and the dad tries to launch a music career with this demo tape: 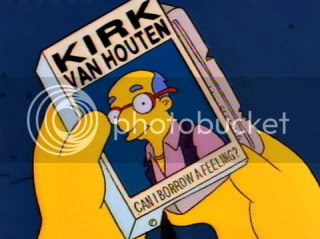 We’d seen the episode many times before, but for some reason that scene with the demo tape was really cracking us the hell up. Suddenly, Mr. Black remembered something and ran down to the basement to rummage through his old tapes. He emerged with this: 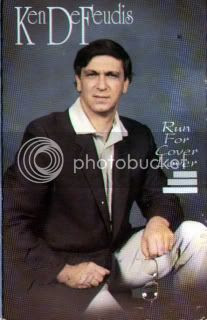 Mr. Black had been music director of his college radio station back in the day, a job whose benefits apparently included first dibs on midlife-crisis-guys’ demo tapes. We popped it into the tape player and . . . oh, how to describe it? Playful Casio keyboard chords, all two of them, bounced back and forth. And then, about a beat or two behind the electric drum from the get-go, in sailed the low, nasal, heavily Boston-accented goodness of Ken’s incomparable voice:

It was deliciously bad, of course. But also very intriguing. Who was this Ken DeFeudis, and what was his deal? Was there really a run-for-cover lover? Was Ken just a shallow midlife-crisis guy dabbling in music to get laid? Or was he a deep guy with a real story to tell who simply lacked the talent to give it the compelling presentation it deserved? He looked so earnest on the cover of his demo tape. Maybe he was like Mary Beth Hurt’s character in Interiors: a poet at heart, but no actual talent or motivation to execute the vision. I wanted to find out more.

A quick Google led me to the Web site of “Incorrect Music,” a weekly radio program on New York’s WFMU. The program featured, in its own words, “a misguided tour of musical outsiders, bumbling celebs, no-hopers, corporate anthems, pop-eyed zealotry, uber-patriots, insufferable kids, Third-Eye Lounge crooners, and a whole range of Frankentunes.” Naturally, our Ken DeFeudis was in heavy rotation.

I scrolled through the archives and found more Casio-heavy DeFeudis originals, including the spicy ersatz Latin number “Come Back, Serena” and “Lover Without a Cause” – which was largely a retread of “Run For Cover Lover,” replacing the frolicking chords with a more understated electric drum accompaniment. Ta-ta-ta TA-ta-ta, Ta-ta-ta TA-ta-ta, etc. Ken really let go and wailed on that one, and the lyrics were the most head-scratching of all:

I met her one day
In the usual way
I said ‘Oh what a sweet dear.’

And as time went by
Both her and I
Developed something
That was much more than mere.

Ken had a karaoke period as well, bringing his laissez faire sense of timing and Boston-nasal lowing to such classics as “Desperado,” “Me and Bobby McGee,” and “New York, New York.” Sometimes he’d even shout out the song title at the end of the song, community-theater-musical style. I was hooked.

After I plowed through all the archives, I learned that “Incorrect Music” posted its new shows on their Web site every Friday. And thus, our own reimagined radio days were born. Mr. Black and I would hurry home from work every Friday, whip up martinis using our wedding-present cocktail shaker, and gather around the old iMac hoping to hear the latest DeFeudis masterpiece.

It wasn’t mean-spirited in the least. We liked Ken. You kind of want to root for the guy . . . singing his heart out in the face of all obstacles like that. It was like some bizarro-world version of the bad American Idol auditions. Simon Cowell would have cut old Ken to ribbons with Ryan Seacrest cheerfully snarking as the TV audience cheered them on. Yes! Way to smack down those grandiose losers who think they’re good enough to sing on a TV show! Misguided ambition sucks!

There really is a “how dare you” factor when it comes to untalented artists, and not just on American Idol. It’s everywhere. And maybe it’s a little warranted, after all. Maybe it is a little insulting to those truly talented people who struggle to succeed, deserve to succeed, but never beat the odds. And then some pipsqueak comes along claiming to be a songwriter, sending his appallingly bad demo tapes all over the place unapologetically, rhyming “mere” with “dear” as if that’s all there is to great songwriting.

But who’s to say old Ken didn’t pour his blood, sweat, and tears into a song like “Lover Without a Cause”? Who’s to say he didn’t work as hard, believe himself to be as gifted, strive as much to be heard as any real artist?

In an attempt to learn more about Ken’s backstory, I stumbled across this dude’s blog, on which he’d posted some pages from Ken’s early-90’s press kit. As one might expect, it’s chock full of sweetly clueless claims like:

[Ken] fulfills his philosophical nature in the avenue of music, writing, and singing. He wants to live a long life and be creative. His fulfillment will not come until he’s completed the full cycle of his inborn talent.

Capable of singing opera, his flexibility enables him to write, sing, and ‘bop it up’ like the kids if he desires.

Every day, he says . . . Don’t try to wait until you know exactly what you’re going to write, paint, sing, or whatever, because if you do you may never start, don’t be afraid to make mistakes. You can always correct, improve, or scratch and restart. Your errors will show you what’s right. They may be your best teacher.

Hokey, yes. Badly punctuated, heck yes. But it’s not without a relevant message for those of us who dip our toes in the old “creative fulfillment” thing. Maybe we’re not the most talented at what we love to do. But maybe talent isn’t even the point. Just look at Ken, so joyfully engaged in the very process of music. And yes, his music happens to suck. But it’s a glorious kind of suck. It’s a suck that really puts itself out there, embracing the thrill of unbridled expression as well as the inevitable hurling of rotten tomatoes from his audience. And he seems to be having the time of his life. I can’t help but feel a little inspired.

We weren’t laughing at him. We weren’t even laughing with him. We were simply caught up in the momentum of Ken’s brash, wild ride of transcendently bad sing-your-heart-out joie de karaoke.

And I can’t think of a better example than Ken’s “New York, New York.” Miraculously, it’s still up on WFMU’s archives for your listening pleasure. Just click on this link and scroll all the way down to the show from December 19, 2001. Click on “RealAudio” and slide directly to 56:10 or thereabouts. You’ll be so happy you did.

Great...now I can't get "Can I Borrow a Feeling" out of my head.

Take my hand with your glove of love!

Awright! Someone who loves Defeudis' music for the same reasons I do.

A friend of mine who got that same "Run For Cover Lover" demo tape at a college radio station passed it on to me many years ago.
I was hooked and managed to also get a copy of many of the songs you mention.

I even corresponded briefly with Ken Defeudis around 1992 or so. He was pretty much the same way he was in his press kit.
I never asked him if it was a joke or serious, b/c I didn't care. I took it semi-seriously and liked it just fine that way.
(Unfortunately, I don't think I still have the two or three letters I got from him.)

Ken Defeudis died of cancer in Worcester, Mass., in October of 1994, only a year or two after we last exchanged mail.
To me, that added a certain poignancy to Defeudis' saga:
Had he been sick?
Did he decide that he wasn't sure how much time he had, and he was gonna let his muse out on the world, even on a small scale?
I'll never know.