If you’re one of those folks who hates overhearing laypeople discussing art in museums, you might want to skip this one. Overeducated though I may be, I’ve never set foot in even the most basic art history class. And I was never a big museum fan until Mr. Black and I started dating. My response to art is almost completely uninformed; a purely personal reaction. You’ve been warned.

I took a rare day to myself last Saturday and went to see “Edward Hopper’s Women” at the Seattle Art Museum. It’s a small collection of about ten paintings, most of which feature women alone in public places. In restaurants. On a train. Working in a movie theater. Sometimes she’s engaged with a male companion. Sometimes a man only watches from the shadows. Always, the woman is bathed in light, eyes cast downward. And always, the artist himself is that voyeuristic man in the shadows – which the museum’s signage made more than abundantly clear.

In fact, that was the overriding theme of the show: Hopper as fragile male voyeur-artist projecting unfulfilled desire onto his vulnerable, overflowingly sexualized female subjects.

The show begins with two portraits: One is Hopper’s self-portrait, gentle and shadowy with a hint of harmless brooding. The other is of Hopper’s wife Jo, an artist in her own right and the model for all his female characters. It’s the only portrait he ever painted of Jo herself, and it’s not a terribly flattering one. The sign makes sure we know how much she hated the portrait; practically offers it up as proof that Hopper painted sexualized women because his own relationship left him unsatisfied. (Take that, wives.)

As for the rest of Hopper’s subjects, the museum’s signs draw didactic attention to their supposed vulnerability and sexuality. The viewer is asked to ponder each woman’s story but encouraged to assume that she’s troubled by her life’s circumstances, engaged in a tawdry affair with her male companion, or on her way home from something seedy. The viewer is constantly reminded that the artist lurks in the shadows, mesmerized by his subject’s allure. By the end, I overheard patrons remark knowingly, observing the sexier female subjects in the paintings, “I don’t think he was very happy with his wife.” Message received.

As I said, I’m no student of art history. Perhaps the museum’s interpretation is undeniably true and the only accurate way to read these paintings. Or perhaps the museum felt the need to make the exhibit intriguing and accessible to the masses, so they opted to go with this simplistically sexy account. I don’t know.

But I do know that something compelled me to ride the bus downtown and spend an afternoon looking at the same ten paintings over and over again. And it wasn’t the artist-voyeur-male-angst-bullshit angle. I can accept that Hopper imposed a sexual reading on his subjects. But to me, that’s not what’s fascinating about them. I look at a painting like "New York Movie" and instantly relate to that woman. 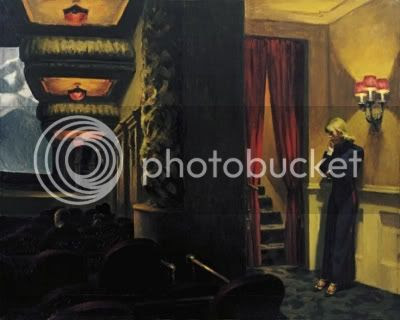 Take a step back and I am that woman in the painting, alone in a museum as groups of people stream by: Young artsy couples, older married couples, packs of crunchy-chic fiftysomething ladies, precocious art-loving children with their proud parents and bored siblings.

I am the only one here by myself, and I linger at each painting a long time. I’m savoring my quiet time and drinking in these mesmerizing figures, trying to reconcile my own response with the museum’s interpretation. I’m trying not to think about our family finances, which are not looking good. I’m wondering if I will buy a decaf hazelnut latte afterwards. I am drawn again to the light and swoops and curves in these paintings; to the women’s thoughtful faces. I am as bathed in light and vulnerable to a sexualized misinterpretation as any of Hopper’s subjects.

And haven’t we all been there? Just trying to have a nice walk or enjoy a beer with your girlfriends, and there he is. That guy. The guy who’s mistaken your lack of male companionship for a cry for help. The guy who’s mistaken your absent boyfriend for a no-good loser from whom he’d better rescue you. The guy who imposes his own misguided notions about lonely women onto your mundane, innocuous being. To him, you’re deep, tortured, and poetic; Anna Karenina with unwashed hair and ripped jeans. But really, you’re just on your way to the store to buy more toilet paper. And that lost look on your face just means you haven’t had your morning coffee.

I love my solitude. Even when I was single and sometimes lonely, I thrived on it. Oh, to just sit down at a counter by yourself and consume a plate of cheese fries with lots of ketchup. To walk by all your favorite apartment buildings in the city and wonder what it would be like to live there. To wander through a store and imagine what you’d buy if you could afford it. To watch all these intriguing people and overhear their conversations. To stand by a river and give the day’s worries over to its ripples and light.

And then …some guy tells you to smile. Or some passing car honks and shouts an insult. Or some smooth operator tries to lure you off for a drink. As if you’re there for them. Life is a beauty contest and they’re the judges, holding up numbers whether you’re officially participating or not. One thing I love – love – about being a mother is how the kids shield me from this kind of objectification. Pushing a stroller down the street, I’m free to be my sloppy old introspective self, either invisible or repellent to the lotharios on the street. (Funny how sexism sometimes works in our favor.)

I’d like to think that Hopper was somehow better than these guys. Perhaps he recognized his subjects’ introspection and thoughtfulness and somehow envied it. Such a public, unapologetic display of private thoughts. Or maybe it was just the opposite; maybe he was surprised to observe women engaged in the sort of poetic introspection typically attributed to sensitive male artists like himself. But then – here comes the sexism again – the only way he seems to represent this female thoughtfulness is to sexualize it.

The painting that drew me to the exhibit in the first place was, predictably, “Chop Suey.” It’s among Hopper’s most famous (second only to “Nighthawks,” I’d imagine), depicting two working women having lunch in a restaurant – a relatively new sight at the time it was painted.

These women are different from the subjects of the other paintings. (Even the museum eschewed its usual “look at the voyeur / look at the tramp” interpretation, focusing instead on the cultural history of women in the workplace and chop suey itself.) These women don’t look down; they look across the table at each other. Their faces are thoughtful, but more engaged, earnest, and hopeful than the faces of the other paintings. These women are luminous and sexy, but also very ordinary and seamlessly integrated into the setting. This is their place. They belong there. Hopper may be watching, but in this case it looks like he’s watching with detached admiration and respect. I’m sure of it.

That, and the fact that this painting is the most popular one in the exhibit, gives me hope. 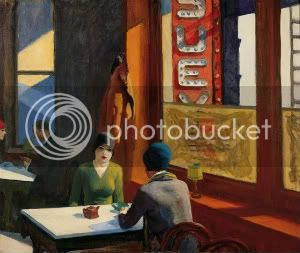 Well, I have taken graduate art history classes, and I think your commentary is really smart and has no need for a disclaimer. I loved reading this!

It's so interesting to think of the subjects in terms of modern feminism and having an existence that defies the painter's attempt to characterize them. And why should the author get the last word? And why should we read them as lonely just because they are alone? It's a fascinating way to rethink the works.

Thanks for this -- it really resonates with me. It's taken me 39 years to admit that I actually like to be alone.

Wow, thanks for articulating something - many things, in fact - that I've been thinking for a long time! Nicely done.

I definitely agree with the idea of communicating quiet introspection. I went to a Hopper exhibit in DC last year and that I got that feeling of being alone while surrounded by people from most of his paintings. Even in paintings where no people were pictured there was a feeling of comfortable solitude.

I didn't get the "sexualized" feeling from his paintings, even when the female subject was in a state of undress.